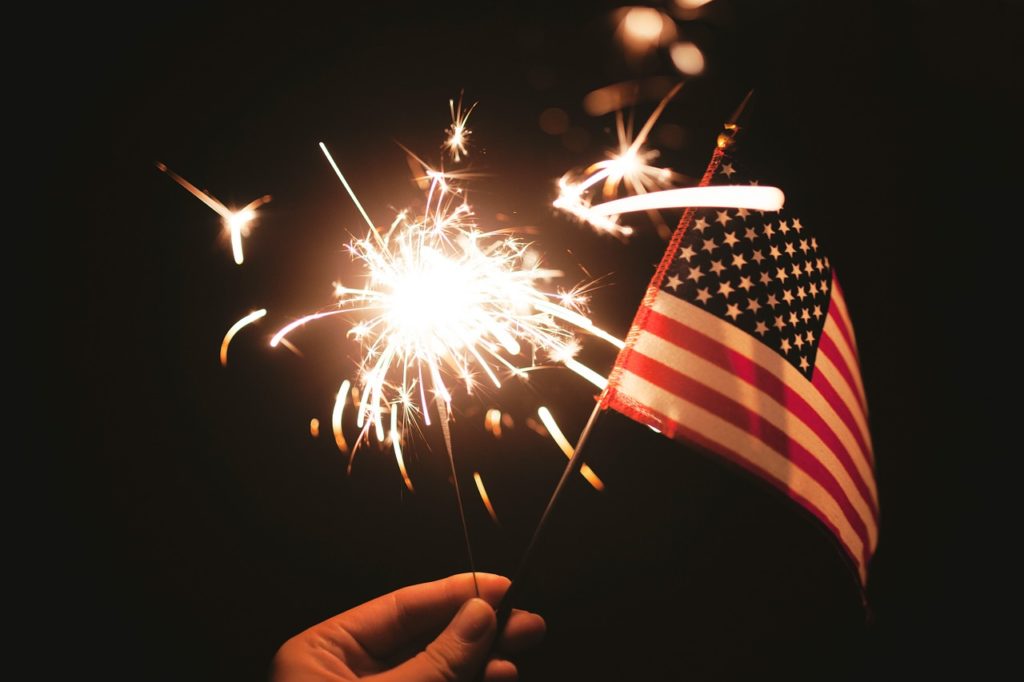 On July 4th, the nation sings Happy birthday to the United States of America.  This summer day is Independence Day in the US and one of the busiest travel and tourism holidays in North America. Flights coming to America and from coast to coast are full.  Hotels in the top July 4th destinations are packed and restaurants are busy preparing for the influx of guests. Every city in the 50 United States celebrate the July 4th holiday with fireworks because of the importance of this day to America’s history.

The Fourth of July commemorates the adoption of the Declaration of Independence on July 4, 1776 by the Second Continental Congress of the 13 colonies, meeting in Philadelphia. Congress established July 4th as a federal holiday in 1870.  The tradition of celebrating Independence Day with fireworks, parades and speeches spread from Philadelphia to other cities and towns across the new nation and began a lasting national tradition.  Today, the Macy’s Fourth of July fireworks show in New York City is the nation’s largest. Macy’s says more than 1,600 shells will be launched per minute during the 25-minute display over the East River. Other major fireworks shows include those in Chicago on Lake Michigan and in San Francisco over the San Francisco Bay and….

Washington, D.C. Leading the way in patriotic tradition, the nation’s capital hosts a fireworks extravaganza accompanied by a concert on the National Mall to honor Independence Day. Glittering, luminous fireworks are launched high into the sky from the reflecting pool area in front of the Washington Monument – visible from multiple locations. This eagerly anticipated sensory-overloading event is televised nationally, and is one of the most popular in the land, so those wishing to celebrate in person are encouraged to arrive early for optimal vantage points.

New York City, N.Y. “Start spreading the news…”  New York City’s fireworks are displayed on the East River.  The extravaganza brightens up the sky above the Big Apple with plenty of evening sky sparklers. Residents and tourists alike have a plethora of great viewing options along the river, and even from boats sailing in New York harbor. The Brooklyn Bridge as serves as a backdrop for the show of sound and light.

Boston, Mass. The city’s annual free Boston Pops concert and fireworks event draws an audience of over a half million visitors and tourists who flock to the banks of the Charles River. Accompanied by performances from major recording artists, the show takes place on two nights (July 3 and 4th), beginning at 7:30 p.m. starting with the national anthem – and culminating with Tchaikovsky’s 1812 Overture, a fitting finale featuring authentic cannon fire.

Philadelphia, PA It’s no surprise that the cradle of liberty throws one of America’s biggest birthday parties. The city’s “Welcome America” celebration features the Fourth of July Jam and Fireworks concert on the Benjamin Franklin Parkway against the backdrop of the iconic Philadelphia Museum of Art. Across town, the festivities continue on July 5 along the Delaware River waterfront. With views from the Marina, Penn’s Landing or Wiggins Park in Camden, NJ, both sides of the river can enjoy the Adventure Aquarium’s Waterfront Fireworks celebration’s massive pyrotechnics display, featuring an accompanying soundtrack that pays tribute to America and the Armed Forces.

Chicago, Ill. With major fireworks displays taking place all summer long throughout the city, Chicago residents and visitors have the chance to view the evening shows from a variety of locations. A favorite spot is Navy Pier, where the best firework views are from the shoreline – as well from aboard cruise boats on Lake Michigan. The sky is illuminated, with the accompaniment of synchronized music and sound enhancing the aesthetically impressive display.

San Diego, Calif. This Southern California city celebrates Independence Day with a variety of big events throughout the entire county. The island of Coronado hosts a two-hour parade followed by a family concert and spectacular fireworks over Glorietta Bay. The Port of San Diego celebrates with its Big Bay Boom fireworks extravaganza over San Diego Bay. The LEGOLAND Resort in Carlsbad celebrates July Fourth with Red, White and Boom, with special family activities throughout the day and fireworks starting at 8:30 p.m. Finally, La Jolla’s popular Fourth of July gathering features fireworks over La Jolla Cove beginning at 9:00 p.m.

Portland, Ore. Portland has plenty of nighttime skyrockets and celebratory events throughout the entire Fourth of July weekend, and the city offers an array of viewing spots around town. For music fans, Portland’s Safeway Waterfront Blues festival is the place to be for Independence Day – and for enjoying fireworks, too. With over 125 performers on four stages, this four-day event July 3-6 is one of the largest blues festivals in the nation with major recording artists like Gregg Allman, Los Lobos, Maceo Parker and more. Want more? Fort Vancouver in Vancouver, Washington hosts a fireworks show just on the other side of the Columbia River – about 15 minutes from downtown Portland.

Atlantic City, N.J. The Atlantic City fireworks festival, “We the People, By the People, For the People Fourth of July Fireworks” electrifies the sky above the Atlantic Ocean. This free event attracts more than 250,000 people who enjoy the views from along the world famous seaside boardwalk, as well as Steel Pier and many of the area’s beachfront venues. Most of the casino resorts also have select locations for optimal fireworks viewing. The dazzling display does not disappoint; the show’s fireworks are launched from three locations and it takes two ocean barges and one marina platform to light up the island’s entire sky.

San Antonio, Texas Stars and Stripes over San Antonio is the city’s largest and longest Fourth of July fireworks display. This family-friendly event is held downtown each year, celebrating those who are serving the US armed forces. Located at the Alamodome, the event will include a “kids zone,” as well as live music and plenty of food, too. Fireworks start bursting in air at 9:30 p.m. and are set to a patriotic medley of synchronized songs broadcasted on the local radio station Q101.9 FM. (Free admission for children and military families, and adults pay a nominal fee).

Fort Lauderdale, Fla. What better place than to enjoy a fireworks display on a beach in Florida.  Fort Lauderdale’s beachfront bash under the stars is the city’s specialty.  In addition to fireworks, Fort Lauderdale’s Fourth of July spectacular also features music from exciting live bands, culinary specialties and games. This event also hosts a family “fun zone” all day long – from 12:30 p.m. to 9:30 p.m.. The explosive rainbow of flashing color starts at 9 p.m. and is conveniently located near the main drag – off the intersection of A1A.