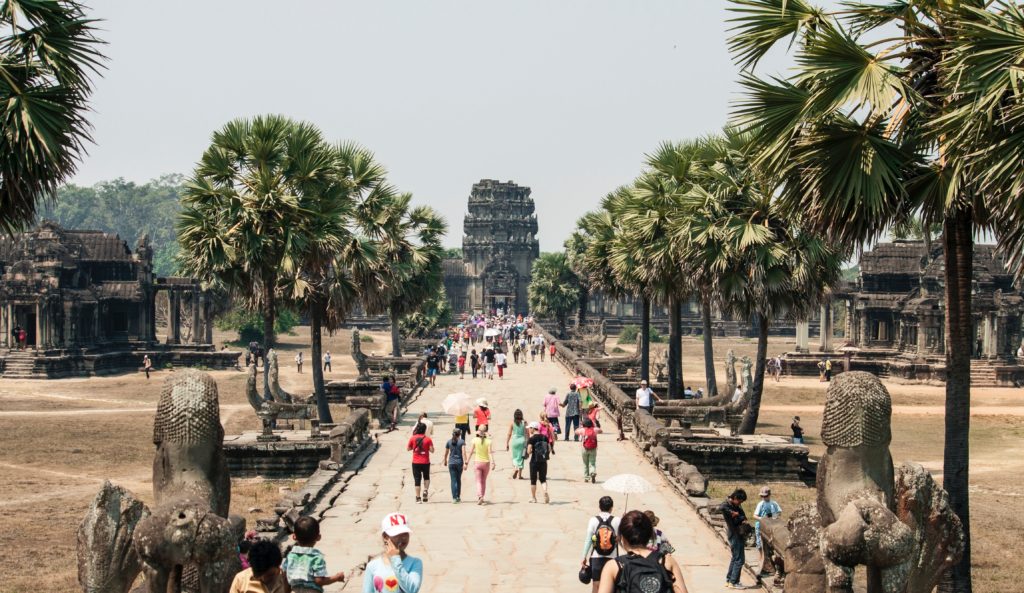 When you think of Cambodia, first impressions can come with some very negative connotations. After all, it was here that civil war and one of the most notorious genocides in the world took place in the late 1970’s. However, majestic temples and a fascinating culture have re-emerged in force throughout this beautiful nation to overshadow the dark past from which it suffered for so long.

Yes, today the low cost of travel in Southeast Asia is one of the main reasons for such popularity with backpackers in particular, but then Cambodia is also known for having a large array of genuinely interesting attractions. From Angkor Watt and the idyllic towns of Kampot or Kep, to Tuol Sleng Prison and the ominous sight of Bokor Hill Station. Here are some simple insights and easy ways to find more cultural experiences in Cambodia:

Avoid the crowds at Angkor Wat in Cambodia

It would make no sense to visit Siem Reap and not witness the awe inspiring temples nearby. Once home to the powerful Angkor Kingdom, this region is populated with a huge number of majestic temples and luscious undergrowth everywhere in between. In fact, it is often the surrounding nature which makes this such an incredible place to explore as seen in the vines which strangle every stone at Ta Prhom – the famous temple which was used in Tomb Raider the movie. While this is undoubtedly a popular place for tourists, it is still possible to avoid the crowds by leaving the main temple early and venturing to the spectacular Angkor Thom while the crowd is enjoying the sunset.

Simply put, strolling around these temples with nobody in sight is an experience in itself.

Choose Kampot or Kep over Koh Rong and Sihanoukville

Many tourists completely miss the towns of Kampot and Kep, for the fact that they focus their time on the main highlight mentioned above. However, both of these are easily reached by bus from the capital of Phnom Penh and offer a very unique alternative to nearby Sihanoukville. Featuring a variety of old rundown colonial houses and a peaceful beach front, Kep can feel like stepping back in time while the busier town of Kampot has a much more lively atmosphere. That being said, the reason for visiting either of these destinations is to see another side of Cambodia and experience a small slice of local living away from the main attractions and tourist crowd.

Do not miss Tuol Sleng Prison (Genocide Museum) in Cambodia

Most hostels, hotels and agencies in Phnom Penh will offer a tour to the Killing Fields and Tuol Sleng Prison. However, for some reason many visitors opt for a trip to the Killing Fields and not the infamous prison. Unless you find this kind of thing too upsetting, this genocide museum should not be missed and offers a far greater insight into what happened during the late 1970’s. In fact, there is a minimal amount of information at the Killing Fields in comparison with the prison so if you only had time to visit one of these, it should absolutely be the prison itself.

For those of you who feel comfortable renting a motorbike in Cambodia, Phnom Bokor National Park is perfectly located with reach of the above mentioned Kampot. However, this region would be worth any amount of travel even just to see the majestic Big Buddha statue at the top of the first major climb. Winding through beautiful scenery, the drive itself is nothing short of spectacular and culminates with a visit to Bokor Hill Station.

Although this is quite well known, most visitors opt not to visit the attraction as they believe it is too far but this should absolutely not be the case. Built by French forces in the 1920’s, the building was designed as a luxury hotel but it was eventually abandoned when the Khmer Rouge took power. Featuring spectacular views and a truly haunting appearance, the Bokor Hill Station is free to enter and the perfect excuse to venture so far out into the countryside.

While many attractions in Cambodia are remnants of a troubled period and quite crowded, this is not the case everywhere you go and cultural experiences are always possible if you look in the right places. At the same time, even if these places do sometimes point to a tragic past, it cannot be denied that they have contributed to such a strong re-emergence of culture in this beautiful country.