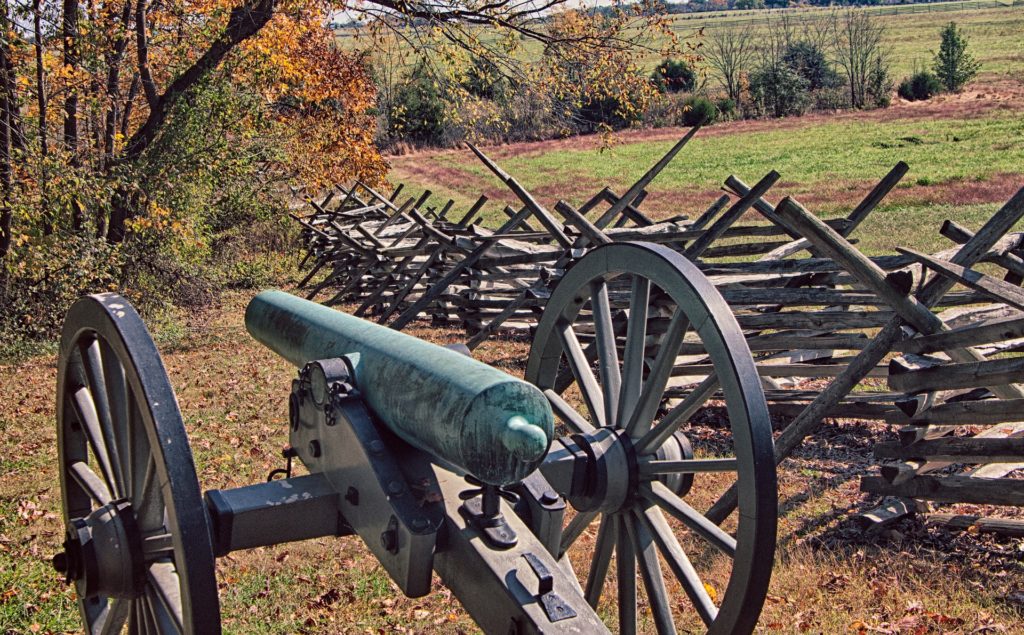 An Overview of the Civil War

The American Civil War was waged between 1861-1865. It stemmed from increasing tensions between the North and South concerning the issues of states’ rights and slavery. The tensions increased after Abraham Lincoln was elected president in the year 1860. In the ensuing months, a number of southern states seceded to form their own government, titled the Confederate States of America. Although the Confederate States were initially successful in several battles, the battles at Gettysburg and Vicksburg were turning points that sealed their fate. Ultimately, the South surrendered in April of 1865.

Though the Civil War is a dark portion of America’s past, it is our collective history, nonetheless. There are numerous American Civil War sites to visit if you are a history enthusiast. Each one affords a unique opportunity to step back in time and carefully examine the formation of the United States and the historic circumstances surrounding the Civil War. The following is a list of seven significant historical sites where major battles of the American Civil War was waged.

Perhaps one of the most venerable Civil War sites, Gettysburg National Military Park, located in Gettysburg, Pennsylvania, serves as a memorial to one of the bloodiest battles in America’s history. This three-day battle in July of 1863 led to 51,000 fatalities, and ultimately, the Gettysburg Address. Gettysburg National Military Park offers many ways to experience an immersive historical experience, including the “Battle of Gettysburg” cyclorama painting by French artist Paul Philippoteaux, a museum that showcases an immense collection of relics, tours by Licensed Battlefield Guides, and showings of A New Birth of Freedom, an informative film narrated by none other than Morgan Freeman.

Located in Sharpsburg, Maryland, Antietam National Battlefield was the site of the bloodiest day in the American Civil War. Within twelve hours, approximately 23,000 troops were either killed, wounded, or left missing in action. It was after this catastrophic bloodshed that President Lincoln crafted one of the most famous historical documents to date, the Emancipation Proclamation. The Antietam National Battlefield features a museum store, a self-guided 8.5-mile auto tour starting at Dunker Church, and a short introductory film, as well as Park Rangers who are available to discuss the history of the battlefield. The site also offers self-guided hikes, a battlefield scavenger hunt, exhibits, a visitor center, and the Pry House Field Hospital Museum.

Well-known for the First and Second Battles of Bull Run, Manassas National Battlefield Park was where the Confederates witnessed the height of their power. Strategically located in Manassas, Virginia, this is also where General Thomas J. Jackson was dubbed “Stonewall Jackson” for his tenacity on the battlefield. Manassas National Battlefield Park offers tourists many attractions, such as a 6-minute fiber-optic battle map, a Visitor Center Museum, tours with Park Rangers, exploration of Henry Hill Loop Trail, a tour of Stone House, a trip to Brawner Farm Interpretative Center, self-guided tours, and a hike of the First and Second Manassas Loop Trails.

The Battle of Shiloh raged for two full days, from April 6-7 in 1862, and caused approximately 23,000 fatalities. It took place in Shiloh, Tennessee, and was the largest battle to occur in the Mississippi Valley campaign. Shiloh National Military Park includes multiple commemorative sites, including the battlefield itself, Shiloh National Cemetery, and the Shiloh Indian Mounds. The Shiloh Battlefield contains an auto tour comprising 12.7 miles and 20 stops. These stops are strategically located at the Peach Orchard, the Albert Sidney Johnston death site, and the Hornet’s Nest. Museums, interpretive centers, and special events are just a few of the attractions housed within Shiloh National Military Park.

The Battle of Franklin

On November 30, 1864, the Battle of Franklin broke out in Franklin, Tennessee between Union soldiers led by John M. Schofield and Confederate troops under the command of John Bell Hood. The fighting lasted five hours, and casualties quickly mounted to 10,000 troops. Despite intense efforts, there has not been an official national or state park established, but the battlefield and surrounding sites have been preserved. Three key sites, Carnton Plantation, Carter House, and Lotz House, hold an especially valuable historic role. Carnton Plantation, once a private residence, found itself in the middle of the Civil War when it was spontaneously converted into a battlefield and hospital. The antebellum home is still open to tours today: individuals may traverse the property, visit the on-site museum, admire the preserved gardens, and learn the history of the plantation. The effects of war may also be observed in the Carter House, where bullet holes fill the walls. When the fighting began, the Carter family and neighbors sheltered in the basement. Behind the house, there is now an interpretive center and many relics. Not far from here is the Lotz House, which showcases posh American Victorian furniture and is listed on the National Historic Register. During the Battle of Franklin, the Lotz family sheltered with the Carter family while a cannonball destroyed their roof. Tickets are sold to the public to tour these historic homes, once caught in the midst of the Civil War.

In Vicksburg, Mississippi, a 47-day siege was waged over control of the Mississippi River, a major point of contention between Union and Confederate forces. Control over this river meant the ability to limit food and supplies, making it a strategic location. As Ulysses S. Grant attempted to capture it, Confederate forces fortified the area using riverfront artillery batteries and a ring of forts erected around the city, displaying over 170 cannons. Despite the show of strength, Confederate forces were ultimately defeated. Today, Vicksburg National Military Park proudly exhibits over 1,300 monuments, markers, and tablets dedicated to the area’s history. The site showcases the USS Cairo Museum and Gunboat, as well as occasional living history events and demonstrations, and offers multiple tour options including licensed park tour guides, cell phone driving tours, and self-guided driving tours.

Appomattox Court House National Historical Park, located in the state of Virginia, is famous as the place that marked the end of the American Civil War. It was here in the McLean House that General Robert E. Lee and General Ulysses S. Grant met, and General Lee surrendered. This occurred on April 9, 1865. Appomattox Court House National Park features many relics, one of which is the very pencil used by General Lee to sign his surrender. The park also contains approximately 8 miles of hiking trails, and many birding opportunities across its 1,696 acres. Its on-site theater seats 70 individuals and plays the film Appomattox, With Malice Toward None on the hour and half hour.