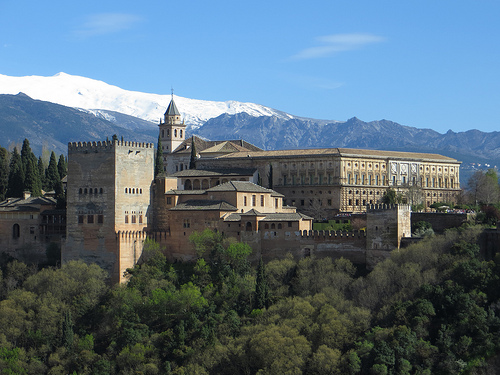 Among the great architectural miracles of Spain, one place breathes exuberance and style, representing one of the most beautiful structures made by man. The palace of Alhambra is one of the most popular tourists destinations in Spain, with millions of visitors each year. The historical palace and fortress of Alhambra are located in the province of Granada in Andalusia, a charming region of southern Spain. The complex, listed in the UNESCO World Heritage, is a unique example of the medieval Muslim Spain and Moorish rule over southern Spain. The name derives from the Arab term of Red Castle, because of the red walls of the complex, contrasting with the green forests that surround it.

Situated near the city of Granada in a strategic point, overlooking the city and the surrounding area, the fortress complex will truly amaze any art and architecture lover, with some exquisite interior design masterpieces that cannot be found anywhere else. Although the first mentions of this place start from the 9th century, as a fortress guarding over the city, the site became a royal residence of the Nasrid dynasty in the 13th century. This started the glorious period for the Alhambra complex, being enriched with extraordinary new additions through the centuries that followed. Among the many buildings that form the complex of Alhambra, tourists can visit the Moorish Palace, the baroque palace of Karl V, a church that was built in the place of an old mosque and many other amazing landmarks.

It is believed that although the Spanish kings sought to destroy all evidence of Islamic rule over the territories they re-conquered at the end of the 15th century, the Alhambra palace was so beautiful that they could not bring themselves to destroy it. The interior of the palace is truly astonishing, a testament to every style of classic Arab art, with calligraphic, floral and geometric decorations that form a unique and fascinating ensemble. The Islamic art shown inside the Alhambra complex is one of the most amazing examples found anywhere in the world.