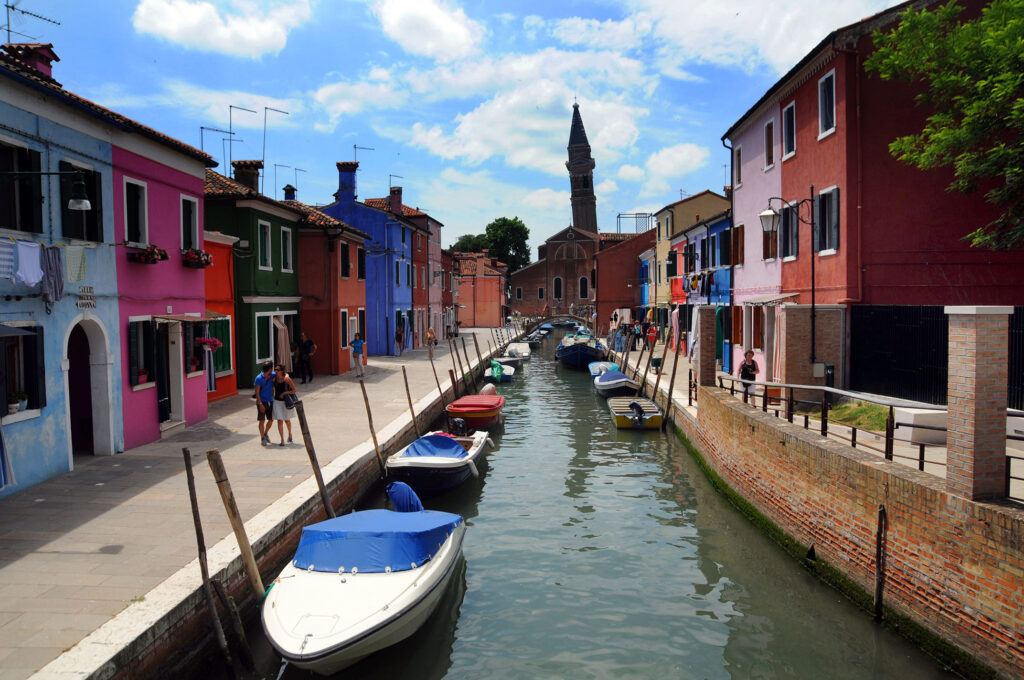 The express ferry cuts its way through the tranquil waters of Canal Grande, rippling like a gigantic, translucent copper sheet in the morning sun. Majestic mansions and medieval cathedrals, with their ornate facades, pass by on both shores.

I am on my way to Burano after spending three days in Venice, wandering through its warren of alleyways, exploring some of the smaller canals that slice their way through the quaint, less-touristy neighbourhoods and hopping over endless cafes for the perfect cup of joe or a fine glass of Italian Chardonnay. I decided to break free of the enduring allure of Venezia in favour of the seductive charm of Burano – Italy’s rainbow island.

Italy is dotted with its fair share of incredibly beautiful islands, but Burano is the most prismatic of them all with the kaleidoscopic facades of dainty, medieval houses flanking the shores of this small island. Legend has it that the vibrant colours made it easier for the fishermen to find their way home amid the dense fog that enveloped the lagoon when they were returning with their day’s catch. The rainbow palette was synchronised in a way so they could distinguish their own house from that of their neighbours. In fact, laws are still in place whereby the residents of Burano need to adhere to a prefixed colour scheme when they repaint their houses, so that no house sticks out as an eyesore in a colour coded neighbourhood. A thriving tourism scene can well be the underlying reason for this, but it has definitely helped retain the island its fairytale charm with its intense palette.

Fame and charm has a few disadvantages. For Burano, it is an endless influx of daytrippers landing on its shores, and wielding selfie sticks in front of every photogenic window for an instant upload to social media handles. Thankfully, it is midweek and I have started pretty early from Venice. So Burano’s waterfront streets are relatively quiet when I arrive. A quiet stroll along the banks of the canals feels like walking through a canvas splurged in a symphony of hues that provide harmonious contrasts in the glistening reflections on the calm canal waters strewn with fishing boats.

After a few minutes of leisurely walking, I step into the town square. This is the famed Piazza Baldassare Galuppi, named after a celebrated 18th-century Venetian composer, whose statue stands erected in the middle of the expansive plaza, where the chief attraction is the San Martino Church. The rather plain exterior belies the fact that this 16th-century Roman Catholic Church houses a fascinating legend and an exquisite painting that narrates it within its dark interiors. The story goes that a huge sarcophagus containing the remains of three saints washed ashore on the banks of Burano. The gigantic stone coffin was brought to the church by the children of Burano with the divine intervention of the three saints themselves. The sarcophagus now lies protected inside the church and a 17th-century painting inside the church illustrates the miracle. Legend has it that the three guardian saints also intervened to save Burano from the devastating plague outbreak in 1670.

My next pit stop is Museo del Merletto, just a few steps from the San Martino Church. Located inside the historic  palace of Podestà of Torcello perched right on Piazza Baldassare Galuppi, the Lace Museum is hosted inside a former Lace School. The exhibition downstairs traces the origins of lace-making and how the craft spread through parts of Europe. The four rooms upstairs display an extensive collection of glamourous and sophisticated lacework samples in tiered cases. The piece de resistance is an exquisite bridal veil and a christening dress. An assortment of books, paintings and journals showcase the evolution of the craft from the 16th to 20th century, and one of the rooms operates  as the workstation for local lacemakers. No ladies are at work though, I find only empty seats under old photographs of the Lacemaking School that operated here till 1970.

I come out of the museum into the sun-kissed Galuppi Square, which is now teeming with tourists. Wedging past the pop-up souvenir stalls, I find my way through the cobbled lanes and quaint wooden bridges to a restaurant on the banks of the green canal. It is an idyllic setting hemmed by a multihued mélange of square-shaped houses, local children wheezing past on their bicycles and a motley group of elderly women laughing and chatting in front of a door, painted in fluorescent pink. A scrumptious lunch follows where the highlight is risotto di go: a traditional Venetian delicacy invented in the 1500s by the fishermen of Burano. The broth in which the rice is cooked and creamed gets its flavourful notes from goby, a typical fish of the Venice lagoon. It’s now time to leave this paradisiacal island. I take a leisurely walk back to the verdant meadow adjacent to the ferry station, where the sculpture of a young woman in distress bears brilliant testament to the creative genius of Remigio Barbaro, the world-renowned 20th-century sculptor, who lived in Burano. From here, I take a boat ride to Murano, an island famous for its glassblowing tradition. But that is another story.