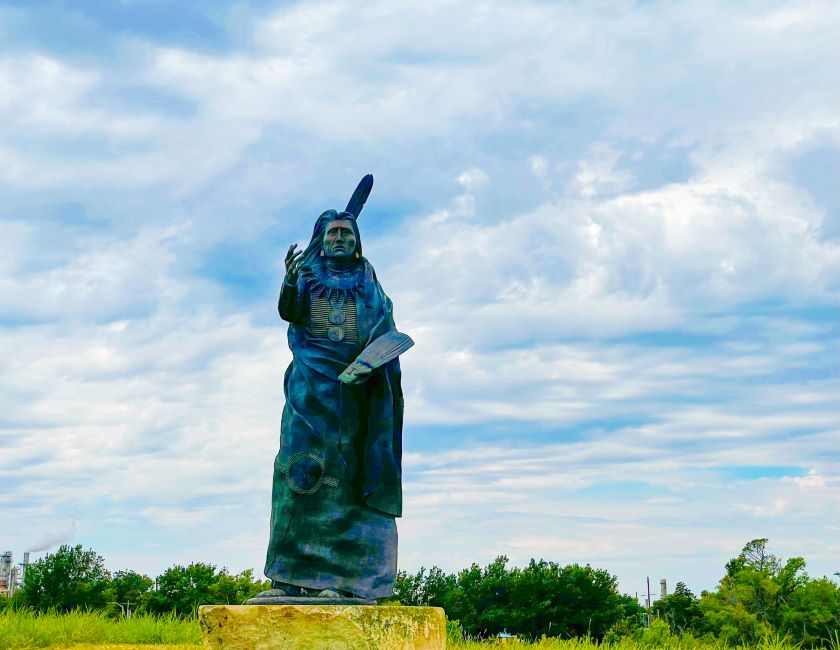 People travel to Oklahoma to boat and fish on its many lakes, hike its numerous trails, explore oil baron’s mansions, and gaze in wonder at the star-studded skies over the Black Mesa. Many trace the places where oil men created enormous wealth with black gold, where outlaws hid out in the hills,  the countless locations where cowboys rode the range, and where the five civilized tribes settled in Indian Territory.

However, there is a lesser-known story. Yet one that exemplifies enormous courage and one which has had an immense impact on our nation. It is a story of forced settlement, death, devotion, and incredible spirit. It is the story of Chief Standing Bear.

Standing Bear was the Chief of the Ponca tribe in the 1800s. Federal troops removed the tribe from their original tribal home in Nebraska and forced them to settle in Indian Territory in Oklahoma. This move took place during the blazing hot summer of 1878. The journey was difficult. Many perished on the trip, and others became extremely ill. They arrived with little food and no time to get crops started in the summer heat. The tribe was in a strange land with few provisions and no assistance. At the end of 1878, another casualty of the disturbing move occurred. Standing Bear’s sixteen-year-old son passed away. Before his death, the son had pleaded to be returned and buried in the sacred burial grounds in their homeland of Nebraska—not this strange inhospitable place where his spirit would roam forever, not finding a resting place. The Chief wanted to honor his son’s wish. So, a very courageous Standing Bear began the long, arduous trip back to Nebraska in the frigid cold of December, carrying his son’s remains—and without the required permission from the government. He was arrested and charged.

General George Crook heard his story and acted with compassion. He secured the assistance of attorneys to file a writ of habeas corpus questioning whether the Chief’s detention was even legal. But the government, in response, stated that as the Chief was not deemed a “person” under the law, he had no right even to file the petition. So the trial began—one to determine Native American personhood.

The Chief’s Courage to Fight for Civil Rights

The landmark case ended in May of 1879. The judge did not make a habit of allowing a defendant to speak. Yet, for some reason felt moved to offer that opportunity to the Chief. Standing Bear stood proudly to address the court. He extended his hand, and, with the assistance of an interpreter, most eloquently spoke these words, “My hand is not the color of yours, but if I pierce my hand, I shall feel pain, and if you pierce yours, you too shall feel pain and the blood that flows from mine will be the same color as yours. I am a man. The same God made us both.”  The Judge responded by settling in favor of the Ponca chief—he was a “person.” Standing Bear became the first Native American judicially to receive civil rights under our country’s laws. He paved the way for all American Indians to be recognized and given the same protection as the white men.

I grew up in Ponca City, Oklahoma, and many civil rights stories were told when I was in school. But I do not remember this one. And I would guess that it remains largely untold. But I am thankful that now the legacy of this early Native American leader in civil rights is being honored at the Standing Bear Park and the Museum and Education Center in Ponca City, OK. Community leaders and leaders of the six area tribes worked together to create and build this facility to educate and serve as a memorial.

The Standing Bear Park is a 63-acre park. A walking trail winds its way around the eight completed acres, with each of the six area tribes having an area for quiet contemplation. But the focus is the 22-foot bronze statue of Chief Standing Bear with hand outstretched, standing tall and overlooking the base inlaid with the names of the eight clans of the Ponca Tribe. As I walked the trail, I could not help but feel peace and a sense of pride over what this man dared to fight for and ultimately achieve—not by aggression, but by the power and truth of his spoken word.

The Museum and Education Center on the property contains artwork, photographs, statutes, and displays, all to educate about this rich cultural heritage. The early pictures and artifacts provide a fascinating look at these various tribal histories. In addition, I found the descriptions of the different tribal dances to be engaging and beautifully done.

To further appreciate this heritage, one could attend the annual Standing Bear PowWow held the last Friday and Saturday of each September on the grounds of the Park. This event brings together all six local tribes—Ponca, Kaw, Osage, Otoe-Missouria, Pawnee, and Tonkawa. It is a celebration of their heritage with singing, dance competitions in full regalia, drumming, and, of course, enjoying the traditional cultural cuisine.

For me, it is difficult to believe that there was a time in our history when these feelings existed—to exclude others from our law’s protection based on cultural differences or skin color. An ugly time to be sure. However, I find the story of Standing Bear to be a story of incredible devotion, courage, and strength. May we all remember that if we pierce our hands, the blood that spills forth is the color of every other human we meet. And we all feel pain. These are indeed great words of wisdom from Chief Standing Bear. 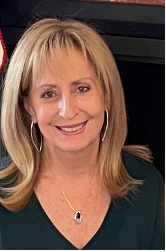 Lana Van Cleave is a retired CPA having survived 43 tax seasons. She is now embarking on an encore career — freelance travel writing. Her trips include glamping in the RV to indulging in luxury hotels; hiking in National Parks to cruising on a catamaran. She has traveled in the United States, in Italy and other foreign countries. She is a member of the IFWTWA, TravMedia, and Travel Writers’ University. She has written for various online publications. Follow her at www.createsomedaytoday.com and on Instagram @lanavancleave.