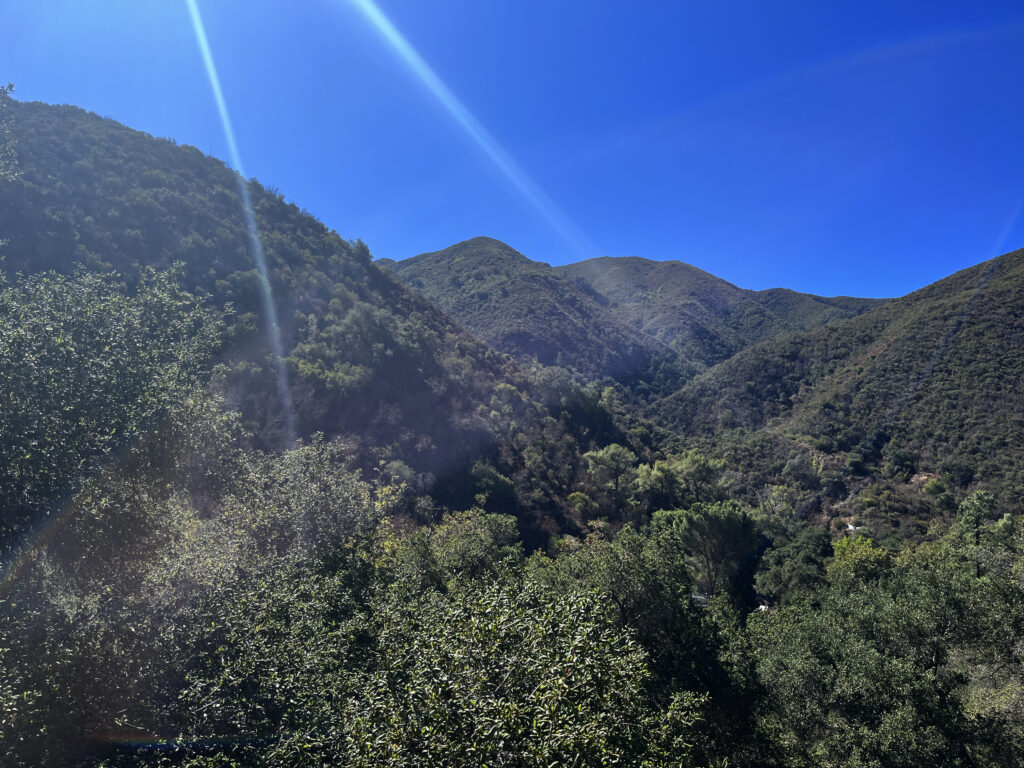 Bedford Peak is totally off most people’s radar

After one of my previous hikes through the famous Blackstar Canyon trail inside the Santa Ana mountains of California, I decided to go back and explore the area some more. Just like last time, I put the Silverado Canyon Market in my GPS to locally stock up water supplies and power bars. I tend to always do this in order to get valuable knowledge from locals before heading out.

When speaking to the cashier at the Market I asked about the surroundings and what hike he would recommend. The cashier instantly recommended Maple Springs Trailhead as one of his favorites–a trail located at the end of the street that I followed to enter the town of Silverado. He indicated that this trail would lead up to an outstanding view of Bedford Peak, mostly known to locals only. Bedford Peak can be reached via a 12 km (7 miles) roundtrip hike and is located at an elevation of 1161 meters (3800 feet), offering an outstanding 360° view over the surrounding mountain range as well as the adjacent valleys. On days with good visibility, Lake Matthews can even be seen from there. I had a feeling this would be good so I grabbed my purchase and headed out.

After I left the market, I followed Silverado Canyon Road for another 2 miles and reached the designated parking lot. It is quite easy to find this place, since the street actually is a dead-end road. The parking structure holds space for about 6 or 7 cars with some additional opportunities for another 5 cars underneath the surrounding trees. Before heading out to Bedford Peak, it is important to visibly place a Forest Adventure Pass inside the car. Large signs at the parking structure make sure you don’t forget it. If you are in no possession of such a pass, purchase one at the market for 5 US$ when passing through Silverado.

Starting the hike to Bedford Peak

Once I left the parking structure, I followed the paved road for about 2 minutes and reached an opening that seemed to serve as additional parking. After I briefly looked around, I spotted a small wooden pole that had a red arrow on it pointing towards the bushed located at the foot of the mountain. Since it is in the partly shady area underneath trees, it can easily be missed.

It is therefore crucial to immediately turn left once entering the opening/parking structure. About 30 seconds later, once I passed the wooden pole, I reached a barrier blocking the way. Although it almost looked like it was placed there to keep people from continuing, I followed the footsteps leading around it and began my hike to Bedford Peak on a very narrow path leading through some dried-out bushes.

A few seconds after passing the barrier, the surrounding bushes and trees immediately disappeared, leaving the trail completely exposed to the merciless Californian midday sun. Although I carried 3 liters of water with me, I realized that it could be challenging. Another 15 minutes later, I turned around and ultimately realized the incline of the trail, as I was already enjoying an amazing view of the mountains surrounding Silverado valley. Since the trail is nicely winding itself around the mountains, I could always see where I was coming from, making it incredibly easy to track the process of the hike over time.

Being able to always spot the trail was not only a gift, but it also felt like a curse. As I was moving forward, all I spotted ahead of me was incline. In fact, there were only two inclines: Steep and steeper. Is slowed down my pace and decided to carefully regulate my water intake better. Running out of water in such a heat could have been dangerous. What kept my mind from thinking of the challenging endeavor too much was the view. The fact that the entire trailhead was exposed to the sun also meant that there was always something to see. After every corner there was another breathtaking picture of the surrounding Santa Ana Mountains.

Navigation gets a bit harder when reaching the top

After about 1.5 hours, I spotted a plateau ahead of me and got super excited. “This must be it” I thought. As I got closer, I saw a pole holding a large American flag and thought “Yes, this must definitely be it”. While I was taking pictures of the flag, another hiker, coming from the opposite direction, approach me. A little chat quickly revealed that this was not Bedford Peak. In fact, this place was just a helicopter landing space. Good to know. And so, I moved on.

A few minutes later, the hiking trail ended up meeting Main Divide Road, which had a large white gate to the right. Whether or not this gate is always open, I don’t know. However, this is the right way to get to Bedford Peak.

At this point is it important to understand that this road is no longer a hiking trail. In fact, it is used by lots of dirt bikes and off-roading trucks. Since it is a very winding road, approaching vehicles may not spot your early, so walk carefully. 10 minutes after passing the large white gate, I faced another barrier. Rusty and twisted it was located on the side of the road.

Although it didn’t strike me as a hiking trail, the area behind it did somewhat look like it was worth a try. After all, I didn’t think that the hike should keep leading me over the same road used by cars. Gladly, I checked this path out. It led me right up to Bedford Peak, which, if I had followed Main Divide Road, I had simply missed.

The views were amazing up here. I sat down, unpacked my lunch, and stared into the distance. While doing so, I constantly had to change my seating position, so that I would see everything around me. I even had a clear look at Lake Matthews down in the valley. Just as I was about to head back down, I spotted a little, orange container, which was placed next to the pile of rocks holding the elevation sign up straight. Angry about people leaving their trash, I picked it up, ready to carry it down with me. The indefinable sound of a smaller object moving inside the container got me curios, so I opened it. Luckily, I did! It turned out not to be trash after all. Someone had placed a pen and paper inside the container for people to write down their name and dates of the hikes. What a nice and unexpected thing to find! Gladly, I wrote down my name and the date, placed the container carefully back where I had found it, and headed back down the same way I came from.

If you want a hiking experience without hundreds of other tourists, this is your place! However, this hike can be pretty demanding, especially during summer months. Not only the incline itself, but also intense heat required to carry a lot of water. Forest Adventure Passes are required to be displayed inside the car and can be purchased at the Silverado Canyon Market for 5 US$. If you are up for an even more intense hike, the same hiking trail that leads towards Bedford Peak beautifully continues over the mountain ridge, connecting the path to Modjeska Peak (1676 meters / 5500 feet).