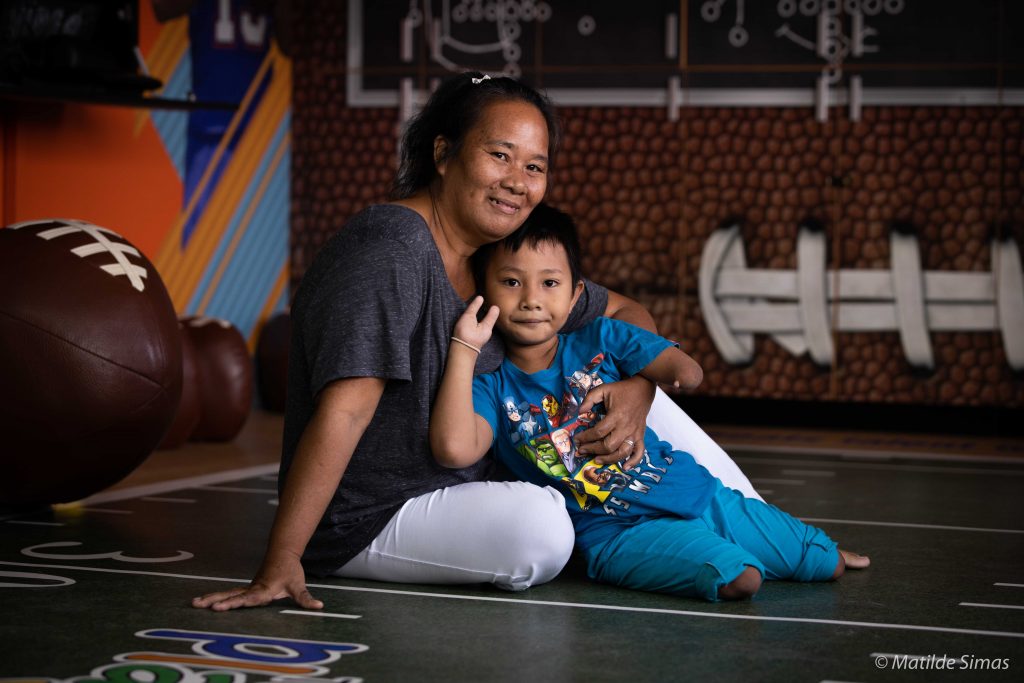 Creating 19 prosthetic limbs for 13 children in under a week might seem like a daunting task, but Robert Schulman has never shied away from a challenge. The certified prosthetist and founder of US-based nonprofit Limb Kind Foundation arrived in Davao City, Philippines in September with a team of 11 and a big goal. And he definitely delivered.

As a member of the media team, I got a unique look into the inspiring work that Limb Kind does — and the kids whose lives they change. It gave a new meaning to traveling with a purpose.

Though visitors to the Philippines often revel in its white-sand beaches, unspoiled natural wonders, and incredible diving, there’s another side to the country — one that most don’t get to see. Despite having an employment rate of nearly 95 percent, there is a massive income disparity and more than 20 percent of the population lives below the poverty line.

There is also a concerning lack of quality medical care, due in large part to outdated equipment, antiquated training, and a shortage of health care professionals. Congenital anomalies remain among the top 10 causes of infant and child mortality in the Philippines. And while there is no official registry in the country, research suggests that about 19.1 percent of the anomalies are musculoskeletal, including those affecting the feet, legs, and support.

In Davao City, Mindanao, Tebow CURE Hospital offers free pediatric orthopedic services to treat these conditions. The hospital was home base for the Limb Kind team for the week.

Making the most of a busy week

This was only Schulman’s second group trip — the first being to Haiti in February of this year. It was such a success that he brought an even bigger team to the Philippines, comprised of three other prosthetists, two physical therapists, three amputee mentors, and a three-person media team. Each played an important role in ensuring the plan for the week went off without a hitch.

The patients, who ranged in age from 3 to 23, were remarkably well adapted, considering the degree to which they were impacted by their limb differences. Prosthetist Duffy Felmlee was struck by a key difference from what he sees in the US.

“Here, we see a lot of congenital, multi-extremity involvement,” he said. While most American patients tend to be traumatic amputations, he explained that nearly all of the Limb Kind patients here were born this way. This creates a unique challenge for the prosthetists. “Most of our interventions are lower extremity. Some of our high school age patients are already incredibly independent, so we have to balance that out. Will our intervention improve quality of life?”

Once the patients were assessed, measured, and casted, the prosthetists went to work creating the limbs — and the kids got to have some fun with the amputee mentors. From trips to the zoo to spa and sports days to more serious discussions about how to care for prostheses, the mentorship activities were a critical part of the experience because they allowed the kids to spend time with people just like them. That’s something that doesn’t happen often here.

“I thought people in the US have full legs,” said Princess, a 10-year-old with limb differences affecting both arms and legs. For her, spending time with Nicole Grehn, a bilateral amputee who lost both legs above the knees in 2015, was inspiring. Seeing an American nurse with prosthetic legs meant that anything was possible — and that she could achieve her dream of playing badminton with her friends and one day working in business.

Delivery day brings all the feels

Six days after the team’s arrival in the Philippines came delivery day. Everyone told me it would be an emotional one, but I wasn’t prepared for the intensity of the emotions I felt seeing the kids take their first steps on new legs. Sure, there was fear, anxiety, and worry — many of them had never walked like this before. But most of all, there was hope.

I watched as one mother broke down after seeing her 18-year-old son — the ninth of ten children in the family — walk on two legs for the first time in his life. And as two little girls, five and seven years old, held hands while confidently taking steps across the physical therapy room in front of a cheering audience. I stood by as 15-year-old Rex modeled his new leg for the camera, and couldn’t help but smile as 19-year old Nelvin, who told me just days before that his biggest challenge was getting places quickly, ran up the ramp outside the hospital (under the watchful eye of mentor Robert Rodriguez, of course).

There’s no question that the 19 limbs that Schulman and his team delivered brought mobility and independence to these kids. In the parents’ eyes, though, I saw so much hope. Hope for their children to live a fuller life than they perhaps initially thought possible. Hope that the bullying would no longer be an issue. Hope that their children would now have a chance to feel ‘normal.’

Not goodbye, but ‘see you later’

While this was Limb Kind’s first time in the Philippines, it certainly won’t be the last. Schulman already committed to a return trip next year — and each year after that. The announcement was met by big smiles from the kids, parents, and hospital staff alike. After all, it meant that it wasn’t goodbye, only ‘see you next year.’

Next up for Schulman is Ethiopia in February 2020, where he will again partner with CURE International to deliver prostheses to children in need.

If you would like to learn more or make a donation to Limb Kind Foundation, please visit www.limbkind.org. CURE International, Limb Kind’s host in the Philippines, offers volunteer and outreach opportunities around the world. Learn more on their website. Matilde Simas is an American documentary photographer and the founder of Capture Humanity. Her work focuses heavily on the beauty of the human spirit and aims to show the dignity of every subject. To view more photography by Matilde Simas please visit: www.matildesimas.com.