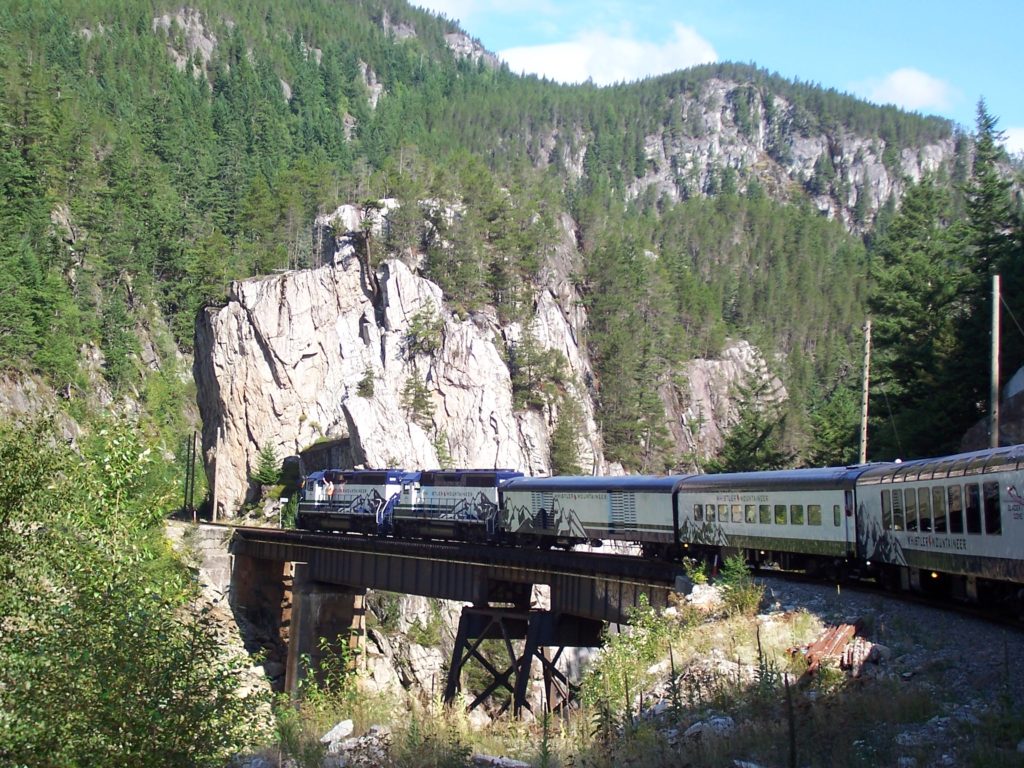 As we started the day a bit on the sleepy side, our taxi transported us to the Rocky Mountaineer Station on the outskirts of downtown Vancouver.  Over 500 passengers were gathered in anticipation of a long journey from the coastal British Columbia rain-forest through the Canadian Rockies into the desert (yes, there is a desert in Canada!) on the way to our overnight stop in Kamloops.

We started the morning with a champagne toast with the friendly and attentative Rocky Mountaineer crew-members, providing the ultimate in service on board the bi-level Gold Leaf Rocky Mountaineer car.  The service is a throwback to a golden age of railroading, with tablecloth meal service with all the food and drink one could imagine.  The views from the observation level of the car, with windows that turned into skylights as they reached toward the ceiling of the car, were astounding.

About forty miles into the trip, we passed through the town of Hope, the Chainsaw Carving Capital of the World, where we learned that Sylvester Stallone put the town on the map with the shooting of “Rambo, First Blood.”

Tonya celebrated her birthday on board the train, as the crew presented her a birthday card and railroading book.  And that celebration continued as we made our way to Kamloops, British Columbia.  Kamloops is the third largest city in British Columbia, and as the train pulled into town, we were greeted by Royal Canadian Mounted horses.The highlight of our evening in Kamloops was the Great Canadian Lumberjack Show, where we shared our table with a wonderful couple from Australia.  The crowd at the show was from all over the world.  Before the Lumberjack Show, acoustic folk singer Margit Bull of Whiskey Tango led the audience in singing “Happy Birthday” to Tonya.

The Lumberjack Show starts with a brief film on the history of logging in Western Canada, and then the competition between a father and son in real life for best lumberjack got underway.  Throughout the stump chopping, log sawing, and axe throwing competitions, the competitors peppered the audience with a bunch of double entendres that would make Will Ferrell proud.  Will, there’s a film idea here based on the macho lumberjack culture.

The crosscut saw competition paired the two lumberjacks onstage with two ladies from the audience. The show concludes with a best two-out-of-three grand log rolling contest.  All in all, this was a memorable night in Kamloops.