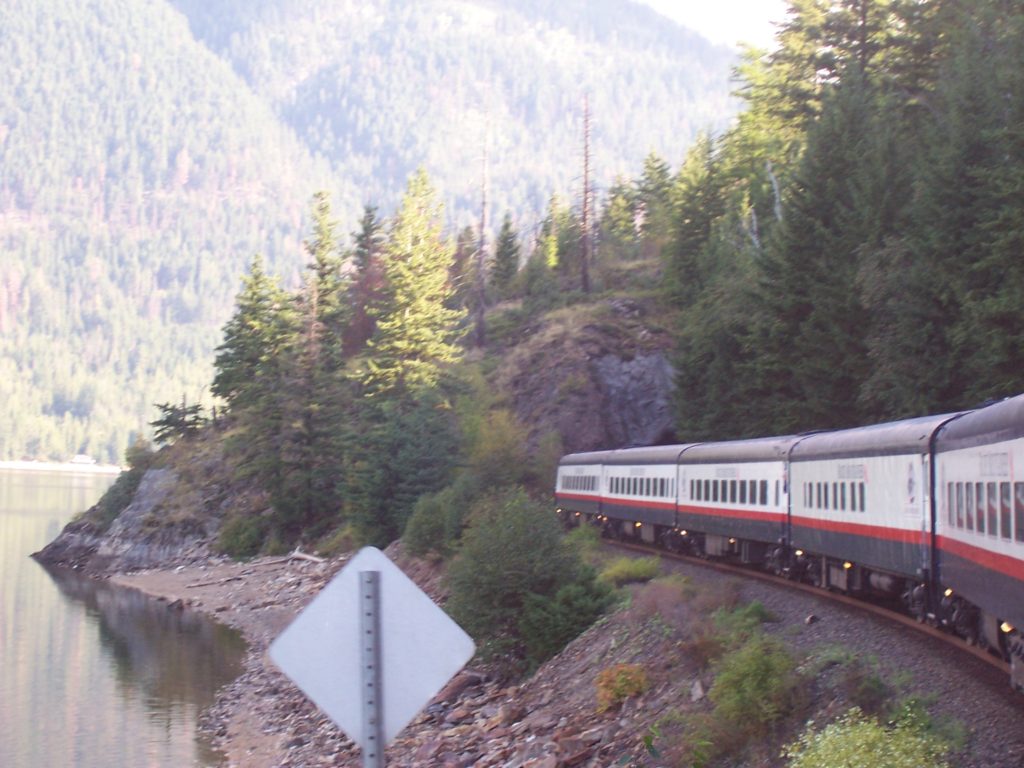 Last night we checked into a great resort—the Douglas Fir Resort & Chalets.  The resort is set in a wooded area above the town in a remote area and we were given a very nice two-level, loft chalet.  The room has a real fireplace, a full-sized kitchen, an extraordinary view of the surrounding snow-capped mountains and lots of small wildlife.  Bliss!!!  Plus, our kitchen was stocked with breakfast food (bacon, eggs, bread), milk, cereal and coffee.   Across the street are a Hostel and another resort—both facilities have restaurants.  Of course, one offers more finer dining than the other so we ate at the resort.

We woke up early (again—ugh) to an overcast and cold morning but eagerly awaited our transportation into town where we were to board a sightseeing bus.   The Brewster Discover Banff Sightseeing Tour took us to many natural attractions including the wind-shaped hoodoos which tower majestically over the valley, the classic viewpoints of Surprise Corner along Tunnel Mountain Drive, the Bow Valley Falls and the valley from the base of Sulfur Mountain.  We were also treated to a cave excursion to view a hot sulfur spring and then we traveled to the base of the Banff Gondola where we traveled up the mountains and through clouds aboard a gondola.

During the ride up the mountain we met a new friend, Nigel Allom, a lovely fellow traveler from Australia who is taking one year out of his life to travel.  (Incidentally, Nigel will be appearing on our show a few times over the next few months as he discovers North American.  Also, it is noteworthy to share that this is the second time Nigel has spent a year traveling.)  The views from the top were spectacular.  Although the heavy cloud coverage near the base of the gondola prevented us from seeing the village below, the peak to peak views of the surrounding mountains and the clear skies provided an amazing view.  It was like heaven!

After the tour we headed back to town to grab some “pub grub” in town before we took a scheduled boat tour of Lake Minnewanka.  Lake Minnewanka lies in the heart of the Canadian Rockies in Banff National Park, just a short drive from the town site.  Our tour consisted of a very interesting 1.5 hour interpretive tour of the Lake and surrounding area.

Following the lake tour we took a taxi to the Banff Upper Hot Springs—something that we’ve been anticipating since before our trip.  Our taxi driver was a very well-dressed man (John) who originated from Manhattan (he carries a dual citizenship).  John shared that we were the second “celebrities” that he’s had the pleasure of meeting within the last week–the first being Marisa Tomei.  We initially thought that we’d spend ½ hour in the thermal pool but we ended up soaking up the healing sulfur-filled water for nearly two hours.  The outdoor pool treated us to a view of the Banff Gondola and surrounding snow-capped mountain tops.  It was such a relaxing place and the smell of the sulfur (which smells like rotten eggs in its purest form) did not overshadow the clean mountain air. The only reason we left when we did was because we were hungry.

We took the public bus ($2/pp) back to our resort (the public transportation system is very affordable and convenient.  We will share many of our travel tips to this region at the end of our journey).  We decided to eat at the Hostel’s restaurant across the street and we were pleasantly surprised at the huge portions and quality of our very affordable meals.  The hostel had a bar and offered free internet to its guests.

Tomorrow we finally get to sleep in!  We will be traveling to the lovely area of Lake Louise where we’ll stay for two days.