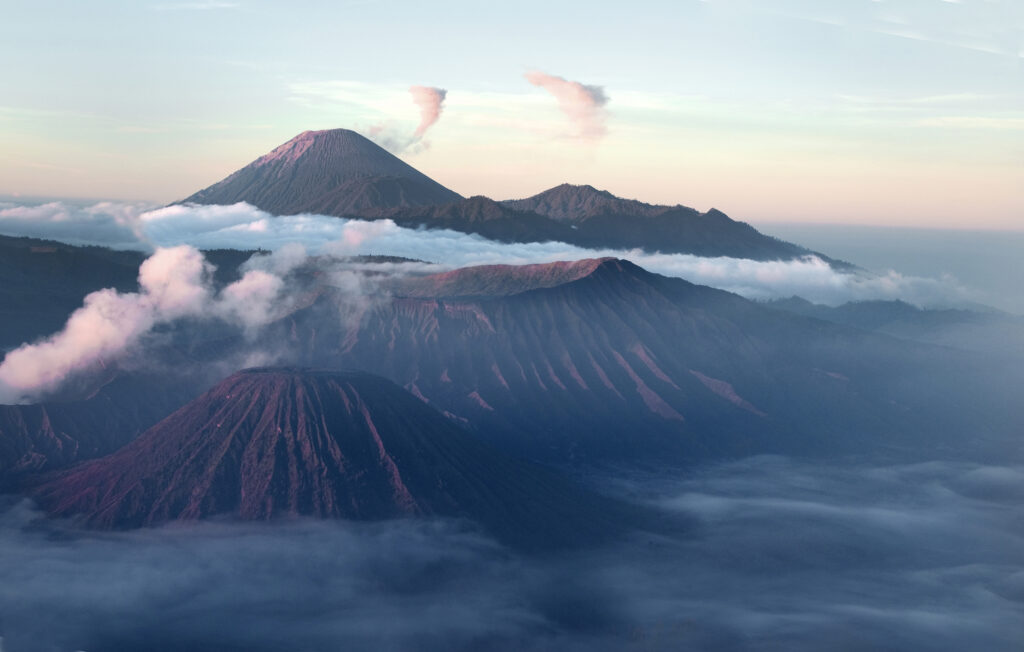 The small village of Cemoro Lawang is perched on the fringes of an undulating stretch of fine volcanic sand. This is Laut Pasir which, in Javanese, means Sea of Sand. My hotel, Bromo Permai, has a charming lobby that overlooks this unsettlingly unearthly territory.

“Five hundred years ago, my ancestors came through this route,” Sewak, my Tenggerese guide to this part of East Java, points to the far north in the desert where Mount Semeru (3,676 metres), one of the most active volcanoes of the Indonesian archipelago, belches out another thick volley of steam into the fading evening sky. It’s the third time in the last half an hour. Mount Bromo (2,329 metres), sitting rather idly in the middle of the sandy plain, looks like a sidekick beside the formidable Semeru. But its peculiarly shaped summit—an inverse cone formed when the entire top had been blown off during an eruption—belies a violent nature. And it continuously spews off sulphurous smoke inside its crater. Tomorrow morning I will go there.

The rest of the evening I remain engrossed in the fascinating history of the Tenggerese, a minority tribe who had settled around this barren volcanic caldera five centuries ago. Sewak’s sunburnt, mustachioed face becomes animated as he recounts the story of Princess Roro Anteng and how she fled with her husband, Joko Seger, from a band of marauding invaders who had attacked their homeland in the lush green plains of Central Java.

With a small group of followers, they crossed Laut Pasir on horses and mules and set up their new kingdom in these volcanic plains and named it Teng-ger using parts of their respective surnames. And the people came to be known as the Tenggerese, with strong roots in Hinduism, a legacy of their lost homeland.

The next morning I wake up at 3:30 and gulp down some strong Javanese coffee to ward off the last vestiges of sleep. A 1970s-era Toyota Land Cruiser is waiting for me outside and after a short ride of 15 minutes that involves many twists and turns, I reach the base of a dirt path that seems to lead on to the scattering of twinkling stars overhead. I am at the base of Mount Penanjakan (2,770 metres) and from here it is a trudge uphill over a thick carpet of volcanic ash. For a while, it is only a sound of collective heaves and sighs and the soft thud of hiking boots on the steep trail, lit up by the beams of headlamps of the sunrise trekkers. As the trail eases after about 40 minutes, the eastern sky turns a pale violet. I reach a flat surface in another 20 minutes and find a vantage point that overlooks the valley below. While the twin mounds of Bromo and Semeru looked foreboding and desolate last evening, the soft morning light has metamorphosed the volcanoes into ethereal outer-worldly hills floating in an ocean of clouds that seem to rise from the valley floor!

Coming down at the base of Mount Penanjakan I replenish myself with a hearty breakfast of Mee Goreng (fried noodles with eggs, fresh vegetables and a generous topping of peanuts) for the next course of action—a two-hour walk over the Sea of Sand to the summit of Mt. Bromo. I could take a ride up to the drop-off point in the 4WD Landcruiser but I am tempted to wade through the arid moonscape—a swirling dustbowl dotted with horses trotting across it. The eerie landscape is fringed by barren deep-fissured mountains all around and it is hard to imagine that beyond the 10-kilometre stretch of this Laut Pasir lies the greenest tropical valleys. Mount Bromo looms in the distance, a layer of dust lovingly encircling its base. Sewak points to a small complex of buildings at the foot of the volcano. “That is Pura Luhur Poten, the Hindu temple of the Tenggerese,” he informs, “and every August our Kasada festival starts from there.” I ask him about the ceremony. “There is a colourful procession in which all the thirty Tenggerese villages take part. It ends up there.” and he points to the slightly collapsed head of Mount Bromo, grey-white fumes shooting out of it.

Shortly, we arrive at the base of Mount Bromo, where a long flight of 245 stairs goes up straight to the rim of the crater. A lone horseman disembarks from his saddle near us and Sewak talks to the diminutive old man reverentially. He is a high priest of the Tenggerese tribe and as we go up the stairs he tells me an ancient tale. The royal couple—Princess Roro Anteng and Joko Seger—were childless. They prayed and meditated on Mount Bromo for many days before the crater opened and the god of the mountain, Hyang Widi Wasa, announced that they would be given children, but the last born would have to be sacrificed back to the mountain.

25 children were born to Roro and Joko, but they broke the promise, refusing to sacrifice their last born, Prince Kesuma. A dreadful eruption of Bromo followed that swallowed Kesuma into the volcanic crater.

Almost as soon as the story ends, we reach the rim of the volcano. From up here, the ruggedly barren expanse of the Bromo Tengger Semeru National Park is looking straight out of a set of a drama with horses and men moving slowly through its sandy-brown textures. I look down into the cavernous interiors of the crater. The fissured slopes converge down into a huge, dark cauldron from which sulphurous smoke shoots skyward with a thick, pungent smell. “During Kasada, the Tenggerese come up here and throw fruits, vegetables and livestock into the crater below to appease the god of the mountain,” the old priest says.

“If the god is not satisfied with our offerings, he erupts,” he concludes in a simple tone of finality.

Cover: Sunrise over the volcano complex of the Tengger caldera. Photo: Sugato Mukherjee