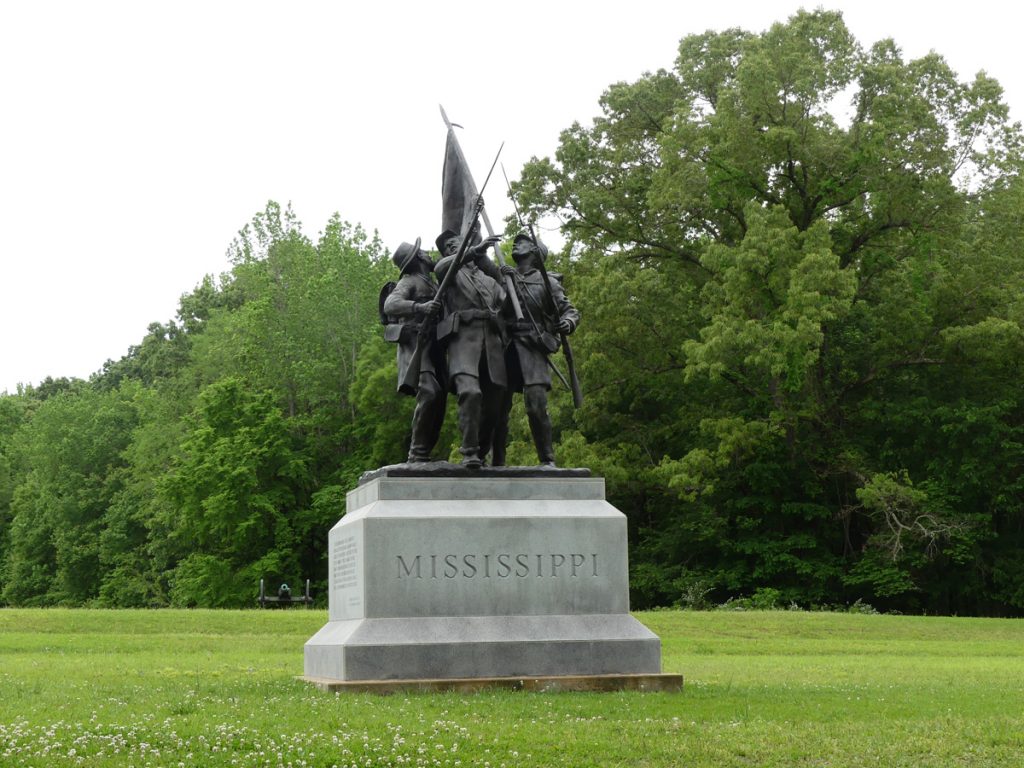 Can you imagine a piece of real estate, not more than a few square feet, worth the loss of over 30,000 lives? That is the case in Corinth, Mississippi, where two railroads cross. The Civil War placed this small Mississippi town in the crossroads of history by making it a prime target for Union forces and a must-defend-at-all-costs location for the Confederacy.

Located within the Shiloh National Military Park, the Corinth Civil War Interpretive Center tells the story of the railroads that crossed in Corinth and led to two Civil War battles for control that were some of the bloodiest ever fought.

After the video, I met our tour guide, Ranger Ashley Berr, by the fountain, behind the central building. The fountain is an overview of the United States history from an artistic point of view.

Berry, the Interpretive Supervisor at the center, explained the symbolism of the fountain, which represents the first 100 years of U.S. history through water and stone. In the beginning, “you see 13 waterfalls,” Berry said. “At this point in time, these colonies are states, so they represent the 13 states. They flow into one stream, which represents our country. As a state enters the union, they have to decide whether they are slave or free.”

A Fountain Represents the History of the U.S.

Southern states are depicted on one side of the stream and northern on the other. “At the point representing the 1860s, the start of Civil War, the water becomes congested and slopes downward and splits into two streams,” Ranger Berry said.

The split represents the nation’s split in two and within the water are stones that are labeled and represent about 50 battles and campaigns. The bigger the block, the bigger the battles’ casualties.

At the end, the two sections of the fountain come back together signifying the ending of the war. Three blocks here also representing the 13th, 14th, and 15th amendments, granting freedom, citizenship to slaves and voting rights to black men.

This is called the Reunification Bridge. A plaque reads, “The Civil War was fought over issues of liberty. The cost was high and many of these issues remain to be resolved.”

Inside the interpretive center, the museum’s exhibits explore the fountains visual depiction in several rooms. Besides the theater, artifacts and placards tell the story of the battle for Corinth, which lasted from April 29 to May 30, 1862, resulting in a Union victory.

After Corinth fell to Union forces, African Americans faced another kind of crossroads. Many fled their places of enslavement and built a town two miles away, under the Union army protection. It was called the Corinth Contraband Camp because the former slaves were known as “contraband of war.”

The town had cabins, a church, school, and hospital. The community grew crops and shared in the profits. For the first time, they were paid for their labor. According to Ranger Berry, the camp accommodated 400 acres of crops and housed several thousand people. There is no known photograph of the camp, which was abandoned in December 1863, when all the residents moved to Memphis.

In 2008, artist Larry Luger built six life-size bronze statues for the center to commemorate the camp along a quarter-mile walkway where the original Contraband Camp was built. The walkway entrance sign shows a woman leaning against a fence welcoming other former slaves. There are statues of a laundress, a farmer, a woman teaching a child to read, an African-American soldier, and a boy handing books to a Chaplin.

The artist, Luger, created some of the interpretive bronzes using current rangers at the center as models, including Ranger Berry. Luger memorialized her by placing her thumbprint on the washwoman sculpture. In February, the center will release an augmented reality app, with a video that tells each stature’s story.

There are few records of camp residents after the war but one of the 1,000 men from there who joined the 1st Alabama Regiment of African Descent, later called the United States Colored Troops, is an ancestor of former first lady Michelle Obama.

The Shiloh National Military Park, which includes, the Corinth Interpretive Center, stretches across both Mississippi and Tennessee and includes other sites. After exploring in Corinth, I drove about a half-hour across the Tennessee line, to the Visitor’s Center Museum in Shiloh, which is larger. It’s here that one of the bloodiest battles in the entire Civil War took place. The video, Fiery Trial, which recreates the battle and events leading up to it, is available for view at the center.

The visitor’s center includes information on some of the men who fought here but were remembered later for other accomplishments. Included is Henry Morton Stanley, who has the distinction of being the only soldier to serve in the Confederate army, the Union army and the navy. He is better remembered for his famous question when he found the missing explorer Dr. David Livingston in the wilds of Africa, “Dr. Livingston, I presume?”

Union General Lew Wallace, who fought here, is remembered as the author of Ben-Hur. Less well known is that as Governor of New Mexico Territory, Wallace signed Billy the Kid’s death warrant.

Touring the Park by Car

The visitors center has a self-guided 12-mile auto-tour with marked stops at battle sites like the Peach Orchard, the Hornet’s Nest, General Johnston’s death site, and other important spots. I found the battlefield to be the most fascinating part of the park, especially the replica of the Shiloh Church from which the battle took its name.

Another section of the park contains the Shiloh National Cemetery, where 3,584 Union soldiers are buried, 2,357 of whose identities are unknown. There are also two Confederate graves. The Shiloh Indian Mounds National Historic Landmark, a pre-Columbian site whose purpose is unknown but may also be burial sites, is located on battlefield grounds.

With its rich American history, Corinth is a hidden treasure for visitors.