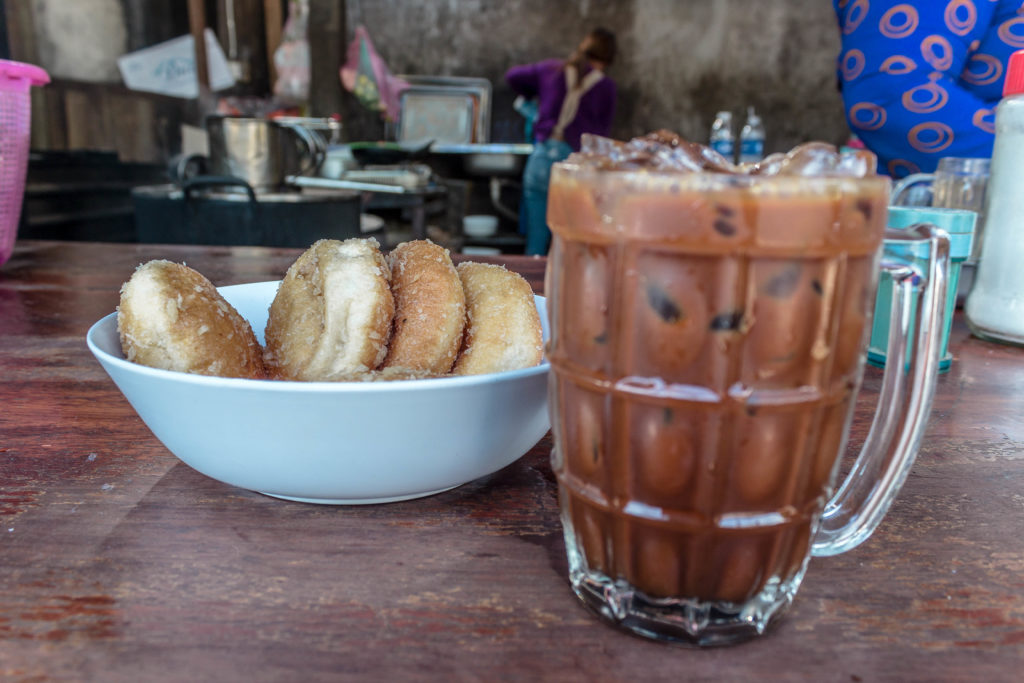 When people think of Southeast Asia, Thailand and Vietnam often come to mind first. But squeezed between them is Laos, a country covered in dense jungles and lush mountains perfectly suited for growing coffee, a relatively new crop that has grown recently in importance to the nation’s economy. Coffee plantation tours, cafes that source their coffee from local growers, and coffee farm homestays are creating alternative income for families in rural Laos as well as enjoyable opportunities for visitors.

A Perfect Climate for Coffee

With its high temperatures and accompanying thick humidity, Laos is an ideal place to embrace a slower pace of life and sip away an afternoon over coffee. Coffee here is typically served to tourists in cafes over ice with a heaping layer of condensed milk.

Locals particularly love their coffee early in the morning after Tak Bat (almsgiving). A true observer of Lao culture will know that the day hasn’t started if there hasn’t been coffee. Locals aren’t concerned about having a fancy flat white, and in fact, they prefer instant coffee doused in Teapot milk, the way you’ll find it served at most street stalls.

Coffee Comes to Laos Via Colonialism

Despite having the ideal conditions to grow the crop and local enthusiasm for the finished product, coffee hasn’t always been at the forefront of Lao industry. Coffee was brought over by the French in the early 1900s, but it only became a crop of major value in the 2000s after the Lao government opened its borders to tourists and Laotians turned to coffee growth after an aggressive opium clearing program.

In 1998, the Lao government began burning existing opium fields to ashes in an attempt to make the country “drug-free” after the Opium War of 1967. The Northern Hill tribes of Laos depended heavily on the growth and sales of opium for their livelihood. It was their main cash crop and Laos, together with Myanmar and Thailand, produced an estimated 70 percent of the all the opium sold globally in the 1970s. When Lao opium fields were destroyed in the late 90s, farmers were left without the income stream that supported them for years. These farmers should not be misconstrued as drug mules. Opium was an acceptable source of income for people who, according to the United Nations Office on Drugs and Crime, earned per capita incomes as low as $300 per year. With the new anti-drugs stance of the government, the people of Laos were forced to figure out how to use their land in a new way.

French colonists had planted coffee in the volcanic soil of southern Laos before the outbreak of World War II. While coffee growth continued in the south long after Laos gained its independence in 1954, farmers in this region primarily focused on growing rice in their fields since it is a staple food of the Lao diet. In northern Laos, rice production was an incredibly tricky process due to the steep mountain terrain and dense canopy coverage. Consistent fog and cooler temperatures add a delicate extra layer of work for farmers. If the rice plants somehow made it to harvest, the yields were low in comparison to the labor involved. So, after the banning of opium, northern tribe farmers developed a way to produce shade-grown coffee.

Coffee and the Boom of Tourism

Coffee as a new cash crop for Laos was timed perfectly with a boom of tourism. Weary travelers hopping off slow boats from Thailand into the little UNESCO town of Luang Prabang were always looking for a shot of espresso to get them going. Coffee production led to coffee tourism, which has resulted in steady economic growth thanks to export markets and caffeine-crazed tourists.

Travelers in Laos who book coffee tours with fair-trade roasters, stay with local families, and grab their lattes from do-good cafes are casting a vote for responsible travel, and they should feel good knowing they are spending their dollars to boost the local economy.

Saffron Coffee in Luang Prabang is a cafe that has partnered with over 800 local coffee farmers from 25 different villages across four provinces to grow and harvest their coffee. Saffron employs locals to run their white-walled, wooden-beamed cafe and pays them a dignified living wage for their work.

Like Saffron, Common Grounds café in Vientiane, has a socially responsible mission. The cafe supports local projects that help women who are “exiting exploitative work environments.”

Even in Paxsong, a city most tourists have never heard of, there exists a philanthropic coffee roaster. Jhai Coffee House, in addition to its coffee business, provides clean drinking water to schools in the Bolevan Plateau.

Aiming for a Greener Business Model

There’s no doubt that coffee has been good to Laos but, like most other countries in Southeast Asia, there is a lot of work to be done to make the industry “greener.” This is particularly true of the delivery of the finished product, which uses a lot of plastic. Typically, street coffee vendors and local corner shops will serve up the beverage after it has been brewed in a massive tin, poured through a strainer, and dumped into a plastic bag of ice that is tied off with a rubber-band and put inside another plastic bag with handles for easy carrying. Straws almost always accompany an iced coffee, though you can ask for it to be left out of your drink if you want to lessen your plastic consumption.

Ultimately, coffee has become an unlikely pathway out of poverty for many Laotians. Not only is it a major export and it has created jobs for locals, but it’s also been particularly positive for ethnic minority farmers in Laos who live away from main cities where most of the economic opportunity exists.

In Laos, the coffee industry is an economical solution to poverty. Along with the steady increase in foreign visitors, coffee has become a lucrative business for local people and an opportunity for sustainable income, something sorely needed in a country where the average person lives off $1.25 a day according to the United Nations Development Programme. The U.N. reports that figure represents a 25 percent increase over the last four years, in part because of the growth of coffee as an industry.