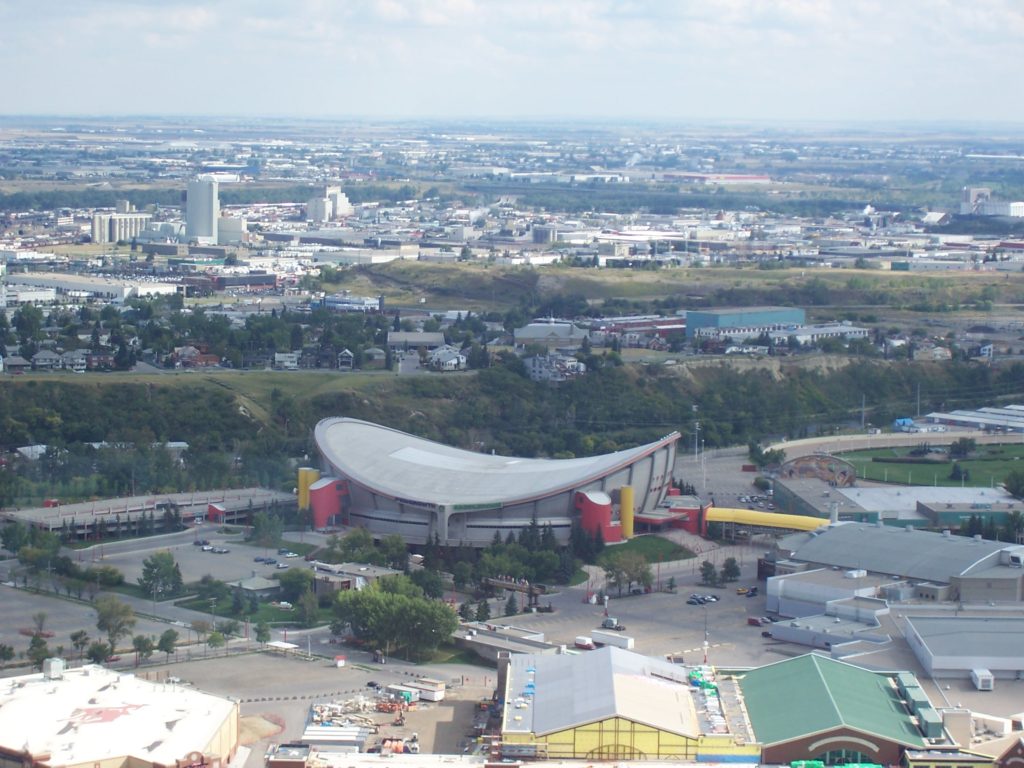 Our final day in Lake Louise, we awoke very early to take in the sunrise over the lake and mountains from our large picture window.  This place is so beautiful that it brings tears to your eyes.  This truly must be what heaven looks like, only we hope it is a bit warmer. :-)If you’re ever looking for a place to get away from it all to think, relax or meditate Lake Louise is the perfect destination.  We ordered in-room dining for breakfast and enjoyed our picture perfect view as we ate.  Just before our coach arrived we took one last look at our beautiful surroundings, signed deeply and, with watery eyes, said good-bye to Lake Louise.

The coach ride to Calgary was only a few hours and we watched the terrain change from mountains to rolling farm land.   The air changed dramatically as we encountered more traffic and the sprawling metropolis of Calgary–home to the Winter 1988 Olympic Games.  As we approached the downtown area we passed an amusement park (people were out riding on roller coasters and such in THIS weather!) and the Olympic Bobsled and Ski Jump structures.  The structures looked abandoned and we wondered whether they are still utilized for training purposes.

Arriving at our hotel, the Fairmont Pallister, we sensed a very different energy in the hotel staff (namely, the person who checked us in from the President’s queue of all places and the person who staffed the concierge desk–very surprising to us) and people around Calgary.  It wasn’t a bad energy but the friendliness we became accustomed to during the previous nine days of our journey was absent.   Nonetheless, after checking in we decided to venture out to see a bit of the city during the few hours that we had available to us here.

We traveled along the sky-walk system in downtown (Calgary plus 15) to the Calgary Tower.  There we took an elevator to the observation tower (approx 626 feet tall) where we stepped immediately onto a glass floor and looked directly down to the street below us.  If you are afraid of heights this would not be a good exercise for you.  We observed several other people trying to summon up the courage to step out into “space”.  We walked around the observation tower and after completing the circle we decided to walk down the stairs to the revolving restaurant below.  To our disappointment the restaurant was under renovation until September 2008.  (Isn’t this September 2008?)

We left the tower and went for a walk-about downtown.  Our initial perception of the City’s energy was validated–Calgary is not very diverse and the residents seem to be barely cordial.  The downtown area seems to roll up its sidewalks during the weekend and the area seems to be populated by homeless people during this time.  Nonetheless we embraced this new experience and wandered into a restaurant called Flames Central/Wild Fire Grill.  The facility is a renovated performing arts center turned sports bar & entertainment venue.  There is a movie screen sized television on the stage and that is surrounded by nearly 32 smaller screens that show other sport features.  We watched the San Diego Chargers game against the Jacksonville Jaguars.  (Disappointing game for our fellow Charger fans!)

The drink and food specials were good but the service was painfully slow despite there being only a handful of guests and several servers.  The service was also questionable as we were given dirty glasses with our drinks.  We probably would not recommend this venue but for its convenient downtown location and the fact that it is only a handful of places downtown that are open on Sunday.

Following the painful loss of the Chargers we returned to our hotel room and decided to order room service.  Our flight is very early and, thus, we will call it an early night.  We wouldn’t necessarily recommend the hotel’s pizza but the staff member that provided our room service and the housekeeping staff member that provided our turn-down service were both very pleasant–they are representative of what we’ve come to expect from the Fairmont family.

Despite the little ‘bump” in Calgary we consider our trip to be very successful.  Calgary, in fact, is the best place we could have finished our adventure because it has helped acclimate us for our return to our urban life in Washington, DC.  We’ve had an absolutely wonderful time in British Columbia and Alberta and we’re looking forward to returning to BC for the 2010 Olympics, if not sooner.  Calgary is a very affluent city but it seems to be used as a gateway for travel throughout other parts of Canada.  Nonetheless we’d love to experience a different side of Calgary and may consider returning for the 2009 Calgary Stampede–the largest rodeo in North America.   Until then, we will continue to re-live our wonderful Canadian memories.

Thank you for Travel’n On with us!  Our next adventure…Knotts Island for the winefest! 🙂