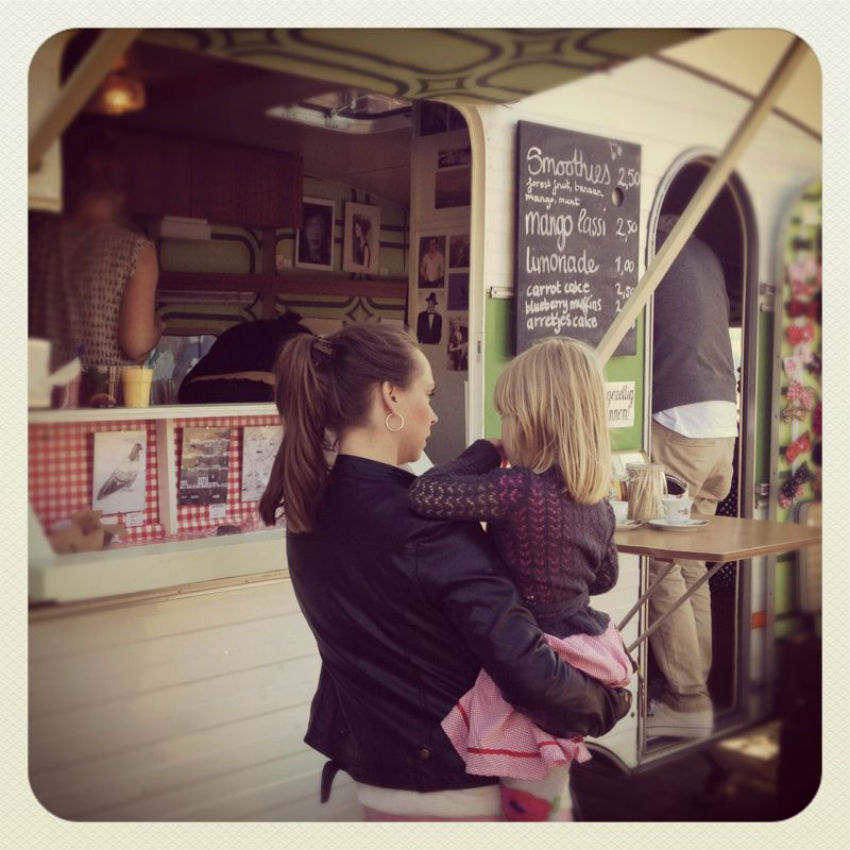 Is the old family RV slowly gathering rust in the backyard? Want to help the world, make people happy and healthy, while at the same time spread the word on using recycled materials to create beautiful new items? That’s what a creative young Dutchwoman named Karlijn has done and it has worked out pretty well for her.  She bought a rusting old Adria caravan off the internet for a measly $100 (a feat easily repeated through sites like tourertrader.co.uk or craigslist.com) and with the help of some handy friends transformed it into a retro-looking, 1960’s mini-artfair and juicebar.

The goal of the ‘De Caravan’ project was to stimulate creative use of second-hand and recycled products. To do this, Karlijn contacted local artists and craftsmen and offered them a place to display their work to a large audience, free of charge. The catch; all products displayed had to be made with second-hand or recycled materials. She then remodelled the trailer to have room for a juicebar and a lounge area and went to festivals and fairs with it. People would get drawn in by the trailer’s retro look and the delicious food, but would stick around for a while looking at the different creative items on display. Often they would go home with some new ideas for old items.

Green was the keyword for everything about the project, it wasn’t a coincidence that it was also the colour of the paintjob given to the trailer. The food and drinks sold from the juicebar were made using mainly home-grown ingredients. If that wasn’t possible then produce was bought from local biological farmers. The products on display in and around the caravan were meant to stimulate people to create them themselves and would usually be made from materials readily available to most people. A great example of this is the plates used to serve the food on. Instead of using plastic or paper single-use plates Karlijn creates her plates and bowls out of old LP records. By heating up the old vinyl she can mould them into plates. People order as many as 4 slices of pie (not really punishment as Karlijn’s pie is delicious) just to get a matching set.  “People often come back to ask how the plates are made” says the young entrepreneur “It’s really easy, all you need is an old record and an oven, anyone can do it. And it’s a great way to use those old LPs you never listen too anyway.”

The project has really taken off as it struck a chord with environmentalist and do-it-yourself advocates around the world. Karlijn has recently branched out into also selling second hand clothing. The profit of the sales will go to buying the trailer a solar-panel, making it even more environmentally friendly. She is currently touring Europe with her caravan.

Robbert Sas is touring the world as a digital nomad. He is a documentary filmmaker and freelance writer with a passion for travelling and finding places off the beaten path. After getting his bachelor’s degrees in film, television and media studies from the University of Utrecht he packed up his bag and started wandering the world.  When he’s not backpacking he’s writing on environmental issues, his own adventures abroad and maintaining a green lifestyle.