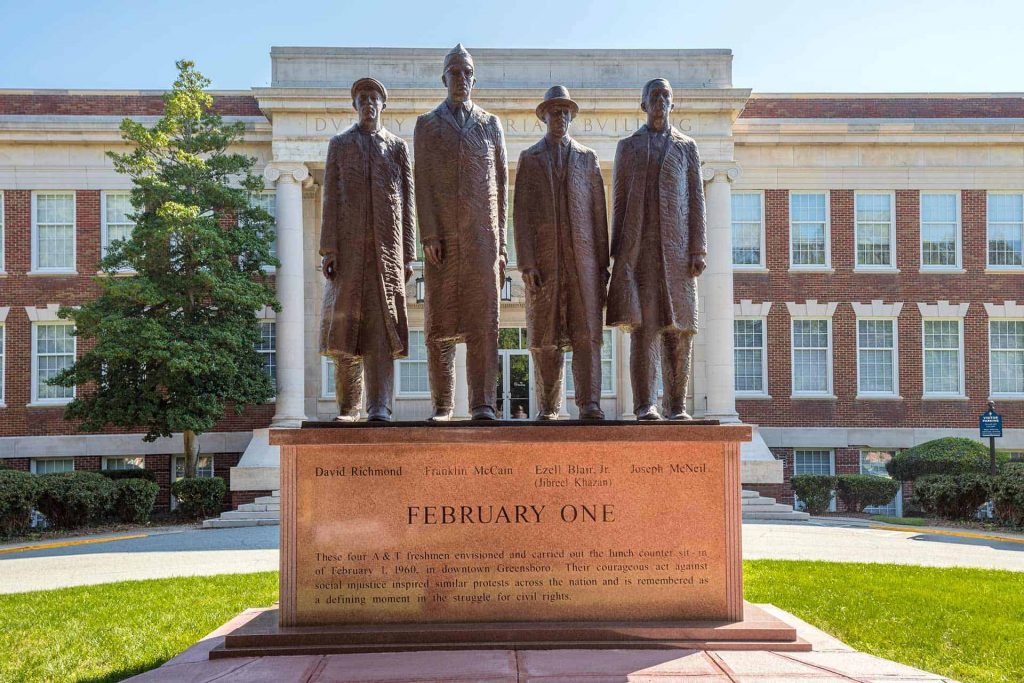 As a Southern-born white woman, incorporating Black history sites into my travel plans never crossed my mind… until I married a Black man. A road trip through Virginia led us to The Freedom House Museum in Alexandria. Once part of the largest domestic slave trading firm Franklin and Armfield, the building now exhibits powerful first-person accounts of enslaved people. Viewing the exhibits in silence, I turned to my husband and saw sadness in his eyes. It was then that I realized, for me, this was a museum filled with accounts of tragic history. For him, it was personal.

During this time of turmoil in the United States—and, hopefully, permanent change—educating ourselves has never been more important. Yes, we learned about history in school, but guess what? There’s more to the story. Admittedly, I’ll never know how it feels to grow up Black in this country, but I can educate myself beyond the classroom.

Increased sensitivity and compassion emerge when we strive to understand each other. Travel provides that opportunity. If you typically travel with children, this assumes even more importance. By introducing them to other cultures during their formative years, we have the opportunity to positively guide the future of the next generation.

“Well, I don’t know what will happen now. We’ve got some difficult days ahead. But it really doesn’t matter with me now because I’ve been to the mountaintop…”

While I love traveling to foreign destinations and experiencing new cultures, the truth is, I can do that right here at home. With 50 states and five territories, the USA has a wealth of cultural experiences to aid in promoting understanding across cultural lines. Here are some unique places and experiences to consider.

As a human being, can you imagine your worth being tied only to such factors as age, gender, health, personal behavior, and skills? This was the plight of enslaved people brought to America against their will. Of course, that “worth” never benefited the enslaved with a paycheck, but rather the slave traders and owners who built their wealth on the backs of captive laborers.

Located on the banks of the Mississippi River, the Whitney Plantation tells the story of its days as an antebellum sugarcane, rice, and indigo plantation through the eyes of those who saw it with brutal honesty—the enslaved. Over the years, Whitney Plantation was home to 350 slaves, and today it exists to educate the public about this dark chapter in American history. Lanyards carrying a card with the story of an enslaved man, woman, or child hang around the neck of each visitor, providing a connection to the story of one person who lived this nightmare. Unlike typical tours where the grand décor of the plantation home takes the spotlight, the Whitney Plantation tours start where the story begins—in the slave cabins.

“Well, I don’t know what will happen now. We’ve got some difficult days ahead. But it really doesn’t matter with me now because I’ve been to the mountaintop…” – Martin Luther King, Jr.

These words delivered by Martin Luther King, Jr. in Memphis from the pulpit of the Mason Temple Church of God in Christ would become part of his final public speech. Hours later, he was fatally shot at the Lorraine Motel. A stop along the Civil Rights Trail, the motel now serves as the National Museum of Civil Rights. Housing 260 artifacts along with 40 interactive stations with films and accounts of oral histories, the museum’s exhibits cover a span of five centuries including slavery, student sit-ins, the Montgomery Bus Boycott, Freedom Rides, and Black Power.

When four Black students from the Agricultural & Technical College of North Carolina (now known as North Carolina A&T State University) stepped into the local Woolworth’s in Greensboro, North Carolina, change began. It was February 1, 1960, when the young men took a seat at the whites-only lunch counter. Despite being refused service, they stayed until closing. And they came back the next day… and the next… and the next until the sit-in drew more than 300 students. Their action galvanized a movement as other sit-ins spread across the country in solidarity.

Today, the original Woolworth’s building houses the International Civil Rights Center and Museum. The historic lunch counter and seats remain intact alongside extensive exhibits that delve into the struggles and successes of the civil rights movement and the Jim Crow era.

In an oral history account by Robert Tyrone Patterson, Sr. who joined his four friends at Woolworth’s on day two of the sit-in, he shares his experience as well as some of his fears. One concern was his parents. What would they think of his involvement? When he sat down to speak with them, his father said, “Son, if my generation had done what they should have done, you wouldn’t have to be doing this.”

History brings us far more than tragic stories fueled by racism, hatred, and greed. It sometimes brings us music and in the case of Motown, it brings us together. The words of Berry Gordy, the founder of Motown tell the story: “Motown was about music for all people – white and Black, blue and green, cops and the robbers. I was reluctant to have our music alienate anyone.”

After receiving the paltry sum of $3.59 as a royalty check for his songs, Gordy’s friend, Smokey Robinson, suggested he might as well go into business for himself. Gordy took his suggestion, borrowed $800, and founded Motown Records Company in 1959—the first African American-owned records company in the country. Soon afterward hits like Please Mr. Postman and Money (That’s What I Want) rose to the top of the charts. Legendary artists including Marvin Gaye, Stevie Wonder, the Supremes, Martha & The Vandellas, the Jackson 5 and Smokey Robinson all worked under the Motown label.

Motown began in Gordy’s small Detroit home, which now serves as the Motown museum, Hitsville. Guided tours share the story of the growth of an empire amid a racially charged environment where top performers were required to enter hotels through the back door. The tours also allow us to celebrate the music of Motown as we attempt to sing along to the famous tunes. If you’re lucky—like we were—you might run into Martha Wells of Martha & The Vandellas. She often stops in to join the tours and when that happens, Dancing in the Street takes on an entirely new level of excitement.

It’s All About Exposure

As Mark Twain said, “Travel is fatal to prejudice, bigotry, and narrow-mindedness, and many of our people need it sorely on these accounts.”

With the Black Lives Matter movement at the forefront, delving into the history and celebrating the cultural contributions of our fellow citizens has never been more important. So, while you’re road tripping around the country this year, consider incorporating some of these or other educational experiences into your itinerary… and bring the kids.