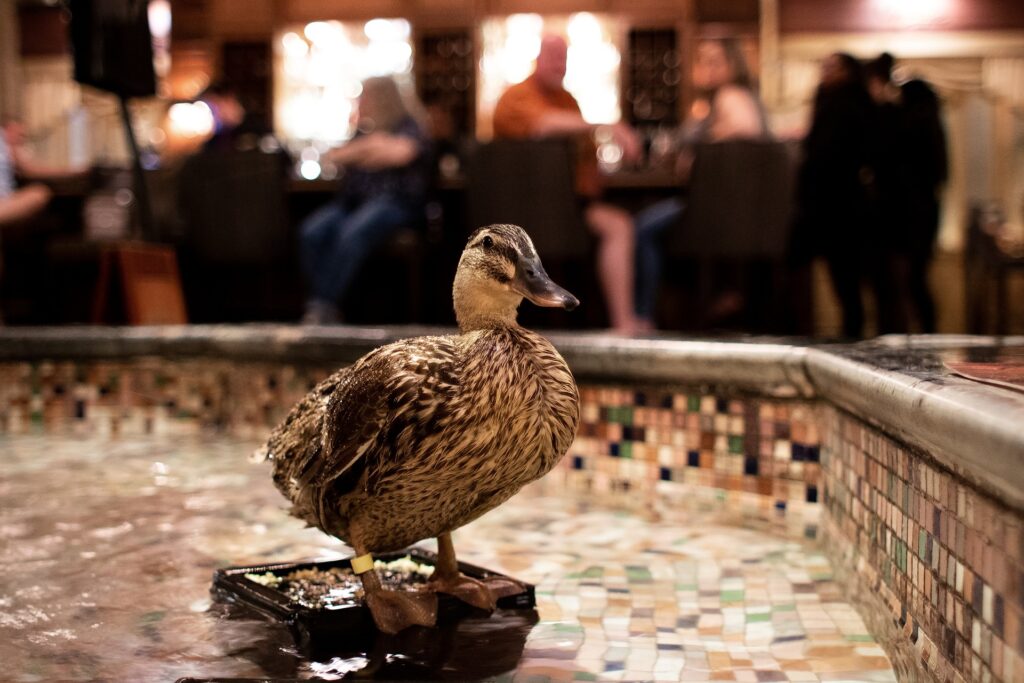 Kenon Walker considered several career paths in his youth. Doctor and lawyer were on the list of possibilities. Duckmaster was not. Yet, if you pop into The Peabody Hotel in Memphis, Tennessee at 11:00 AM or 5:00 PM, you’ll find Walker — and his ducks.

In the morning, he marches the five mallards from the Royal Duck Palace located on the hotel rooftop to an elevator reserved for the waddling superstars. When the elevator door opens in the grand hotel lobby, the feathered entourage crosses a red carpet that leads to the hotel’s fountain. Then it’s up a few carpeted stairs and into the water where the ducks swim and play until 5:00 PM when the duck march happens in reverse.

As the Duckmaster, Walker talks to his team keeping them on task — or attempting to at least. “When I’m training a rookie team of ducks, there’s no rehearsal,” he says. “The first time they march across the lobby it’s in front of a live audience.” Sometimes that means trouble. “On one team, three of the ducks waddled into the gift shop!” He’s also had ducks head straight for the bar.

How it All Began

The bar actually played a pivotal role in the famed Peabody Duck March. In 1933, Frank Shutt, General Manager of The Peabody, and a friend, Chip Barwick, returned from a weekend hunting trip to Arkansas. After overindulging in Tennessee sipping whiskey, they thought it would be funny to place some of their live duck decoys in the Peabody fountain. The ducks were still there the next morning to the delight of the hotel guests. That boozed-induced prank evolved into an 89-year tradition.

In 1940, Edward Pembroke, a hotel bellman, volunteered to care for the ducks. Having trained circus animals in his younger years, he taught the ducks to march into the lobby. Pembroke served as Duckmaster for 50 years before retiring. Walker now serves as the seventh Duckmaster and he’s the second African American to hold the position.

The Path to Duckmaster

Born in Memphis, Walker moved to Atlanta where he began acting at 13 years old. Ultimately returning to Memphis, he became a tour guide with A Tour of Possibilities — showcasing contributions made by African Americans on Memphis across business, music, sports, politics, education and religion. He also created a tour for Stax Museum of American Soul Music.

Eventually, he found his way to The Peabody as a concierge. His Duckmaster predecessor, Doug Weatherford, saw something special in Walker. “We were both historians, so we bonded over our shared interest,” says Walker. But it was more than a shared love of history; Weatherford wanted Walker to be the assistant Duckmaster and he was persistent. “I turned him down three times and he just kept saying, ‘think about it,’” recalls Walker. “But I had just been promoted from lobby concierge to the private club concierge. I had my own private office on the top floor — I had arrived!”

Of course, we all know what happened in 2020 — first the pandemic, then the racial tensions with the deaths of George Floyd and Breonna Taylor. “I joined the peaceful protests in Memphis and marched for four days before realizing that I needed to find a way to make a difference — my own unique path.” It turns out, that path was his role as the Duckmaster.

“With all the stuff that’s going on in the world right now, I realized I get to be the face of joy, the face of hope for people who come to The Peabody to see the ducks,” says Walker. “And, as only the second African American official Duckmaster, I went from teaching history to making history.”

Recently, Walker connected with another African American history maker, civil rights icon James Meredith. The first African American to register at the University of Mississippi in Oxford, Meredith returned to Memphis 55 years after his “March Against Fear” from Memphis to Jackson, Mississippi. On this visit, he marched with the ducks as honorary Duckmaster.

About that Royal Duck Palace

When the ducks aren’t in the fountain, they’re hanging out in a $200,000 Royal Duck Palace made of marble and glass. Inside the palace features a fountain adorned with a pair of bronze ducks. A small replica of the hotel serves as the ducks’ home complete with a grassy front yard.

Each team of ducks stays with the hotel for three months. A new team of rookies overlaps with the veteran ducks for about two weeks giving the Duckmaster time to train the newbies. The ducks come to the hotel from a family farm when they’re one year old. Their underwings are clipped but once the ducks have completed their tenure at The Peabody, they go back to the farm. When their underwings grow back, the ducks are released into the wild to a life of freedom.

Although Walker thought he’d reached the top when he accepted the position as private club concierge on the top floor of the hotel, he now realizes that wasn’t the top at all. “The Royal Duck Palace is on the roof — now, I truly have reached the top!”