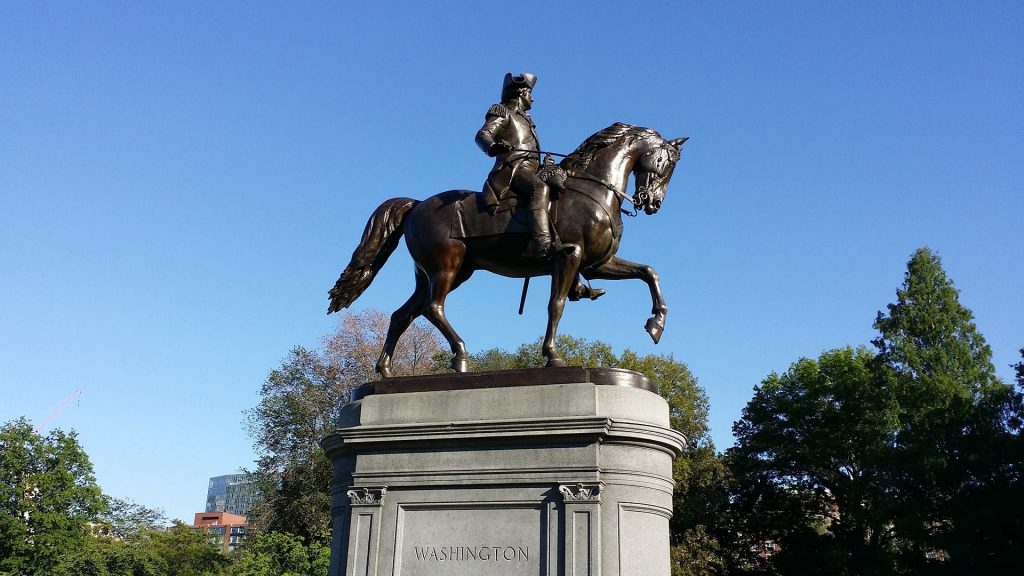 Benjamin Franklin gestured dramatically toward the moldering gravestone of the Revolutionary War soldier. “And then,” he proclaimed, pausing for effect, “He killed ‘im dead!”. Twelve adults and a handful of children stared at him wide-eyed as he finished the dramatic account of the Yankee soldier’s death. “Follow me, I will take you to Old North Church and the site of the Boston Massacre.” He whipped Paul Revere’s woodcutting of the Boston Massacre out of a pocket and displayed it with a flourish. A camera flashed. Benjamin Franklin posed for a second photo.

Obviously, our downtown Boston tour guide was not actually Benjamin Franklin. To be honest, he wasn’t even pretending to be—although I thought the tour company was missing out by not taking advantage of the fact that this man was the spitting image of the famous figure. Eleven-year-old me soaked in every aspect of the spooky graveyard tour, trying to pretend I was fending off the October chill with a deerskin coat rather than a windbreaker and imagining what life might have been like long before Boston became characterized by skyscrapers of chrome and glass. Even after a decade and a half, the memory of this adventure in Boston is clear in my mind.

Boston was the first stop on our family’s history tour of the East Coast, our annual family “field trip.” Instead of the summer vacations to the beach, we took autumn trips to historical or geological sites around the United States. One thing my sister and I loved about the trips is that they counted as school days. This was one of the many perks of being homeschooled, although it didn’t mean we got to skip out on finishing our math workbooks! Just because the trips were considered “school” didn’t mean they were boring. My mom, a teacher, and my dad, a geology aficionado, built up our expectations of the trip through a semester of historical fiction, vivid storytelling, period-accurate toys, movie nights, and projects both recreational and educational. By the time we arrived on the East Coast from Arizona, we felt like we were old friends with George Washington and Paul Revere. We were excited to see everything, and the opportunity to spend money we earned by memorizing geography facts certainly didn’t dampen our enthusiasm.

There are many benefits to taking an educational East Coast vacation. First, it’s fun! Both my sister and I were voracious readers, and my love of history mixed with her interest in photography set the stage for fun on our East Coast road trip. However, touring the history of the East Coast can be a blast even if you or your kids aren’t particularly enamored with books or dusty artifacts. Creepy graveyard tours will excite Ghostbusters wannabes, art lovers will revel in the many museums, foodies will find Heaven on Earth in fine New England eateries, movie buffs will enjoy the many film settings, and the mischievous among us will get a kick out of trying to make Plimoth Plantation actors break character. There’s so much to see and do!

Secondly, of course, a tour of the United States’ roots provides a rich educational opportunity. Experience this region’s history, government, art, geography, marine life, architecture, music and more in real life, and you’ll never see them the same way again. Take your kids on a trip like this, and they’ll have to try to fail social studies tests in the future. There’s just nothing like reading original documents or seeing historical sites in person.

Points of Interest on an East Coast History Tour

When touring the East Coast, why not start where the Revolutionary War began? Boston is not only the birthplace of the American Revolution, but it’s also a great northerly point to start at so you can work your way south. You can see pretty much all of Boston’s history if you take the Freedom Trail. Squint your eyes a bit, and you can almost block out the rush of traffic to imagine 18th Century crowds moving through the cobbled streets. The urban path leads past nearly twenty historic sites, including Boston Common, Granary Burying Ground, old North Church, and the USS Constitution. Don’t forget to see where the Boston Tea Party took place at Boston Harbor. If you want to enjoy some scientific excursions, the MIT Museum and Boston Aquarium are rather impressive. Of course, you can’t leave Massachusetts without a visit to the settlers and Natives at Plimoth Plantation.

Heading south from Boston, you can stop in Fort Griswold Battlefield State Park in Connecticut on your way to New York City. Once in NYC, you’ll have to pick your favorite attractions! I recommend bypassing the Statue of Liberty to tour Ellis Island, although if you’re short on time, you can view both from a distance by taking the Statin Island Ferry across the harbor. If your heart is set on seeing a Broadway play while you’re in Manhattan, you can keep with your historic theme by getting tickets to Hamilton. Of course, you can’t miss the chance to get a glimpse of the Chrysler Building, the Flatiron Building, or the Brooklyn Bridge, but don’t forget to have some fun on the century-old Coney Island Cyclone roller coaster.

Emerge from the lightning-speed pace of New York City life into the antique air of historic Philadelphia. Thanks to National Treasure, you might already be pretty familiar with the major attractions: The Liberty Bell, Washington Square, Old City Hall, and Independence Hall. Depending on your interests, you might also like Battleship New Jersey or Morris Arboretum.

Delaware, as the nation’s first state, certainly deserves a quick visit, which can be achieved with a visit to Fort Delaware. From there, head to Washington, D.C., where you’ll wish you had more time to explore, no matter how long you stay. Where do you even begin? Well, the National Mall is a good place to start. You can burn a lot of calories walking from the White House to the Lincoln Memorial, the Jefferson Memorial, the Capitol, and the various Smithsonian Museums. You might not have time for all the Smithsonian Museums, but you can pick your favorites. I was a fan of the Air and Space Museum and the National Portrait Gallery. After all that walking, you can try to spot senators while refueling at some of the fancier restaurants, like 1789, a popular institution named for the year the Constitution was adopted and offering an 18th-Century experience. If you can plan ahead, book a tour of the White House or your representative’s office. Finally, end your road trip with a jaunt down to George Washington’s estate, Mount Vernon in Virginia.

When you walk the streets of the historic East Coast, the past comes alive! Next time you open an American history book or watch a documentary, you’ll be able to say that you were there. From the centuries-old brick of Boston to the sprawling countryside of Virginia, there’s no better way to learn about the roots of American culture.