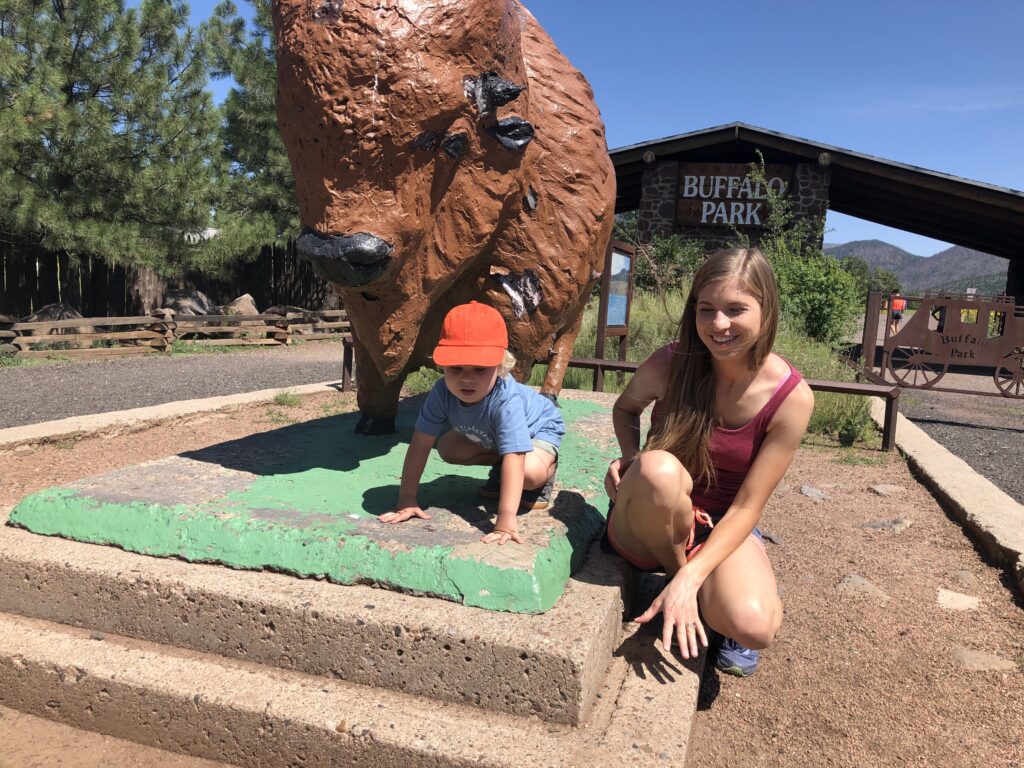 It’s a sunny summer morning at Buffalo Park in Flagstaff, Arizona. The San Francisco Peaks, Arizona’s top ski destination, rises into the sky to the north, the tip of Mount Humphreys sharp against the clear blue expanse. I take a deep breath, pulling the clean, pine-scented air into my city-girl lungs. I’m lucky to have visited Flagstaff following heavy monsoons. Sunflowers, some taller than me, line the dirt paths of the park and sprinkle the meadows with gold.

Although Flagstaff has changed a lot since I moved away at age six, and even more since my parents arrived in the 1970s, this beautiful spot is one place that has endured for generations. As locals and frequent visitors alike can tell you, Buffalo Park is one of the city’s crown jewels, a place filled with historical, ecological, and entertainment value.

Buffalo Park fills my childhood memories. Clearest in my mind is an image of wading with my cousins in a pond where tadpoles wriggle away from bare feet, holding a snake in each hand. This was the place where I learned not only which snakes to touch and which to leave alone, but also animal lifecycles, the slow turn of the seasons, the change of the landscape based on rainfall.

I’m not the only one who made sense of the natural world within the log fence of Buffalo Park. A natural arboretum, the park contains 163 acres of pine forests, meadows, and seasonal wetlands. The park is filled with wildlife, from scampering to crawling to flying creatures. You may even get a glimpse of deer shyly emerging from the tree line. Even as the community of Flagstaff continues to grow and expand, the park is a haven for wildlife within the city limits.

While Buffalo Park has always been a sanctuary for nature, that was not originally its main purpose. James Potter, who went by the name Buffalo Jim, founded the park as a tourist attraction in 1963. This was in the middle of the heyday of Route 66—and the famous road-tripping highway runs right through Flagstaff. To snag these tourists before they departed for Grand Canyon adventures, a mish-mash old west amusement park was created.

Upon arrival, tourists drove past a humongous bison statue created by a local student and though the gates of what appeared to be a log fortress into the park. Alongside real displays of the region’s culture—like weaving exhibitions by Native American artists—were kitschy attractions characteristic of midcentury roadside stops. Visitors could take a “wild west” stagecoach on a loop around the park and visit an old trapper’s cabin. A manmade lake tempted guests to linger a little longer, watching the waterfowl. Wandering the mesa were animals from the region, such as deer and elk, as well as things that certainly never would have found their own way into Arizona, including the European mouflon rams and the Egyptian geese. And the biggest draw to the park, of course: eight buffalo.

Unfortunately for the amusement park, there’s a reason why buffalo don’t live in the middle of cities, no matter how idyllic the natural surroundings. Heavy snow caused damage to the park’s fence, and soon locals began to spot buffalo wandering through the streets and trampling their gardens.

By the end of the decade, the amusement park had closed for good.

If you visit Buffalo Park in Flagstaff today, you’ll still be able to say hello to the massive buffalo statue at the park entrance. You’ll still pass a gate with a stagecoach on it, and enter through a huge log fortress.

But instead of horse-drawn stagecoaches rumbling around the park, you’ll see runners, bikers, and dog-walkers going around the loop. Try a lap yourself, and you’ll find that a whole outdoor exercise circuit is available along the path. You won’t see the buffalo or the rams these days, but you just might see a soft-eyed doe with her fawns in the pines. Near the entrance to the park, you may notice a ring-shaped depression barely visible in the scrub—what’s left of the lake after 70 years of disuse became the springtime pond where I once caught tadpoles.

Join the picnicking families along the trail. Spread a blanket and watch the park-goers: people of all ages and backgrounds, from Flagstaff, and from around the world. You’ll spot senior picture sessions in the sunflowers all summer, wedding parties taking photos against the colorful backdrop of the mountains in the fall. Committed joggers puff white plumes of breath as they endure the cold trails in the winter, and children climb trees in the spring. If you have time, why not register for one of the park’s many cross-country races, or enjoy Flagstaff’s famous dark sky during a stargazing session? Maybe you’ll just pass through as you trek along the extensive walking trail system that runs through the city.

The buffalo that once enthralled tourists are gone from Buffalo Park. Wildflowers, meadow, and forest have reclaimed the world inside the walls, drawing visitors from the stress of civilization to a natural haven of fresh air and birdsong. Although the Wild West amusement park was short-lived, Buffalo Park became something the founders could never have imagined—an enduring legacy of community and conservation.

Historic Tales of Flagstaff by Kevin Schindler and Michael Kitt

2 thoughts on “Experience the Beauty of Buffalo Park, Arizona”