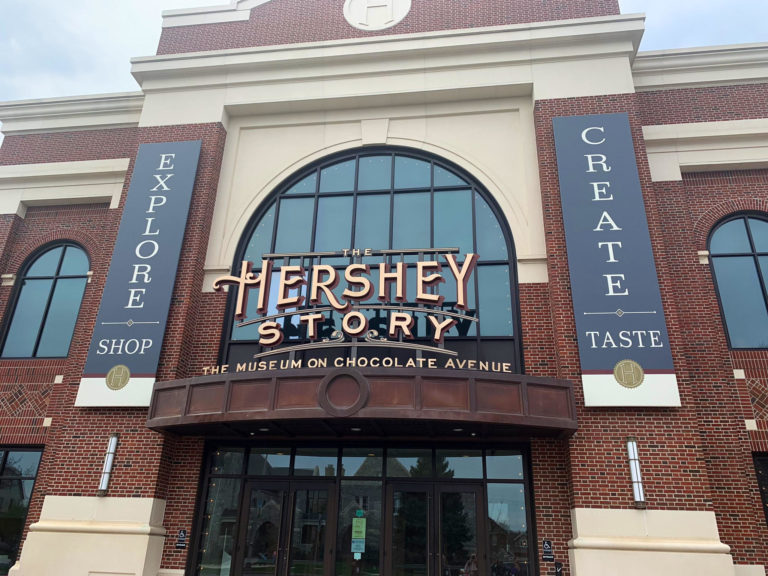 As Valentine’s Day approaches, love, romance and chocolate step into the spotlight. This love and chocolate thing dates back more than 1,500 years to the Maya and Aztec cultures. Believing the cocoa bean was an aphrodisiac, the Aztec ruler, Montezuma, allegedly drank several cups of a strong and dark chocolate drink known as “xocoatl” before visiting his harem to give him stamina. Maybe that’s not really love (or romance) but you get the point.

Traveling for the Love of Chocolate

No matter your current love life status, chocolate should be part of your day on February 14th—and really any day of the year, in my opinion. If you’re willing to travel for the love of chocolate like I am, there’s one place you need to add to your list—Hershey, Pennsylvania. Here, an unmistakable chocolate aroma permeates the air. Streetlamps topped with giant Hershey’s kisses line the charming downtown streets. The Hershey Story Museum shares the history of this beloved treat. Perched above it all is the grand Hotel Hershey where chocolate reigns supreme.

At check-in, you’re handed the key to your luxurious room and a chocolate bar. Inside your room, Hershey’s Kisses adorn your bed. Check your desk and entertainment center and you’ll discover more chocolate treats. Just to keep you in check, the bathroom comes with a scale. If facing the reality of your overindulgence concerns you, ask the bellman to remove it. Problem solved!

Perhaps the greatest luxury of all, The Spa at Hotel Hershey (affectionately known as the Chocolate Spa) renders a truly indulgent experience. In honor of the property’s rich history, the spa menu features a variety of chocolate services. Start your retreat with a Whipped Cocoa Bath, cocoon yourself in a Chocolate Fondue Wrap, relieve tired muscles with a Cocoa Massage. You’ll emerge rejuvenated and smelling so cocoa-delicious you’ll be tempted to nibble on your arm.

The Man Behind the Chocolate

Like many of you, I grew up loving Hershey’s chocolate. But it wasn’t until my first visit to this candy kingdom that I discovered the love behind the chocolate. Raised in the Mennonite faith and with only a 4th-grade education, Milton Hershey embarked on a journey fraught with failures. After completing a four-year apprenticeship with a Lancaster candy maker, he started his first candy-making business in Philadelphia. His first efforts failed as did subsequent attempts in Chicago and New York.

In 1883, he returned to Lancaster and established his first successful company, the Lancaster Caramel Company. At the 1893 World’s Columbian Exposition he became fascinated with German chocolate-making machinery and returned to Lancaster determined to purchase this equipment for his company. After numerous bankruptcies, he convinced an aunt to mortgage her home to secure financing. Soon afterward he began producing several varieties of chocolate in his new chocolate factory in the township of Derry—now known as Hershey.

The Love Behind the Chocolate

Milton Hershey’s success didn’t come easily, but he never waivered in his determination. He also held steadfast in his commitment to the community where he grew up. A tour with Hershey Trolley Works reveals more of his story while showcasing important sites in his life including his birthplace, the homes he built for his executives and the Milton Hershey School which was founded in 1909 by Hershey and his beloved wife, Kitty. Upon learning they could not have children of their own, the couple established the school to provide education for orphaned boys. Today the school has approximately 1,700 students comprised of boys and girls from underprivileged homes.

Many former students have returned to Hershey later in life to serve as executives with various Hershey corporations. Since his death in 1945 at age 88, Hershey’s legacy continues to thrive. The school and the Hershey philanthropy are maintained through the holdings of the Milton Hershey School Trust, which derives much of its support from the profits of The Hershey Company and Hershey Entertainment & Resorts Company.

Milton Hershey may be best known for his candies, but his love of community extends his legacy far beyond the chocolate. So next time you feel guilty about reaching for that chocolate bar on Valentine’s Day or whenever the urge strikes, remember where the proceeds are going. That should ease the guilt…well, that and the removal of the scale!