Consul Arie Sommer, a veteran of the Israel Government’s Ministry of Tourism, was nominated Tourism Commissioner for North and South America in October 2005.

In his career with the Ministry of Tourism, he has represented Israel as the Director of the Israel Government Tourist Offices in Atlanta, Houston and Los Angeles, and has served as Director of Overseas Offices and Operations at the ministry’s Jerusalem headquarters. Prior to his present appointment he served as the ministry’s Deputy Director of Marketing Administration.

Arie Sommer was responsible for organizing the first-ever convention of Jordanian and Israeli Travel Agents in Israel in December 1994, as well as the late Prime Minister Yitzhak Rabin’s historic Conference on Peace Tourism in September 1995. In the United States he oversaw Israel’s 50th Anniversary and Millennium tourism campaigns, and was responsible for Israel’s recognition of American and Canadian efforts to build tourism to Israel with the creation of the 50th Anniversary Travel and Tourism Awards. In 1999 he was chosen the “Middle East Destination – Person of the Year” by Travel Agent Magazine.

A graduate of the Hebrew University of Jerusalem, Arie Sommer holds a Bachelor of Arts degree in International Relations. He also studied English at Cambridge University, England, and completed a two-year hotel management course at the Tadmor Hotel School in Herzliya, Israel. He was a member of the Israeli delegation at the momentous peace treaty discussions with Jordan in 1994. 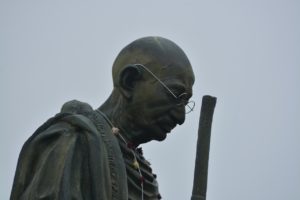 This broadcast is a favorite legacy show that we produced under our old name Travel’n On and before rebranding as WORLD FOOTPRINTS. Rajmohan Gandhi grandson of Mahatma Gandhi will share his views on various topics. Travel’n On listeners will discover the beautiful country of Israel with Arie Sommer, Israel Tourism … Read more