In his years at Cafe’ Giovanni, Owner and Chef Duke LoCicero has been bringing worldwide attention to New Orleans Cuisine.

Born and raised in New Orleans, “Chef Duke” has been a part of the restaurant scene since he was thirteen. At eighteen he enrolled in the Culinary Institute of America in Hyde Park, New York. After his apprenticeship he worked throughout the United States, gaining experience with a variety of cuisine’s that have undoubtedly influenced the blend of flavors that characterize Chef Duke’s creations at Cafe’ Giovanni.

LoCicero is known for his passion for New Orleans food and for his showmanship in the kitchen and dining room. For 26 years, he operated his own Café Giovanni in the French Quarter, at 117 Decatur St. It was part of a generation of restaurants that introduced a new style to the Creole-Italian table. LoCicero called his cooking “New World Italian cuisine,” an approach defined by Southern Italian classics with a hearty dose of Louisiana flavor.

The Sea Ketch in New Jersey, The Brownstone in Houston, Joey’s in Baton Rouge, and the Royal Orleans were just a few of his ports of call. Chef Duke LoCicero creates “New World Italian Cuisine” which he presents in a unique artistic style. Chef Duke has won numerous awards including Louisiana Restaurant Association’s 2004 Restaurateur of the Year, and the prestigious Taster’s Choice Award for Best Chef in 2002.  Click Here for Duke’s Resturant 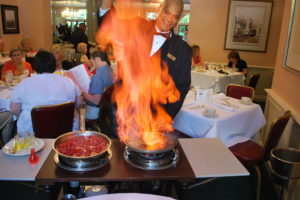 In our first hour of the 2012 French Quarter Festival broadcast we will celebrate our 5th anniversary of LIVE broadcasts from New Orleans by sharing sound bites from the previous years. You’ll recognize prior guests and the comedy relief they offered on past shows; guests like Rockin’ Dopsie Jr. and … Read more