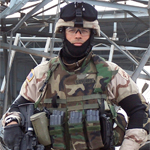 As a combat veteran, Christopher Loverro provides a unique perspective as a writer, director, and actor when it comes to telling stories about the modern warrior. He served as an Army Reserve Staff Sergeant attached to the Army’s first Stryker Brigade Combat Team. During his time in Iraq he participated in a plethora of missions along the full spectrum of warfare. In addition to their war-fighting mission, his Combat Brigade conducted numerous humanitarian operations to include providing relief supplies for over 2,000 refugees. Because of his civilian background as a police SWAT team operator, SSG Loverro helped with some of the training for the Iraqi police and designed and implemented the Defensive Tactics Training program for the basic training battalion in Mosul where he helped train 600 new Iraqi Army recruits.

Christopher Loverro has a Bachelor’s degree from UC Berkeley in Peace and Conflict Studies and has studied at the European Peace University’s campuses in Austria and Spain and did an internship in conflict resolution at the University of Bradford’s Peace Studies Department in Bradford, England. Due to injuries sustained in the line of duty, he retired from the Berkeley Police Department in 2008. Wanting to make films to honor veterans and their families, he studied at the Berkeley Digital Film Institute where he graduated in 2010. It is here where he discovered that writing, directing, and acting can be a great form of catharsis for veterans. Christopher Loverro grew up in Oakland, CA, where he currently lives with his Rottweiler, Gaia. He is using the Post-9/11 GI Bill to study acting and is working on developing scripts for additional films that examine the experience of coming home from war and how veterans re-integrate back into civilian life. Christopher also works to support The California Veterans Support Foundation (CVSF). Created to provide a link to programs and services not offered as a direct result of the operation of the California Veterans Home in Yountville, CVSF connects local veterans with the larger community of Napa County by directing and offering support for wellness and social benefit opportunities outside traditional VA programs.