David Gordon is a broadcaster and writer based in Northern Ireland. He has been involved in the travel media for around ten years. He has a strong interest in Scots-Irish issues and reguarly travels between Scotland and Ireland on research trips. Further afield, he has also visited regions of France, Italy, Malta, Spain, Austria and Poland as well as Niagara Falls, Gettysburg and Washington DC. Outside of travel, he is also a voiceover artist for commercials and radio station jingles.

David Gordon has been involved in the media industry for over 30 years. His deep, rich, neutral Northern Irish tones are in high demand for IVR, Commercials and Station Imaging. He has been the voice of the Irish Post Country Music Awards, Irish Post Awards and Irish Post Music Awards shows broadcast on TG4 for a number of years and has been station voice for Northern Ireland’s Downtown Radio & Downtown Country. David is also the friendly, welcoming IVR phone voice of over 700 businesses and government departments in the UK and across Ireland. He has worked on Movie & TV ADR projects for A Belfast Story, Divorcing Jack and Eureka Street. David also regularly records “explainer videos”, recent clients include Simply Telecom, Independent Estate Agency, Police Service of Northern Ireland and the Department for Communities. 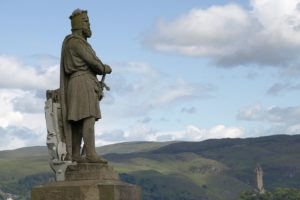 This broadcast is a favorite legacy show that we produced under our old name Travel’n On and before re-branding as WORLD FOOTPRINTS. David Gordon joins us from Ireland to talk about “Homecoming Scotland”, a festival that celebrates people from around the world who have Scot-Irish heritage. Scotland returns 2009 is … Read more