Holly Austin Smith is a survivor of child sex trafficking and an advocate against all forms of human trafficking.  In order to raise awareness about human trafficking, Holly has appeared on the Dr. Oz show and has been featured in Cosmopolitan magazine.  Holly is requested on a regular basis to provide testimony and input to law enforcement officials, social service providers, human trafficking task forces, legislators, educators, and journalists.

Holly Austin Smith was the keynote speaker for the 2012 Trafficking in Persons Symposium in Salt Lake City, UT, an event hosted by the United States Department of Justice.  Holly works with survivors and anti-human trafficking organizations across the country.  When she isn’t speaking, Holly is working on an academic book about trafficking, which is under contract with Palgrave-Macmillan and slated for publication in late 2013 or early 2014.  Holly earned a Bachelor’s Degree in Biology with a Minor in Writing from the Richard Stockton College of New Jersey.  She currently lives in Richmond, VA with her husband, Ben, and their Miniature Schnauzer, Tonka.  A recently-released film titled Finding Faith portrays portions of Holly’s story. Holly invites you to join her on Facebook or Twitter and to follow her personal blog. 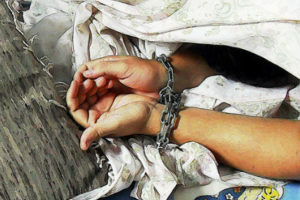 World Footprints will present two powerful stories of survival from unlikely human trafficking victims and how they’re using their ordeals to support other victims and raise awareness about this elusive crime.  We will also share the story of a former Peace Corp volunteer whose experience inspired the development of a … Read more