Leslie Riley‘s done just a little bit of everything. Her non-linear path has given her opportunities to travel the world, study human dynamics, and live life to the fullest every minute. She calls herself a “Life Enthusiast” because if there’s some kind of challenge most people don’t want to tackle…she’ll give it a try. From running an ultra-marathon to taking lessons to master the flying trapeeze, Leslie doesn’t know the meaning of the words, “I can’t.”

Leslie decided early on to take the road less traveled, which led her to The U.S. Military Academy at West Point after high school. Leslie spent four years there pursuing a degree in Portuguese (including a summer program in Brazil, which hooked her irrevocably on international travel) before being commissioned as a second lieutenant in the Army. She spent seven years as an Aviation officer flying CH-47D Chinook helicopters, including tours in Kosovo & South Korea.

After leaving the Army, Leslie Riley worked in a lot of organizations & roles from sales to project management.  Some of her most unique (and favorite) jobs were as a professional organizer & TV news producer.  Eventually she found her way into a role as an internal facilitator where she spent several years working & playing in a field she knew was meant for her!   She also added the titles “trainer,” “inspirational speaker,” & “coach” to her resume before starting her own company, Full Circle Inspiration, which focuses on inspiring groups & individuals to look for new perspectives when the ones they’re stuck in just aren’t working anymore. Her passion is bringing innovation to teams in order to help them use their own brilliance to improve communication and enhance success.

In her spare time Leslie does yoga, jogs, whips up masterpieces in her kitchen, and creates adventures everywhere she goes!  She is also an avid penny picker-upper (or any found money, really!), starting The Penny Project as a way to pool found money & small donations for a bigger cause. With hundreds of people out there finding pennies with her, she’s been able to collect over $4,700!  She’s donated the money to inspiring individuals, local community buliding organizations, & national charities during times of need.  On top of all that, she compiled all the great lessons she learned from the experience in Penny Perspectives: Let Go of Happily Ever After & Invest in Happily Ever NOW!  She even cajoled her cat into posing with her in a stovepipe hat for the back cover of the book!  And you probably thought pennies weren’t all that interesting or valuable, eh?! 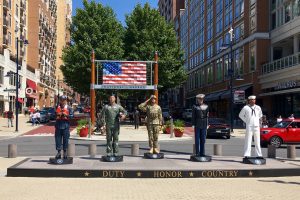 Salute to Patriotism and Statesmanship

Join us for conversations with two of America’s finest as we thank them for their service and learn whether deployment overseas changed how they travel the world today.