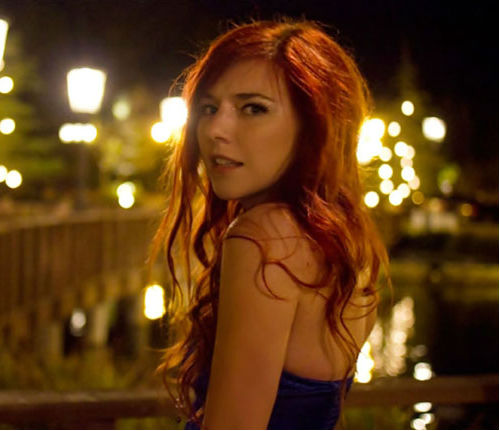 Marina Verenikina – Born in Soviet Russia to a Communist nuclear physicist father and a child psychologist mother, Marina grew up in Moscow singing and making up her own melodies before she could talk. Marina’s grandma started teaching Marina piano when she was only 4. Noticing her daughter’s musical talents, Marina’s mom insisted that Marina receive her music education. So, Marina went to a school of music each day right after her regular school. “The school of music was very rigid. I resisted it for a long time – like a normal kid, I just wanted to go play with other kids after school, and not go to the school of music every night” – Marina says about her 8 year experience at the school of music. When she was about ten, Marina decided to play a song of her own for her piano teacher, who scolded Marina saying that it was “simply nonsense”. Too young to understand why, Marina didn’t realize that the Soviet culture was not the perfect environment for an aspiring young artist with big dreams. She took her teacher’s negative comments to heart and put her songwriting on hold. She turned to reading, skateboarding, torn jeans, karate and swimming, went figure skating in winter and often skipped her music classes. Then Marina discovered the Beatles. The Beatles invaded Marina’s mind and she spent hours playing their songs on the piano, figuring out the lyrics word by word and even more hours trying to find more Beatles tapes (which was quite difficult as American & European music had just started to appear on the Russian markets). Marina did try to write a few more songs but was too self conscious to keep them.

Everything changed when Marina turned 15. She entered a national competition for a scholarship (FLEX – Future Leaders Exchange Program) to study in the U.S.A. for a year and won, beating hundreds of thousands of Russian peers. “I can’t quite explain it, but I feel like I bloomed during that year in America. American culture has this relaxed yet ‘go for it’ positive attitude, which I think allowed me to just be myself. I fell in love with American positivity”. That was when Marina knew she would move to America, no matter the obstacles. Marina had to return to Moscow at 16 only to find out her mom was moving to Australia and that her year of study abroad wouldn’t count academically in Russia. To finance her trip back to the USA Marina took a job at a beverage franchise as a secretary and saved up her money while helping support her family and studying hard to finish high school. “It was a tumultuous and a very strange time in Russia – in late 1990s – for example: I was making more money at Cadbury-Schweppes than my father, who has a degree in nuclear physics and who was working for the government!!”

At 17, Marina Verenikina finally found a way back to America, but life was far from easy. “I had a lot on my mind. I felt very guilty about leaving my family and my country, I was very lonely and scared trying to adapt to the new way of life. I was living with an abusive host family, commuting to college and working a few part-time jobs. I’ve had a number of terrible relationships & life-altering experiences of which I am not quite ready to openly talk about. This was when I started to write more than I ever have before. Writing songs became my drug, my therapy and my spiritual healer. It helped me come to terms with and overcome many things. Music saved my life”. Soon Marina met Nick Baker, who heard her songs and inspired her to seriously pursue a career in music. She sold her pickup truck to buy a piano, and sang her songs for hours every day. Neighbors in her apartment building often came to the door to hear her play, which was at first scary but quickly became encouraging. At about the same time Marina entered her college talent competition, sang her original song “Leaving” and won first prize.

After receiving dozens of emails and comments from students saying how much her song moved them, Marina Verenikina went into the studio and recorded her songs. She received so many pre-orders from students & faculty, that she was able to finance the whole recording session and to manufacture the CD (Let Me Dream). Her first show in a little coffeehouse in Jacksonville, IL, was filled to the fire capacity! Marina & Nick started playing shows in Central Illinois & quickly expanded to surrounding states, but not without obstacles. One early CD release concert ended up just an inch away from tragedy, when the ceiling caved in, collapsing on top of the stage just a minute before Marina & the band would start the concert. (full story) As soon as Marina graduated from college, Marina & Nick relocated to Los Angeles. “When I first moved to L.A., I didn’t know ANYBODY. I couldn’t even get a club show because all of the venues expected a certain ‘draw’. I asked one booker if I could open for an act that had a good following in town, and he just laughed at me. Yes, he actually laughed! But he did tell me to start playing any gigs that didn’t require a “draw” to build my fanbase. So I started playing Borders Books & Music & any other gigs I could get, and made fans one person at a time. I ended up playing 125 Borders gigs over a period of a year and a half” After sending hundreds of demos to the music industry, Marina caught attention of David Krebs, a renowned manager from New York, who’s been involved in building the careers of Aerosmith,Trans-Siberian Orchestra and Don McLean, among others.

In January 2008, Marina Verenikina released “Modern Fairytale”, recorded with Nick Baker, Marina’s band & their friend/engineer Jared Brown at the beautiful home studio of legendary musician Graham Nash. “Modern Fairytale” is a beautiful album where elements of reality & dreams co-exist in a wonderful and a creative way. With subjects such as love & loss, peace & war, struggle & success, togetherness & loneliness, intertwined with vivid fairytale images (ghosts, butterfly/guardian angels & such) Marina creates a magical, yet a very real world, full of highs and lows. From the first notes of “Hope”, through the happy beats of “Sunshine Guaranteed” to the longing words in “Babushka”, sung in Marina’s native Russian, the album is a magical collection of songs, through and through. In 2009, “Sunshine Guaranteed” was featured on a popular iPhone game, Tap Tap Revenge2. In early 2010, Marina and Nick completed MY STAR, a beautiful and exquisite new album. Sponsored entirely by Marina’s fans (having raised almost $30,000 from devoted listeners around the world via marinav.com) and produced by the renowned producer, Guy Erez (known for his work with the Gipsy Kings, Ryan Cabrera, Jennifer Love Hewitt, Keaton Simons and many other CBS Records artists).

In Feb 2011, Marina and Nick were flown to London to receive an award from Sir Bob Geldof for their song “You Make Me Beautiful”, which was a Grand Finalist in the international song contest YouBloom. This very same year Marina has written several songs that were featured on NBC‘s famed show, Days of Our Lives, and released an EP, SMALL COLLECTION OF INTERESTING SONGS, with 3 of the songs from Days. In December 2011, yet another one of Marina’s songs aired in an emotional Days Christmas episode, garnering significant attention to Marina’s music from millions of fans around the world. Since 2011, Marina has written several songs for films, ads and TV shows, and has had her music all over the world, including Delta Airlines. Marina has recently become an American Citizen & she now has a dual Russian-American citizenship. She has become a big supporter of the energy independence movement and is riding the clean vehicle wave with her Toyota Prius, whether on tour or at home in Los Angeles. A self-described ambitious workaholic, Marina continues touring, writing & recording while looking for an artist-friendly record label. “I love writing songs and I really love performing them for my audience. I can’t imagine a day without music. I will be doing this forever.” To learn more about Marina and see where she’s performing visit her website www.MarinaV.com. 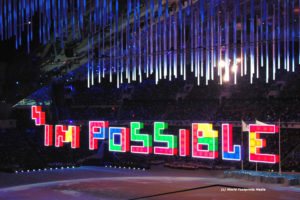 Sochi beyond the Paralympics

The country of Russia celebrated a very successful Olympic and Paralympic Games and we thoroughly enjoyed our time in Sochi.  For us, the Paralympic Games were transformative.  We saw many examples of courage, strength, humanity and the belief that all things are possible, especially in the face of great adversity. For a … Read more