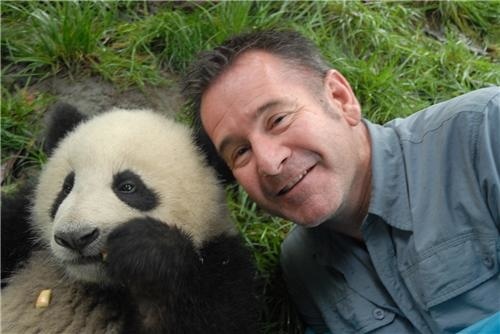 “I never had model cars or train sets when I was a kid,” says TV naturalist Nigel Marven. “My bedroom was full of stick insects and green lizards, baby crickets and boa constrictors.  Oh, and a giant eel in the bath tub.”  Some 40 years later, the boy with bugs in his bedroom has become British televisions busiest wildlife presenter – spending at least 300 days a year away from home. Currently he wears the title International Ambassador to the Pandas at the Chengdu Panda Base in China.  Nigel has swum with sharks and wrestled with alligators. He’s slithered with snakes; crept and crawled with insects. He’s even donated his own blood to mosquitoes, leeches and giant kissing bugs in the interests of science and television entertainment.  Speaking of which, he also mislaid some giant millipedes somewhere in Jay Leno’s studio during the latest of several appearances on the U.S. talk show circuit. “My parents thought I would grow out of it but I never did. I am rubbish at football and tennis but I’m amazingly well coordinated at catching a snake.”  While studying botany and zoology at Bristol University, Nigel got into film making by following a BBC producer – at his own expense – around Devon and Cornwall.  He was then offered his dream job – with one of his great heroes, David Attenborough – as a researcher on THE FIRST EDEN, about the natural history of the Mediterranean. Working in a macro studio, he quickly learned the special grammar of wildlife film-making and was ready to move into production.

Having been privileged to work with Attenborough, Nigel Marven now found a job working with his other great idol and inspiration, Gerald Durrell, as an assistant producer on a BBC series of MY FAMILY AND OTHER ANIMALS.  There followed a ten-year production stint with the BBC’s world-renowned Natural History Unit. Nigel produced and directed more than a dozen shows: SUPERSENSE, ENTER THE DRAGONS, THE SERPENT’S EMBRACE, BARRELS OF CRUDE AND WALLAROOS, REALMS OF THE RUSSIAN BEAR, THE WITNESS WAS A FLY, MAGPIE IN THE DOCK, KING OF KINGFISHERS, ADDICTED TO SWANS, INCREDIBLE JOURNEYS, ROCKETSHIPS, THE NATURE OF IRAN and LIFE OF BIRDS. His biggest hit was as series producer of INCREDIBLE JOURNEYS, which followed the migration of various animals, attracting an average audience of 8 million – and 9.5 million for the show about swallows. At first Nigel had doubts about his own star potential. “I thought I was too shy ever to go in front of the camera – I’d been a producer until now – but I put together a show reel of me wrestling with a monitor lizard and they commissioned a six-part series called GIANTS. Making his screen debut by crawling into an aardvark burrow in search of a giant python, Nigel was an instant hit with his playful but knowledgeable style – and hasn’t looked back since. His shows as producer/presenter for ITV and Discovery include GIANTS, GIANT CREEPY CRAWLIES, BLOODSUCKERS, ALLIGATORS, RATS, BIG CATS, SHARK WEEK and the weekly primetime US show NIGEL’S WILD WILD WORLD, which ran for two years. In 2001 he set up his own production company, Image Impact, making shows such as MEERKATS, ANACONDAS, PIRANHAS (Discovery), BULL SHARKS (Discovery), ANIMAL DETECTIVES (five & WNET), VENOM HUNTERS  (five & WNET), RHINO ADVENTURE and UGLY ANIMALS (five & WNET), PENGUIN SAFARI and POLAR BEAR WEEK Animal Planet & five), INVASION OF THE GIANT PYTHONS (WNET & five), and PANDA WEEK (five).   He has also presented SEAMONSTERS (Discovery/BBC), KING OF THE JUNGLE (Animal Planet), EXTREME ANIMAL ATTACKS (five), BRITAIN’S FINEST NATURAL WONDERS (five), HELP! I’M NO BIGGER THAN A BUG (National Geographic, & ITV1), NIGEL MARVEN‘S SHARK ISLAND and JAGUAR ADVENTURE WITH NIGEL MARVEN (five).  Nigel’s hit show PREHISTORIC PARK is highly successful and is one of his biggest successes. Nigel has a seven-year-old son named Theo, a beautiful two-year-old daughter, Eleonora and wife Gill.  In his spare time Nigel drives a Smart car, enjoys birding and running and has taken part in 11 marathons, most recently in 2008 when he ran the London Marathon on behalf of WDCS, the Whale and Dolphin Conservation Society. 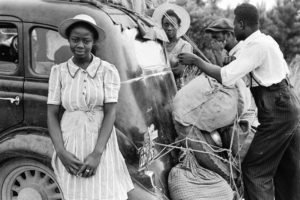