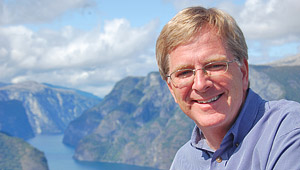 Rick Steves advocates smart, affordable, perspective-broadening travel. As host and writer of the popular public television series Rick Steves’ Europe, and best-selling author of over 50 European travel books, he encourages Americans to travel as “temporary locals.” He helps American travelers connect much more intimately and authentically with Europe — and Europeans — for a fraction of what mainstream tourists pay. Over the past 20 years, Rick has hosted over 100 travel shows for public television, and numerous pledge specials (raising millions of dollars for local stations). His Rick Steves’ Europe TV series is carried by over 300 stations, reaching 95 percent of U.S. markets. Rick has also created two award-winning specials for public television: Rick Steves’ European Christmas and the ground-breaking Rick Steves’ Iran.

Rick Steves writes and co-produces his television programs through his company, Back Door Productions. Rick Steves also hosts a weekly public radio program, Travel with Rick Steves. With a broader approach to travel everywhere, in each hour-long program Rick interviews guest travel expert, followed by listener call-ins. Travel with Rick Steves airs across the country and has spawned a popular podcast. Rick has also created a series of audio walking tour podcasts for museums and neighborhoods in Paris, Rome, Florence, Venice, London and Athens. Rick self-published the first edition of his travel skills book, Europe Through the Back Door (now updated annually), in 1980. He has also written more than 50 other country, city and regional guidebooks, phrase books, and “snapshot” guides.

For several years, Rick Steves’ Italy has been the bestselling international guidebook sold in the U.S. In 2009, Rick tackled a new genre of travel writing with Travel as a Political Act, reflecting on how a life of travel has broadened his own perspectives, and travel can be a significant force for peace and understanding in the world. Rick’s books are published by Avalon Travel, a member of the Perseus Books Group. In addition to his guidebooks, TV and radio work, Rick Steves is a syndicated newspaper columnist with the Tribune Media Services. He appears frequently on television, radio, and online as the leading authority on European travel. Rick took his first trip to Europe in 1969, visiting piano factories with his father, a piano importer. By the time he reached 18, Rick jokes, “I realized I didn’t need my parents to travel!” He began traveling on his own, funding his trips by teaching piano lessons.

In 1976, he started Europe Through the Back Door (ETBD), a business which has grown from a one-man operation to a company with a well-traveled staff of 80 full-time employees. ETBD offers free travel information through its travel center, website (www.ricksteves.com), European Railpass Guide, and free travel newsletters. ETBD also runs a successful European tour program with more than 450 departures — attracting around 11,000 travelers — annually. Rick is outspoken on the need for Americans to fit better into our planet by broadening their perspectives through travel. He is also committed to his own neighborhood. He’s an active member of the Lutheran church (and has hosted the ELCA’s national video productions). He’s a board member of NORML (The National Organization for the Reform of Marijuana Laws). And Rick has provided his local YWCA with a 24-unit apartment building with which to house homeless mothers. Rick Steves spends about a third of every year in Europe, researching guidebooks, filming TV shows, and making new discoveries for travelers. Rick was divorced in March, 2010. He lives and works in his hometown of Edmonds, Washington, where his office window overlooks his old junior high school. 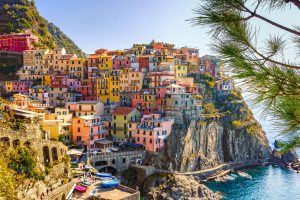 Today on World Footprints, we welcome back, author and television host, Rick Steves. We enjoy a very thought-provoking discussion about a range of topics from the current pandemic and social issues to the challenging issues facing the travel industry today. 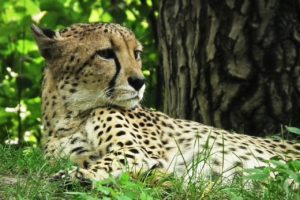 Travel around the globe with World Footprints today as we go to Namibia, the Mediterranean and Detroit. First stop…Namibia with Dr. Laurie Marker, Founder of the Cheetah Conservation Fund.