Rodney J. Uphoff is first Elwood L. Thomas Missouri Endowed Professor of Law at MU, where he also served as the associate dean of academic affairs for three years. In 2006, Uphoff was selected to be the director of the University of Missouri South Africa Educational Program, representing the four University of Missouri System campuses. He also directs the School of Law’s study abroad program in Cape Town, South Africa. Before joining the MU faculty in 2001, Uphoff taught at the University of Oklahoma College of Law, where he served as a professor and director of clinical legal education and ran a criminal defense clinic for 10 years. From 1984 to 1988, he directed a criminal clinic at the University of Wisconsin Law School. Before becoming a law professor, Uphoff was a public defender, including service as the chief staff attorney of the Milwaukee Office of the Wisconsin State Public Defender. He also worked for Gimbel, Reilly, Guerin & Brown in Milwaukee, concentrating in personal injury and products liability litigation. Uphoff has written numerous articles on criminal defense practice, the delivery of indigent defense services and ethical issues facing those involved in the criminal justice system. In 1995, he edited a book for the American Bar Association, Ethical Problems Facing the Criminal Defense Lawyer. In 1995, Uphoff was appointed by Gov. Frank Keating to the Oklahoma Indigent System Board, which oversees the operation of Oklahoma’s public defender program in all counties except for Tulsa and Oklahoma County. In 1998, Uphoff served as a legal specialist in Romania as part of the American Bar Association’s Central and East European Law Initiative (CEELI) Program. In 2009, he was appointed the Big 12 representative to the NCAA Infractions Committee. Uphoff frequently speaks at conferences across the country on criminal trial advocacy and has participated five times as a faculty member at Harvard University’s Trial Advocacy Workshop. Uphoff was one of four attorneys appointed to represent Terry Nichols in Oklahoma state court. Nichols was convicted of 160 murders based on the bombing of the Murrah Building in Oklahoma City in April 1995, but did not receive the death penalty. Uphoff teaches trial practice, professional responsibility, criminal procedure and criminal litigation skills. 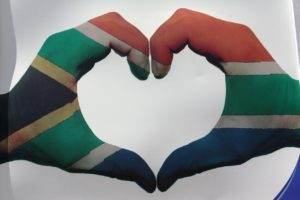 As the world remembers Nelson Mandela on the anniversary of his death, Tonya and Ian travel full circle from their law careers to South Africa, a destination they hold close to their hearts.  (Hint:  they honeymooned there).  World Footprints shares the lasting legacy of Mandela as it showcases other sides … Read more