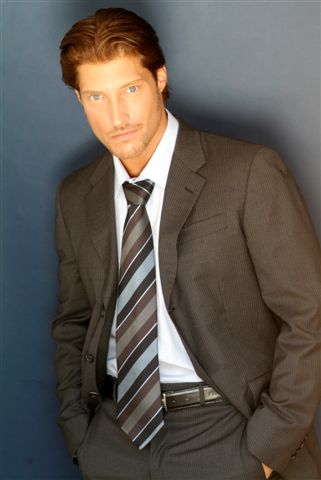 Sean Kanan is an actor who is best known as the deviously sexy Deacon Sharpe on THE BOLD & THE BEAUTIFUL and  THE YOUNG AND THE RESTLESS, the number one show on daytime television.   Kanan is set to begin filming the lead role in the feature film, MY TRIP BACK TO THE DARKSIDE, directed by Shane Stanley.  Recently Kanan starred in ABRACADABRA, directed by Julie Pacino.  The film premiered at the Cannes Film Festival.  Early in his career, Kanan was chosen at an open call by Oscar winning director, John Avildsen from over 2,000 hopefuls for the role of Mark Barnes in THE KARATE KID III.  He went on to use his martial arts skills again in the feature CHAOS FACTOR and co-starred in the films EXTREME LIMITS and CARPOOL GUY.  Kanan’s popularity in Italy and ability to speak Italian garnered him the lead role in the film, SONS OF ITALY and landed him on the Italian version of the popular show DANCING WITH THE STARS.

In conjunction with his acting career, Sean Kanan has had great success as a producer and writer.  Drawing on his experiences from an east coast boarding school, he wrote, executive produced and acted in the Lion’s Gate film, CHASING HOLDEN.  Kanan produced and starred in the film, MARCH which aired on HBO.  He also produced and starred in the horror film, HACK and produced and starred in the independent thriller, JACK RIO.     On the comedy stage, Kanan has performed at some of the countries leading clubs including The Laugh Factory, The Comedy Store, Dangerfield’s, The Brokerage, Uncle Vinnie’s and other venues.  In addition, he has performed in Sam Shepard’s TRUE WEST  at the Zephyr Theatre and in IT’S JUST SEX at the TWO ROADS THEATER.   Kanan’s television guest stints include TRUE JACKSON VIP, FREDDY, WHO’S THE BOSS?, VIP, THE NANNY, WALKER:TEXAS RANGER and LOIS & CLARK.  Other television work includes series regular roles on GENERAL HOSPITAL as A.J. Quartermaine and as Jude Cavanaugh on SUNSET BEACH.  He also had a regular role on the series CAMERA CAFÉ, executive produced by Antonio Banderas.  He worked under executive producer, Francis Ford Coppola on the prime time series THE OUTSIDERS and he appeared in the mini series WILD PALMS, executive produced by Oliver Stone. Sean Kanan spends his free time studying martial arts, writing scripts, cooking, performing his stand-up routine and further pursuing the study of the Italian language.