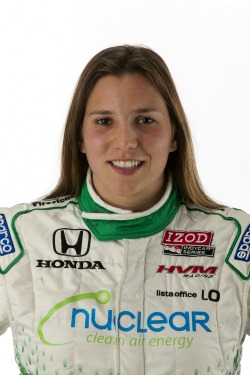 Simona De Silvestro spent her early career honing her racing skills in Europe. 2003 and 2002 saw the youngster earn a second-place finish in the Trofeo Industria Parma, fifth in Wintercup Lonato and third in Primavera Lonato. She also finished seventh in the Swiss Championship, thirteenth in Kart-Cup Monaco and 2nd in the Bridgestone-Cup Switzerland. In 2004 she raced in the French Formula A Championship and finished fifteenth overall and in 2005 Simona finished twenty first in the Formula Renault 2000 Championship in Italy. In 2006, Simona crossed the Atlantic over to the United States to pursue her open wheel dreams. That year she completed her first season in the Formula BMW USA championship collecting a victory at Lime Rock, six podiums and eleven top-10 finishes en route to a fourth-place finish in the overall point standings. She also scored two third-place finishes at the U.S. Grand Prix and made history by becoming the first woman to ever earn a podium result at the Indianapolis Motor Speedway. In 2007, as a rookie in the Atlantic Championship, De Silvestro earned two top-10 results and scored championship points in nine of 12 races en route to 19th in the point standings with Walker Racing and followed that up in 2008 when she earned eight top-10 finishes, including her very first win at Long Beach for the Late Paul Newman’s outfit, Newman-Wachs Racing.

In 2009 Simona De Silvestro picked up her game and stunned the North American open-wheel world. She would go on to win 4 races in dominant fashion with Team Stargate Worlds. In addition to her wins she also earned 4 pole positions and an extraordinary 9 podium finishes in the 2009 Atlantic Championship Season. Her success was not only impressive but it was also record breaking. De Silvestro, who is often referred as “the Swiss Miss” because of her Swiss upbringing, was the first woman in series history to have earned the most wins, pole positions, and led the most laps all in a single season. At the end of the season De Silvestro also had an extraordinary 9 podium finishes. The results of her effort led to her finishing the season in 3rd place, proving to observers that she is on par to becoming open wheel racing’s next shining star. 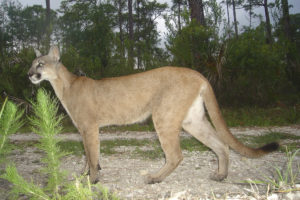 Simona de Silvestro driving in the Baltimore Grand Prix.  Photo:  Tonya Fitzpatrick On today’s show World Footprints explores the plight of the endangered Panther, we chat with one of the rising IZOD Indycar stars Simona de Silvestro, and we also view Catholicism through the lens with Father Robert Barron.  As … Read more