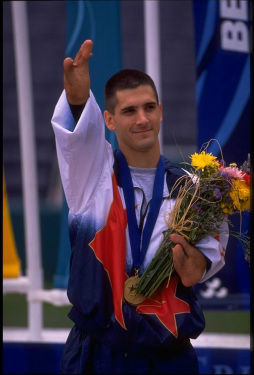 Tony Volpentest is inspirational from the first moment you meet him.  He was born without hands or feet, but instantly you know this has not hindered his ability to lead an exceptional life.  His message is simple: “If you can dream it, you can achieve it.”  He dreamt of walking, of running and being the fastest in the world.  He achieved that success. In high school, Tony was a shy yet smart student.  At the age of 15, Tony joined the track team knowing “nobody got cut”.  He came in last at every race but ran as a way to make friends.  During his junior year he was introduced to his “flex feet”, carbon-graphite feet which are bolted to prosthetics that he wears.  By his senior year in high school, Tony was consistently coming in second and third place running times close to Paralympic world records.  He knew if he concentrated and visualized himself running, he could break those world records.  He could start changing stereotypes people have of others with disabilities.  He could make a difference, he could become a voice. Tony Volpentest is a four-time Paralympic Gold Medalist and five-time World Champion sprinter.  He began his international dominance as far back as 1990 when, at age 17, he claimed gold in the 100 meter, 200 meter and 400 meter at the World Championships in St. Etienne, France. However, it was Tony’s two world records at the 1992 Paralympic Games in Barcelona that speaks for itself.  Here he claimed two gold medals, taking victory in the 100 and 200 meters as well as picking up silver in the 400 x 100 meter relay. July, 1996. Atlanta, Georgia Paralympics.  Tony once again confirmed his status as one of the world’s finest athletes.

Having been chosen to carry the Olympic Torch in homeland, U.S.A, and inspired by a large home crowd, Tony Volpentest once again claimed gold in the 100 meter setting a new world record (11.36 seconds) and took home another gold in the 200 meter. In 1999 at the ISOD World Championships in Barcelona, Spain, Tony’s fierce determination and unsurpassed strength led him to gold again in the 100 and 200 meters as well as a new world record in the 200 meter (22.85 seconds). Tony has also had significant success competing in road events throughout the US (Goodwill Games, U.S. Olympic Fest), Canada (Bailey vs. Johnson One to One Challenge of Champions), Australia (XI Paralympic Games), and Japan. He has won numerous honors including the International Olympic Committee Presidents Disabled Athletes Award, the United States Olympic Committee Athlete of the Year Award, the Franklin Delano Roosevelt Award for the Physically Challenged, Seattle Post-Intelligencer Sports Star of the Year Award Winner (1992 & 1996), National Spokesman for Shriner’s Hospitals (1991 – 1993) and in 2009 was nominated to be inducted into the Olympic Hall of Fame. Tony’s charismatic personality has earned him national exposure and features on ESPN, 48 Hours, CNN, Ripley’s Believe It or Not, How’d They Do That, Maury and Sports Illustrated, to name a few. Today, Tony Volpentest shares his story hoping to inspire others through his experiences.  He currently speaks on behalf of the United States Olympic Committee as an Athlete Ambassador helping to prepare both Olympians and Paralympians for the 2012 Olympic and Paralympic Games in London.  His personal voyage of strength and persistence has inspired thousands of audiences worldwide.  Tony’s motivational story will give you the confidence and inspiration to improve your attitude about life, success and work. Tony resides in Chandler, Arizona, with his wife and children where he actively participates in activities such as weight lifting, golf, basketball, football, bowling, cycling, swimming and of course, running. 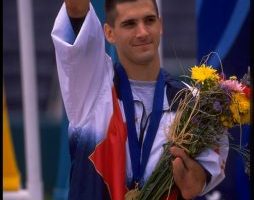 Today we will share positive vibes from a Paralympic Champion, race into London 2012 with a remarkable person and special athlete, and “Hurdle Adversity” with a leading Paralympic Advocate, athlete and motivational speaker. Meet Tony Volpentest.  Tony achieved his dream of running in the Olympics, becoming a four-time Paralympic Gold … Read more