Vern Kimball has been chief executive officer of the Calgary Stampede since 2006. As CEO, he is responsible to the board of directors for leading the organization. Prior to this role, Vern was chief operating officer for two years, chief financial officer for 10 years and held significant roles in Food Services, Sales and Facilities, and long-range planning since joining the organization in 1986. Vern has an MBA and bachelor of arts from the University of Calgary. He contributes his time and energy to a number of community organizations including the Rotary Club of Calgary, the Faculty of Communication and Culture at the University of Calgary, and serves as director of the Calgary Philharmonic Society. Calgary Stampede Website.

Born in Hamilton, Vern Kimball spent his early years abroad, spending a year in Portugal and three in Africa before returning to Canada. He moved west in 1974, attending the University of Calgary, where he obtained a degree in political science and an MBA. His real education came not in the classroom, but behind cafeteria counters. Starting as a part-time worker, he quickly discovered that he liked food services. At 21, he was managing a multimillion-dollar cafeteria for the University of Calgary. A half-decade later, he became second in charge of university food services. Two years before the 1988 Olympics came to Calgary, Calgary Stampede hired him for its food services division. He has been there ever since, working on the midway and long-range planning before spending 10 years as chief financial officer, two as chief operating officer, and now six as CEO. It’s a position he intends to hold, he says, “until the fire in my belly leaves. I’m having lots of fun.” 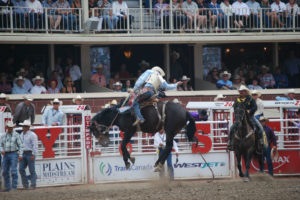 Inside the Calgary Stampede and Siksika Nation

World Footprints will take you inside “The Greatest Outdoor Show On Earth”—the Calgary Stampede.  The Calgary Stampede is an annual rodeo, exhibition, and festival held every July in Calgary, Alberta, Canada. The ten-day event, which bills itself as “The Greatest Outdoor Show on Earth”, attracts over one million visitors per year and features one of the world’s largest rodeos, a parade, midway, stage … Read more