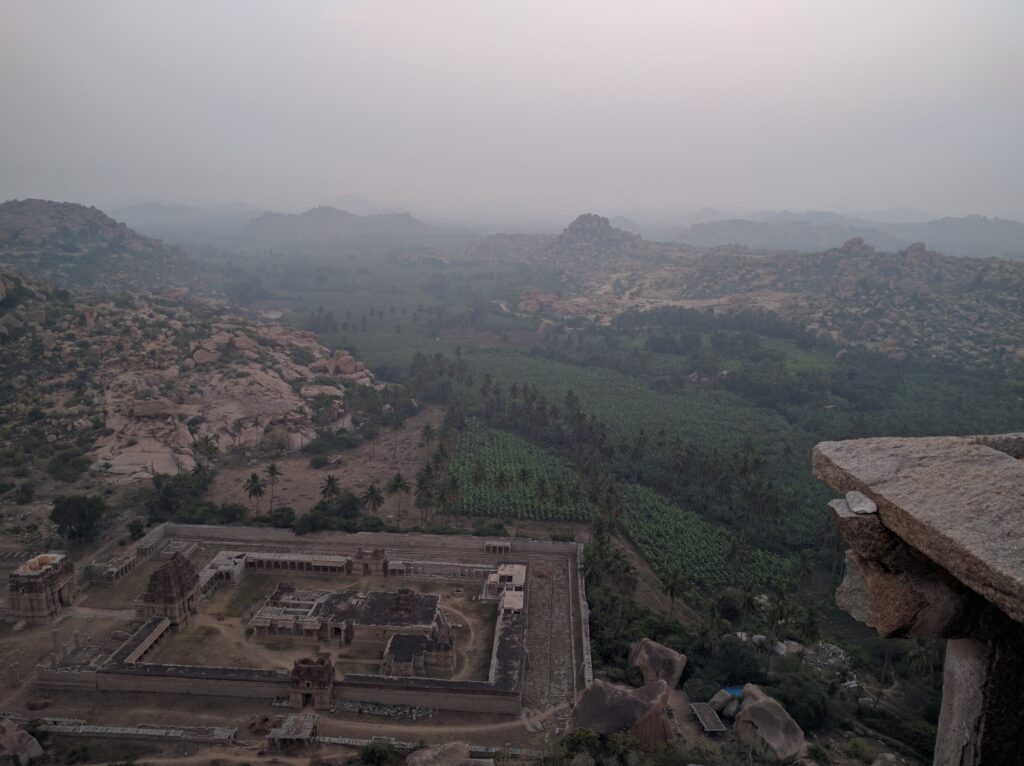 The stars are beginning to fade as the morning mist glints from my bus windows and my eyes behold a unique landscape made up of boulders of all dimensions. Have I been transported back in time to 500 years ago? This was the only question crossing my mind when I reached this small village with the historic enigma of ruins. The ruins created an incomparable degree of beauty to this place, as the palm trees swayed and the dawn brought a silhouette effect to the surrounding boulders.

Before I plunge into my memoir, here is a short history of Hampi. Hampi is a UNESCO World Heritage Site located in the southern part of India. Hampi was a prosperous city and the capital of the Vijayanagara Empire in the 14th century. It was a rich kingdom and was frequented by traders from all over the world.

Vijayanagara was defeated by Muslim Sultanates in the 16th century, leaving the capital of Hampi in ruins. Ancient temples, watchtowers, royal enclosures, and remains of a palace dot the landscape of Hampi today.

From the bus station, the auto-rickshaw wala dropped me in the main village near a magnificent temple. The tower in the main entrance of the Virupaksha temple is dedicated to Hindu God Shiva. I walked across the temple to Hampi’s main bazaar, a place that was once a busy hub of the town. Allured to watch the sunrise, I climbed up some small boulders opposite the temple and walked into cave-like structures to find a perfect spot for myself to witness the break of day. The sun rose behind the boulders and the palm trees — sigh. I was already captivated.

I was relishing the serene scene, but a couple of vicars crossing the path said, “Hello! You shouldn’t be here alone because some leopards are roaming around this place.” I was bewildered and felt a need to be cautious, so I left and checked into my hostel for the day.

Later, I hired a bike from my hostel and drove to the birthplace of Hanuman, a Monkey God in the Hindu religion. Hanuman is one of the central characters of the Hindu epic Ramayana and it is believed that he was born on this Anjaneyadri hill in Hampi. People were chanting, ‘Jai Shri Ram! Jai Shri Ram!’ I felt very fortunate to be able to climb up that hill and loved the thought that somebody that was born thousands of years ago is still adored today. It was very calming to be in that place, and I spent my evening here soaking in another beautiful sunset.

The next day, I started with an early morning hike to Hampi’s highest hill, Matunga. It was a tough climb because the path carved to climb the hill seems precarious. However, I climbed up safely and sipped chai tea while gazing at the clouds because, unfortunately, the sun was hiding. But it did show up after some time and the view was glorious.

One afternoon, I entered an elevated fort with an open space, in the middle of which was Lotus Mahal. A place of relaxation for the royal families, it was clear to me that its architecture was built in the styles of both Indian and Muslim. I was thinking it might be one of the few structures that did not suffer any major damage when Hampi was invaded because it looked to be quite intact.

After Lotus Mahal, I walked into room-like structures that featured sphere-shaped Gumbaj (dome) at the tops. Curious, I later went online to find out about the purpose of these structures. I found they were the shelters for the royal elephants and the walls are plastered with lime and sand paste, which makes them very chilly. I walked from one shed to another with a small door, stepped out, and relaxed in the open space found on the other side.

My final destination was Vittala Temple: the most extravagant architectural showpiece of Hampi, by which I was very intrigued. I drove to Vittala Temple and hired a tour guide because this temple is filled with mysteries and architectural wonders that I wanted to learn all I could about.

The temple includes a set of pillars that could produce music without any other instrument. My tour guide explained, “Those pillars can be tapped with your thumb to generate music similar to the notes of Saregama.” Research suggests that these pillars produce music because of the presence of metallic ore and large amounts of silica in the rocks used to carve the pillars. This was a spectacular display of the magnificence that can be found in ruins.

We moved into the front courtyard to see the Stone Chariot, a large attraction at the temple that draws tourists from near and far. My guide disclosed, “The chariot appears like a monolith, but it actually isn’t. It is built out of multiple stone slabs, carved and stacked on each other. The links are cleverly hidden.” He continued, “On these stone cars, you will find carvings of soldiers, hunters, riders, Portuguese, Arabs, and Persians.”

My day passed by after visiting all these incredible Indian architectural masterpieces and while there is so much more to explore in this village, my time was too limited. I’m sure I will be going back to dive further into this rich cultural destination in the coming years.

Sometimes history feels like the chaos that I could debate for days, but sometimes it feels like a story to take inspiration from. For me, Hampi is that story I can take inspiration from. Although its architecture is ruined, it has a sense of beauty in itself. Hampi’s boulders are a perfect way to describe how Mother Nature has given us infinite options in terms of patterns, colors, and textures. It holds a great glory that is often forgotten today. 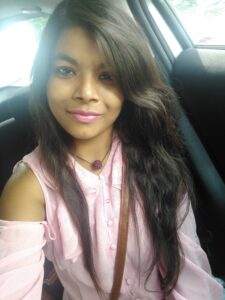 Deepika Akhshar is a freelance content creator, a solo traveler & an aspiring travel writer based in Chennai. She has written exclusive, non-promotional articles for lifestyle and marketing channels. She documents her travel experiences on her personal blog, Hippietravelclub. Leading from her own experiences and values, Deepika believes everyone deserves freedom of time, location, and money. So, she left her former career as a programmer in one of the Fortune 500 companies and now works in digital media on her own terms of freedom. When she’s not contemplating ideas in front of a screen, Deepika likes gazing at the sky, photographing the natural world, and investing in personal development. You can find her on Instagram.