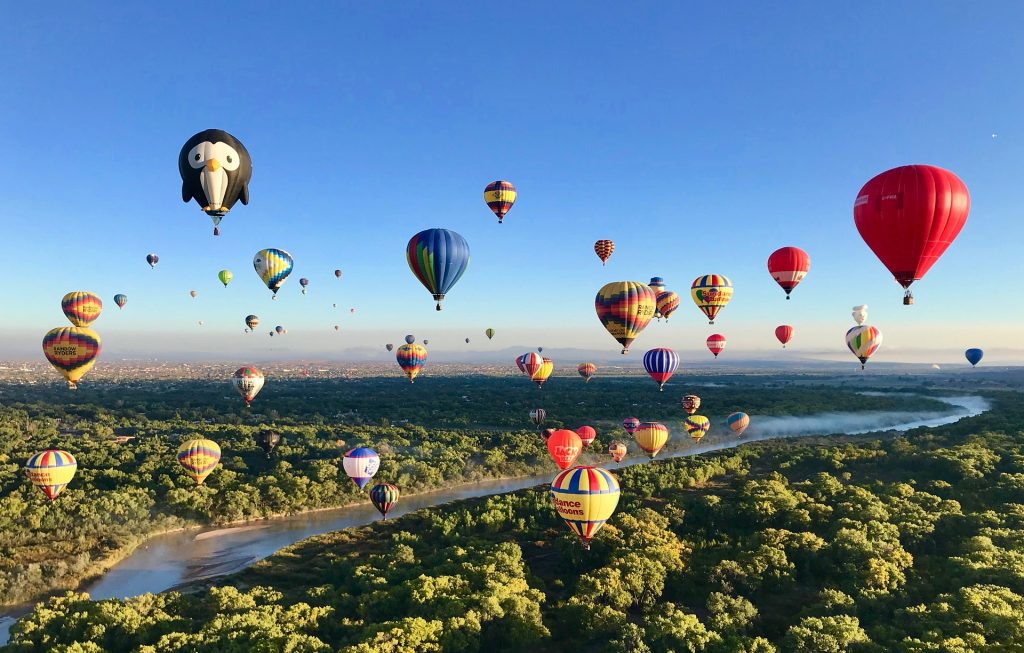 A major highlight in Albuquerque, New Mexico, is a hot air balloon ride at daybreak.

But floating through the sky into the sunrise is not all there is to do in Albuquerque, and this city is full of culture and education to provide a well-rounded and enriching experience. Before you fly Albuquerque‘s friendly skies, tour the Balloon Museum and learn about balloon flights as they have evolved from 1783 to the ones you will take today.

Here are some other recommended attractions when exploring the gem that is Albuquerque.

Visit Old Town, where you step back to the original Spanish Colonial Albuquerque of 1706. San Felipe de Neri Church, circa 1793, stands in the background. There may be Native Americans performing traditional dances around the plaza gazebo. Often indigenous artisans sit along the side and sell handmade jewelry and other crafts. Colorful shops, galleries, and restaurants line the streets where antique cars are parked. Courtyards offer glimpses of silversmiths and other craft shops. Expect to meet a few friendly resident cats guarding their shops.

You can step farther back in history at the Indian Pueblo Cultural Center. Indians from nearby pueblos perform traditional dances and tell stories passed through generations.

In the museum, the exhibits tell stories of New Mexico’s Native Americans from the earliest pictograms to notable modern-day tribal members.

Want to see prehistoric New Mexico? You can at New Mexico Museum of Natural History and Sciences where you’re greeted out front by Alberta and Spike, their resident dinosaurs. No, they are not real but they are impressive sculptures. The museum tells New Mexico‘s story in varied ways, from the first multi-cellular life to the space age. One impressive exhibit deals with climate change — how it’s happening and its results.

If you’re looking to hunt for treasure, visit the Turquoise Museum, which delivers treasure on several levels. Jacob Lowry, museum director and fifth generation of the family business, is a wealth of knowledge about the turquoise gem. The building itself is also a treasure. It looks like a historic German castle but in reality, it was built in 2008 by Gertrude Zachary, a wealthy jeweler, who lived there until her death in 2013.

The museum’s treasure trove consists of some of the rarest and most expensive turquoise stones in the world. The museum is an educational gem also, as you can learn the history of turquoise, how to tell real from fake stones, and the art of cutting turquoise.

Albuquerque Museum of Art and History

The Albuquerque Museum of Art and History offers a mix of the story of Albuquerque as well as painting and sculptures. Naturally, it has traditional art, but there’s so much more than that. From the culture of the Tiwa people who once occupied what is now Albuquerque to the city’s contribution to the atomic age, you will find it all here.

When you enter, you’re greeted by “Pioneers of the Atom”: an exhibit showcasing the individuals who influenced the nuclear world. The museum traces the nuclear history from the first splitting of an atom to today’s uses of nuclear power. There’s a replica of operations at Las Alamos and a model of “Fat Man,” the bomb dropped on Nagasaki, Japan.

There’s a children’s section that encourages learning while having fun. Outside, there’s an array of bombs and the planes that dropped them.

The BioPark is really three attractions in one: an aquarium, botanical garden, and zoo. The animals that live there range from Mexican gray wolves to Polar bear twin brothers, Kiska and Koluk.

The aquarium offers a look at water-loving species like otters and all types of fish. One of my favorites is the Atlantic Coral Reef Exhibit — such a variety of sea life. The aquarium has a strong emphasis on conservation.

Since I visited in winter, the outdoor plants weren’t at their peak but inside the conservatory, there was a riot of color. Red and orange bromeliads and deep purple orchids bloomed next to interesting cacti with tiny red and yellow blooms.

If all the sightseeing has made you hungry, you’ve lots of choices. Want down-to-earth cuisine? You can’t beat The Grove, which is committed to supporting local farmers and sustainable agriculture. For breakfast or brunch, try the French-style pancakes topped with fresh fruit; for lunch, the Farmers Salad, made with greens, sausage, and goat cheese.

Looking for something unique? El Pinto Restaurant and New Mexican Salsa Company combine a huge dining facility with a packing plant for two of New Mexico‘s favorite products: salsa and green chili. El Pinto Restaurant was founded in 1962. Its second-generation owners, twins Jim and John Thomas, have grown it into the largest restaurant in New Mexico. It’s a luscious maze with many rooms and a patio for dining.

Their ribs are named some of the best in New Mexico by the Food Channel. You have to try one of their tequila specials — they are fantastic. This place is very animal-friendly. You may meet one of their resident cats and hear the chickens in the background. They are the only Animal Welfare Approved restaurant in the country with a laying hen program on restaurant property.

Los Poblanos Ranch combines an organic vegetable and lavender farm with a restaurant and inn. The restaurant, CAMPO, has an open kitchen with a flaming grill where you can see your food prepared. The bread and pastries are melt-in-your-mouth-delicious. My suggestion for breakfast is the Farm Breakfast consisting of two eggs, house-made sourdough toast, cracked potatoes with local-grown herbs, and choice of meat.

Wander around the grounds and meet their cats and peacocks. The inn is worth booking a stay. The rooms all have views of lavender fields, gardens, farmland, or the Sandia Mountains. They offer walking farm tours during the warmer months.

If you’re craving a great glass of wine try Casa Rondena, Sheehan Winery, or Lescombes Winery and Bistro. All have their own unique wines and story. Casa Rondena is very upscale; Sheehan is a family-operated up-and-coming winery.

Only Lescombes offers dining options. Jalapeño-Bacon-Wrapped Shrimp is a must-try appetizer. For an entrée, there are many great choices. The chicken is fantastic, but so is the pasta, beef, or pork. Each entrée is paired with a wine.

Another upscale choice is LVL5 at Hotel Chaco. You’re on the fifth-floor rooftop with surrounding windows offering a terrific view of the mountains. My choices: Artisanal Charcuterie & Cheese for an appetizer, Watermelon-Guava BBQ Glazed Chicken Breast with acorn squash, vegetable slaw, and tempura grapes for the entrée. Sunset here is perfection, as is the hotel. Once you step inside, you feel like you are in a modern version of Chaco Canyon. Hotel Chaco is filled with contemporary Native American New Mexican art. Rooms are spacious and comfortable.

All in all, Albuquerque is a destination of the high life.

2 thoughts on “Have a high time in Albuquerque”