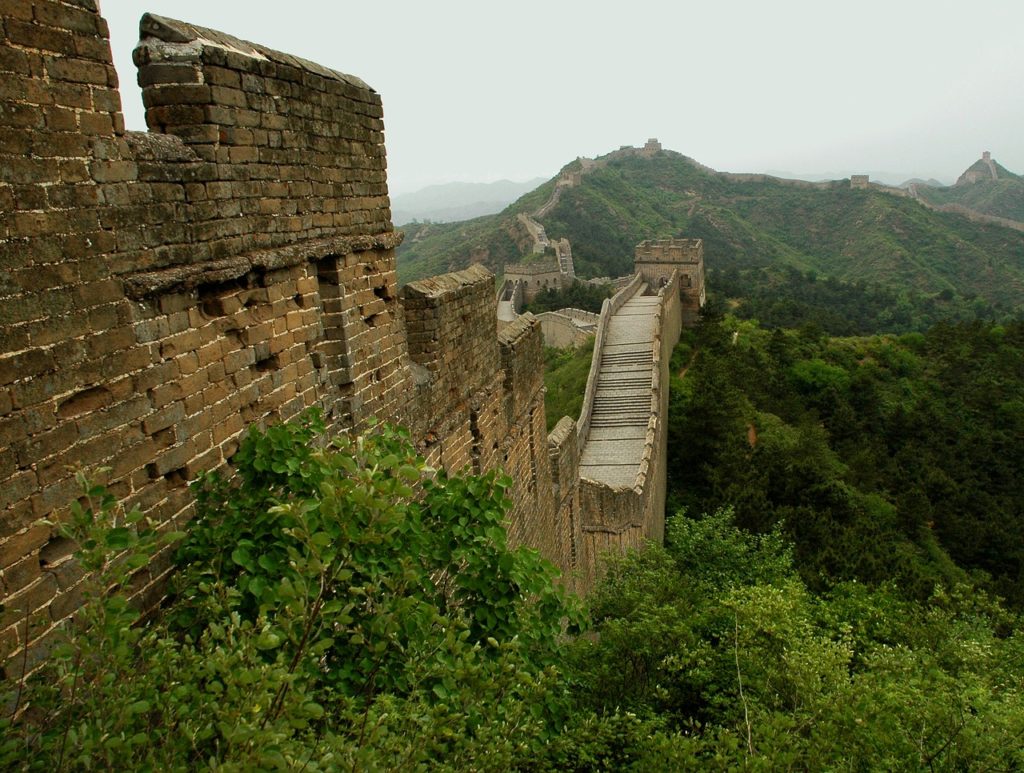 China was a place I wound up in much by accident. It’s a place that tends to give most people intense culture shock, but once it wears off, you’re left to marvel at this beautiful place surrounding you. China is such a big country with such a diverse landscape and a rich cultural heritage that dates back thousands and thousands of years, which means it has plenty of fascinating things to explore.

So stop complaining about the squatter potties for a minute and tune out the sounds of spitting in the background and be sure you head to some of China’s most renowned historical landmarks. You will truly be humbled.

It’s not a surprise to include this on a list of historic places to see in China. After all, you can see it from outer space so it makes sense that you really should see it while you’re here on Earth. My husband and I took our eldest daughter when she was just 8 months old. It was the dead of winter, an ideal time to visit if you can hang with those subzero temperatures because there are very few tourists. So you’ll get the chance to truly explore the wall without having to deal with the crowds.

The wall itself has quite a history to it. It’s over 2,300 years old. It was constructed by different dynasties in different places to help protect territories. Which is why it zigzags a bit through the mountain ranges. You can access it in different points; though going on tours from Beijing is the easiest way. Hiking is a great way to see the Great Wall, even if you have a baby with you, though my biggest advice is use your baby carrier and leave your stroller at home. The wall is very steep and it can be disconcerting in certain points, but it is breathtaking to stand on top of it and feel the history flow through you.

And while you’re in Beijing visiting the Great Wall, make plans to head to the Forbidden City, sometimes called the Palace Museum. It was once the imperial palace for both the Ming and Qing dynasties, respectively. What we found most fascinating here is how the layout was designed to follow feng shui. The architecture of this place is sublime and truly remarkable when you consider the time periods. Remember, the Ming Dynasty was from 1368 to 1644 and then the Qing Dynasty took over from 1644 to 1911. It’s a lot of history and really amazing artifacts to see here. Again, we visited in winter so we were among very few tourists.

It has been suggested for consideration as the eighth wonder of the world and when you get there, you will see why.  There are three pits that cover 22,780 square meters with over 8,000 life-size terracotta soldiers and their horses. When they dug up this place, they found over 10,000 bronze weapons. Located in Xi’an, the only thing that could have possibly blown me away more than seeing these life-size statues was finding out from my Chinese husband that the soldiers were all facing east. He explained to me that this was to face toward Emperor Qin’s enemies during the time period of the Warring States. These terracotta creations are absolutely beautiful and I’ve never seen anything like it before or since.

Sorry, it’s back to Beijing again because it was in this city that we spent the most time enjoying the history. Ask me another time how I loved frolicking on the Bund in Shanghai, which is lovely and has some history to it, but the capital city of Beijing is truly a place of majestic historic wonders. That’s where this UNESCO site sits. The Summer Palace is the largest imperial garden in China. It was added to the World Heritage List in 1998. When you see it with your own eyes, you see just why. Places like this are exactly why you need to visit China. It’s magnificently stunning. The hills also with the water are remarkably tranquil. Then you have the palaces, bridges, and temples and it’s like something you’d see in a movie set, but it’s all very real. Historically, this place was, as the name suggests, the royal summer resort for the Qing dynasty. If you really want to treat yourself, take a boat cruise on the lake.

There are many other places to see in China, outside of Beijing too, however I didn’t get to visit them all despite living there 5 years. It is one of the things I regret, but it is hard to see everything there. I’m fortunate to have been to the places I’ve seen and I can only wish you the same good fortune.