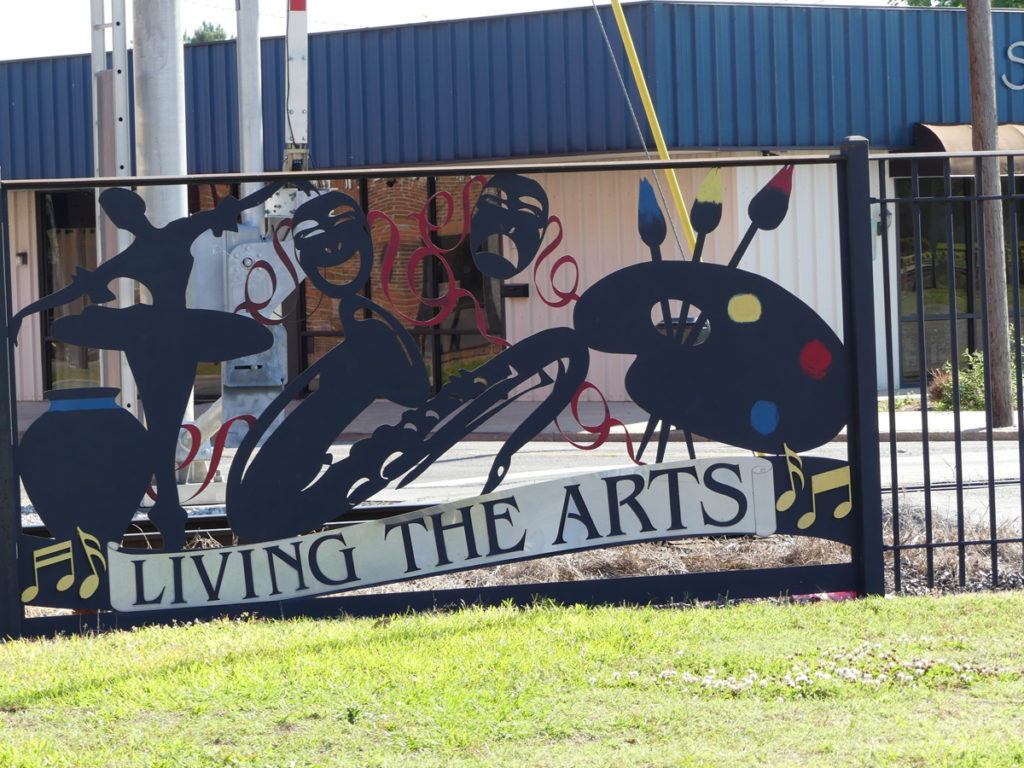 They say art is in the eye of the beholder. When you visit Kinston, North Carolina, art will be in your eyes, ears, and taste buds too. Art is everywhere. The city, with a population of 22,000, southeast of Raleigh, wasn’t always like that. Kinston started life in 1762 named Kingston in honor of King George III. After the Revolution, it was renamed Kinston to show the town’s disavowal of British royalty. Most recently, the city has transformed itself into growing art hub.

After the civil war, Kinston became a tobacco trading and cotton-milling center. There’s nothing very artistic about either of those businesses, but today the buildings that housed those industries have become major art projects. This revitalization can be pegged to when the Kinston Community Council for the Arts moved, about 20 years ago, to their present location in the 100+ year-old former Sumerell-McCoy Wholesale Produce Market, which is listed in the National Registry of Historical Places.

Sandy Landis, the Art Council’s director, explained that art has flourished in Kinston because the town looked for economic stimulus outside its traditional resources. “We have diversified. You need to reorganize and refresh as often as you can.”

Most of the original building blocks of the market, the brick, mortar and timber, are preserved and complement its present use by providing a historically and aesthetically pleasing setting. The Council houses galleries are on the first and second floors. A clay studio, private artist studio and music studio are on the second floor. The basement’s big attraction is a model train display. With its miniature cities and countryside built around the tracks, it is also truly a work of art.

Music claims a big place in the arts in Kinston. In recognition of that, the Arts Council, with Director Landis at the helm, was a big factor in creating the African American Music Trail. The trail, dedicated in 2015, runs through eight eastern North Carolina counties, but in Kinston its main feature is the Music Park, located in the Sugar Hill district, once the hub of African American music.

The highlight of the park is the 12-foot high, 23-foot wide glass sculpture titled, Intersections, portraying famous jazz, rhythm and blues, soul, and gospel musicians from Kinston and nearby North Carolina communities. The park also displays large colorful tile mosaics portraying local musicians. It was a school project created by Kinston students under the direction of artists September Krueger and Anne Brennan.

Some of the local musicians recognized in the park are Nathaniel “Nat” Jones, the acclaimed musical director for James Brown’s band during the 1960s. Another is James Brown band member Dick Knight, as well as the Uptighters, a 1970s band led by Tyrone Greene.

Women are recognized in the Women in Jazz Mosaic. International Sweethearts of Rhythm, a multi-racial, all-female jazz band popular in the 1940s and 1950s are memorialized as is Geneva Perry, who played saxophone with the band and was music director at Adkin High School in Kinston.

In an interview, Landis told of how in the old days of segregation, many well-known musicians played in Kinston at the Shappard’s Warehouse, which is also part of the Music Park. Duke Ellington and Louis Armstrong, who usually booked four to five thousand-person venues, were among the bands to play in Kinston. “They performed in an old tobacco warehouse with a rope down the middle dividing the races. Before the night was over, the rope was down and people were dancing in the aisles,” said Landis. “Music brought people together then and I was determined to have it bring us together again.”

The Arts and Cultural District, a neighborhood downtown, was once a section of old mill worker houses. The houses have been renovated and are offered to artist as both a home and as a studio and gallery. A city program is designed to lure artists to Kinston by providing them with housing and other incentives. It’s aimed at those who practice all genres and mediums, including visual, musical, literary and even craft. The brightly colored exteriors and cute white picket fences on the old mill worker houses are a signature style of the project and proclaim “Art Lives Here.”

Art is not confined to indoor galleries. Flue, an outdoor art project by Thomas Sayre, comprising seven earth-cast tobacco barn facades, stands in Tobacco Square. The massive art pieces resemble the outline of a tobacco barn. They rise to a height of more than 28 feet and are starkly riveting against a blue sky. “The form and content of this sculpture comes from the rich agricultural heritage, which in no small part formed the town of Kinston,” the artist Sayre said about Flue.

Kinston’s Arts Riverwalk, a paved walkway, runs besides the Neuse River past the CSS Neuse II, the world’s only full-sized facsimile of a Confederate gunboat recreated by volunteers and is a work of art in its own right.

North Carolina’s Chairman of the Council for the Arts

Food has been elevated to an art here too. “Chef and the Farmer,” a restaurant owned by local-born Chef Vivian Howard and her husband, Ben Knight, take locally grown food and turn it into culinary works of art.

Another local, Stephen Hill, who is North Carolina Governor Roy Cooper’s latest pick for chairman of the NC Council for the Arts, is also involved in culinary pleasures, though he is a champion of the arts on many levels in Kinston. His “Mother Earth Lodge” is a restored 1960s era motor court. Each room sports different oil paintings of Kinston scenes.

In the Mother Earth Brewery Taproom, co-owned by Hill with his son-in-law, Trent Mooring, you’ll find one of Hill’s own art works, a modernist cityscape based on the view from his penthouse window. Flanking that are paintings by Mooring and the brew master.

Even the beer bottle labels are a work of art painted by a local artist, Dinah Sylivant. Many of the pictures relate to Kinston scenes. One label, Sisters of the Moon, an India Pale Ale, was painted from a photograph of Hill’s three daughters when they were teens dancing around a fire in the moonlight.

Another of Hill’s restorations, The O’Neil, originally a Farmers & Merchants Bank, now a boutique hotel, is an architectural work of art spawned by City Beautiful Movement of the 1920’s, an American urban-planning movement that flourished between the 1890s and the 1920s. It was built in Renaissance Revival style on what was called Bankers Corner to grace a city rising as a commercial center in the early 20th century. Each of its seven rooms is decorated with unique art. The highlight of the building is its intricate plaster ceiling, with colors ranging from pale blue to metallic gold to deep green. Twenty-two different shades bring out the intricate detail.

Kinston, a city rising from the ashes of its past through investment in the arts, is a city brimming with things for visitors to see and do.

Ian has spent a lot of time in Kinston because his family is from there. To hear about his Kinston memories and how arts are reviving central North Carolina towns like Kinston listen to: Reviving North Carolina Towns through Art and Tourism