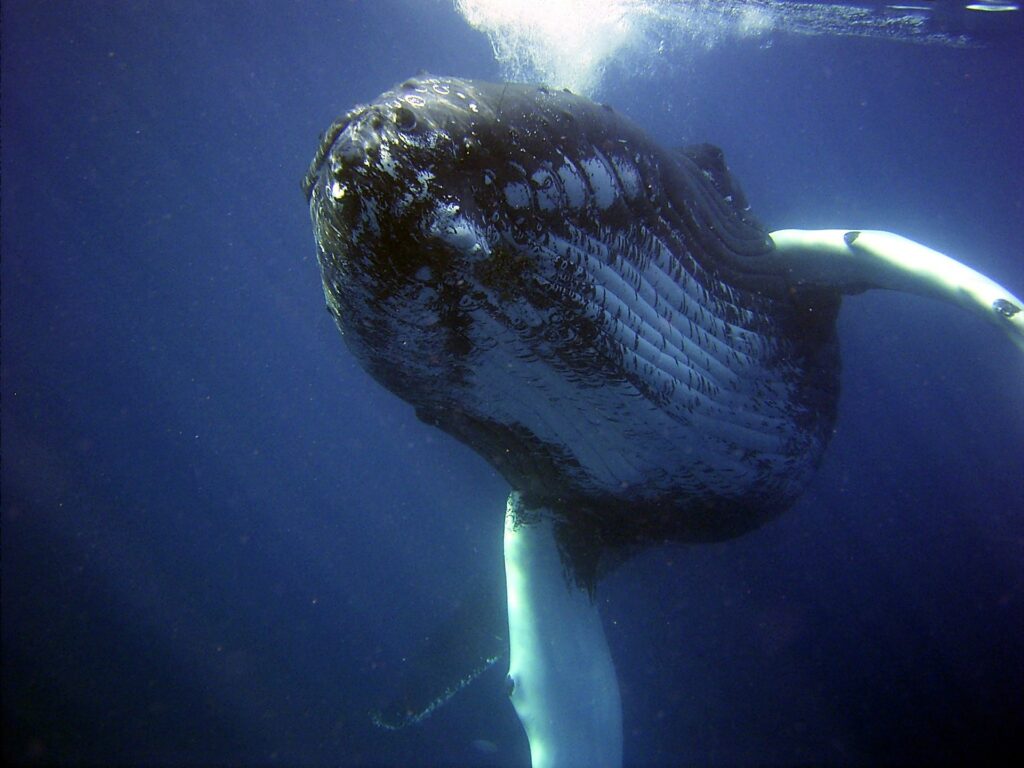 A huge speckled flipper. A spray of water off the port bow. A massive head surfacing, revealing an animal, a whale, that is as big as your boat. Gazing into surprisingly emotive and humanlike eyes.

It’s one of those moments that leaves you breathless. Later, you’ll recall it only as a fragmented series of images, like the pictures on your camera, blurred by water droplets. It’s a flashbulb moment that can change you forever if you let it.

If you’ve ever been whale watching, you know what I’m talking about. There’s something indescribable about getting up close and personal with a creature that is both so alien and so familiar.

Whales, it turns out, are a lot like us. They live in family groups whom they go to great lengths to protect and care for. They love to sing, and “chart-topping hits” spread quickly from group to group. They’ve even been known to stand up for other, weaker species — us — when danger threatens.

Yet, they live in a world that we can only visit. They go places that we can’t easily go.

Whale watching has become a popular tourist excursion worldwide. In North America, for example, you can book expeditions from Alaska to Mexico, from British Columbia to the Caribbean.

But have you ever thought of getting in the water with one? I did.

You may be wondering, is that legal? Is it safe? What effect does it have on the animals? Where can I swim with whales? We’ll get to that, but first, we’ll talk about what it is like to meet a 30-ton animal in the open ocean. Let’s dive in.

Swimming with a Humpback

From the moment we started planning, I knew it would be the trip of a lifetime. I’d always wanted to visit Australia, and we were going to hit some of the highlights: a day at Australia Zoo of Crocodile Hunter fame, aerial views of the Great Barrier Reef, hiking wild places, and hand-feeding grey kangaroos. But there was one excursion that stopped me in my tracks: swimming with humpback whales.

It was a sunny day in July. That’s winter in Australia, but the days were warm, reaching about 70 degrees Fahrenheit during the day. It is also the time when humpback whales migrate north along the coastline after a summer of feeding on krill near Antarctica. Mother whales give birth in the warmer waters and remain there until their calves develop enough blubber to survive the polar cold.

After donning wetsuits — quite a task for first-timers like us — we slowly cruised past moored sailboats, Steve Irwin’s Whale One whale-watching vessel, and out of the mouth of the Mooloolah River. As we reached the choppy open water, the skipper explained that whales are musical creatures who seem to be curious about our own music. As he kicked the boat into high gear, AC/DC blasted over the speakers.

Over the din of “Highway to Hell,” the skipper told us that if a guest could spot a whale before his trained crew, he’d treat us to something special on the way back. We strained our eyes toward the horizon. In the distance, I saw a puff of white — spray from the blowhole. “There!” my husband Marc called out, pointing.

The boat idled within a few dozen yards of the animal, and then the skipper shut the motor off. To the surprise of tourists on a nearby “traditional” whale watching tour, our guide jumped in and we followed, equipped with goggles, snorkels, and fins. She wore a safety-green vest so that we could see her easily, even underwater.

The instructions were simple: enter the water quickly and try to keep up with the guide. Keep our faces under the water, as that’s where the action would be. Don’t touch the whale. And if I ran into a “stinger” — one of the non-lethal jellyfish present at that time of year — don’t rub it, as that would spread the nematocysts and make the sting worse.

When we hit the water, we started paddling. Our guide (and everyone else) quickly outpaced me. I dodged something that looked like a small jellyfish in the water; Marc took one on the side of his face. Looking down into the deep blue darkness, I expected to see the toothy grin of a hungry shark. Salt spray choked my snorkel. I didn’t catch sight of the whale. We boarded the boat once more.

Our quarry had circled under the boat, but once we were on board, she surfaced again. When she did, she had a pale-colored calf at her side.

“She’s playing with us,” our guide said. When the next group jumped in, she did the same thing, swimming to the opposite side of the boat.

On our third attempt, a wave of determination swept over me. I paddled hard despite the fire in my calves. Suddenly, I was catching up with our guide; she had stopped. In front of me, a hulking form materialized. It was as if the dark blue of the deep was condensing. It was her — I was starring into the small and remarkably humanlike eye of a humpback whale, and she into mine.

My momentum carried me past our guide and I paddled with my arms, afraid I would drift right into the whale’s face. Then her nearly white calf came into view. She wasn’t shielding it protectively — she was shepherding it right in front of us, showing it to us. Then, she turned and faded into the navy-hued darkness.

We surfaced, screaming with delight. The guide said we were within four meters. That is less than 15 feet.

After that, our cetacean friend disappeared, bored, perhaps, with the game of hide-and-seek.

On our return, the skipper kept his promise. We circled Shark Island and spotted a green sea turtle. We also snorkeled at the stacks of the HMAS Brisbane, a military vessel purposely sunk to facilitate the growth of the coral reef.

Is It Safe and Legal to Swim with Whales?

There are only a handful of places in the world where you can swim with whales, including California, Hawaii, Tonga, and Australia. The same international standards governing whale-watching apply.

Sunreef Mooloolaba, the dive shop that conducted our tour, acts in accordance with the Australian National Guidelines for Whale and Dolphin Watching (2017) as well as their “own strict Code of Practice which has been developed with whale researchers and experts to ensure the protection of the whales.” This means not touching, harassing, or chasing the whales. If the whales don’t want to play or socialize, they are given their space.

Additionally, tour operators watch for mating or aggressive behaviors. If observed, swimmers are not allowed in the water. Sunreef has successfully and safely operated these encounters since 2014.

It should be noted that while baleen whales have not been known to attack humans and we’re not on their menu, an accidental slap from a huge fin or tail could result in injury or death. But scuba diving — a hobby this trip inspired us to pursue — still remains one of the safest sports in the world.