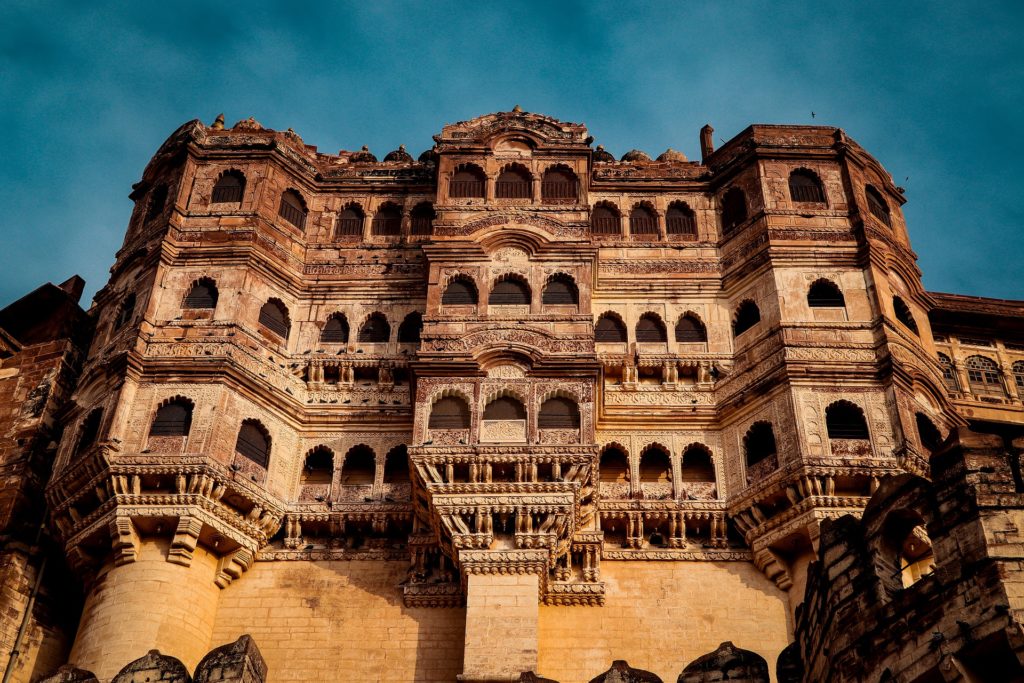 Rudyard Kipling had written about it as “a palace that might have been built by Titans and coloured by the morning sun”. Historians have dubbed it as the invincible fortress of Rajasthan that even the Mughals could not conquer. For an engineer, it is a marvel of masonry work, whose soaring, imposing walls appear to have grown straight off the rocky hillock on which it stands. To the discerning traveler, Mehrangarh fort of Jodhpur is an intricate tapestry of half a millennium of history, intertwined with bravery and artistry. And a few dark secrets.

The fort’s name bears a reference to its founding clan’s mythical descent from the sun god Surya. Mehran is the Persian word for sun, and ‘garh’ means fort.

In 1460, Rao Jodha, a Rajput chieftain, decided to shift his base from nearby Mandore to a stony outcrop on the eastern flanks of the vast nothingness of Thar desert. The elevated base would give his army a strategic location to give notice of marauders. It was a time fraught with violent battles between kingdoms of Rajasthan.

The hillock was locally known as Bhaurcheerhia (mountain of the birds), where a hermit named Cheerhianathji (Lord of the birds), had based himself with his large avian fleet. The king’s relocation displaced the saint and a furious Cheerhianathji cursed Rao Jodha that his new fortress would suffer forever from severe droughts.

A deflection of the curse was needed, and the king took an extreme measure. Raja Ram Meghwal, a commoner living in the area, agreed to be buried alive into the very foundations of the Mehrangarh fort in return for a grant of land to his family in perpetuity.

Winding up the steep gradient of the road that leads to the grand entrance of Jai Pol, you can imagine the chequered history of Mehrangarh written in the age-worn stones and on the cannonball marks on the perpendicular, windowless walls: a swashbuckling tale of invasions and political intrigue in the medieval times. And then you reach a rust-coloured plaque, marked with a wreath, that commemorates Raja Ram Meghwal’s supreme sacrifice. A moment of quiet reflection and you enter the inner recesses of the grand citadel.

In the journey into the depths of Mehrangarh’s storied past, your constant companion is the audio guide. The deep baritone, accompanied by bugles and drums, chaperones you through the fort’s many mahals and museums. The palaces, built over five centuries, are linked by expansive courtyards buzzing with streaming visitors and a fleet of pigeons constantly flitting across the open spaces. The caretakers of the palaces, attired in white salwar suits, saffron sashes draped around their waist and colourful turbans, provide a static counterpoint amid this chaotic din and serve as a throwback to the regal past.

Mehrangarh has seven pols or gates, each heavily fortified. Just beyond the Suraj Pol lies the Coronation Courtyard (Shangar Chowk), where the Rathore rulers of the kingdom of Marwar have been crowned on an elegant marble throne. The detailed latticework of the sandstone windows that almost entirely covers the surrounding walls lets your imagination run free: you can visualise royal women, restricted by the pardah system, but still curious to have a glimpse of the royal coronation ceremony, peering through the chinks of the stone-crafted windows on the courtyard below.

The adjacent royal chambers have been converted into impeccably-maintained museums housing the exquisite possessions of the Rathore dynasty. It is a veritable treasure trove of royal artefacts, solid silver hawdahs (elephant seats) and assorted armaments including Emperor Akbar’s sword and Timur’s scimitar. The room upstairs showcases some of the finest Rajput miniature paintings.

The magnificent Phool Mahal (Flower Palace), with the dazzling stained-glass windows and gold filigree ceiling, was a pleasure chamber of the royals hosting musical soirees and poetry sessions. The 19th-century Takhat Vilas is another ornately decorated chamber, with a curious mixture of paintings of Hindu deities and European ladies — a style reflected in the nearby Sheesh Mahal (Palace of Mirrors), where the panels under the arches depict Hindu mythological scenes, while European glass chandeliers hang from the wooden ceiling. The 16th-century Moti Mahal (Pearl Palace) had been the Hall of Councils, holding state conferences between the king and his advisories. The five alcoves in the lustrously polished wall opposite the entrance are in fact concealed balconies where the queen would secretly listen in on the proceedings of the meetings and later give her advice to her husband.

Zenana Deodhi, or the women’s quarters, unsurprisingly, are a little claustrophobic with tiny chambers. One of them served as the royal birth room that saw a curious ritual over five centuries — the midwife would drop a lemon to the ground below to announce the arrival of a new royal.

The most haunting tale of Mehrangarh is scripted on the stone walls of Loha Pol. Imprints of little palms, carved in haphazard disarray on the wall, tell a tale of the women of the fort who immolated themselves after the king suffered a heavy defeat in a battle with the neighbouring kingdom of Jaipur in 1843.

The final stop of your journey through the cultural and architectural extravaganza that is Mehrangarh would be the crest of this gigantic fort. From up there, the maze of blue that expands to the border of the Thar desert looks magnificent. It is the neighbourhood of Brahmapuri, a settlement as old as the citadel itself, and its blue-tinted houses earned the sobriquet ‘blue city’ for Jodhpur. Walk down the ramparts and spiral your way down the warren of alleys of Brahmapuri, to have an intimate glimpse of the ubiquitous blueness. And from the blue rooftops, the cool cerulean of the humble homes contrasts sharply against the bold, sandy textures of Mehrangarh standing guard over them. This is Rajputana at its spectacular best.