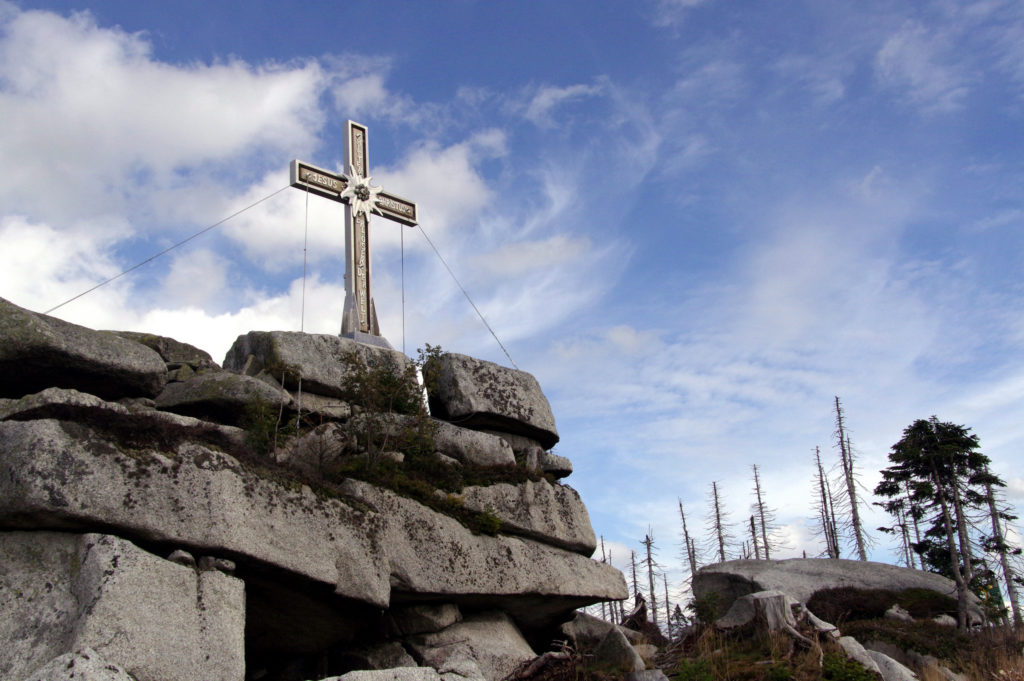 Three crosses have garnered attention from tourists around the world. Due to their mysterious nature, many have come to speculate just what it is that these crosses at the borders between the Czech Republic and Germany symbolize. The imposing symbols are specifically erected at Trojmezi, which is translated as the “Three Borders.” It is so named because it serves as a connecting point between the borders of three former kingdoms: The Kingdom of Bohemia, the Kingdom of Saxony, and the Kingdom of Bavaria.

At the conclusion of World War II, the region was secured by armed forces, forcing individuals who lived on the Czech side of the border to flee their homes. For a period of time, individuals were not allowed to cross back over the border. However, since the border has opened back up, individuals have slowly returned, and rumors and ruminations circling the significance of the three crosses at each border have caught the attention of tourists. Although the crosses are not far apart, it remains an interesting fact that each is erected in a different country.

The cross that has been erected on the Czech side of the border is over a meter in height. The cross is constructed of granite and stands close to the village of Trojmezi. More specifically, it is near an antiquated, crumbling bridge where the dismantled village of Kaiserhammer once existed. Before the close of World War II, the village thrived. However, the village of Kaiserhammer was completely destroyed after World War II, and now the bridge serves as a quiet reminder of what once was. Other than its location, height, and the approximate time of its existence, not much else is known about the mysterious cross that resides on the Czech side of the border.

The Cross at Bavaria

Located in Bavaria, the second cross is approximately 80 centimeters in height. It has incurred extensive damage over the years. The damage produced has since rendered the limbs of the cross nearly unrecognizable, if not non-existent. Prior to World War II, the cross was located beside a road that led its diverse travelers into a rather modest village named Mittelhammer. It was during this time that individuals would traverse that same road in order to attend church in the Kingdom of Saxony. However, after World War II, when Germany became divided into East and West Germany, the road was no longer accessible. It was entirely shut down and protected by a fence of barbed wire, which led to the moving of the cross in the year 1980. The cross was moved to approximately 1,200 meters from Trojmezmi, putting it closer to Nentschau. The exact story and circumstances surrounding the cross at Bavaria remain unknown.

The third mysterious cross that has caught the attention of tourists can easily be located in Mittelhammer. The cross stands guard in front of a church that is situated in Posseck, a nearby village. One of the only things known about this cross is that it has been dated to the year 1779, and it is 1.65 meters in height. In the past, the village of Posseck was not able to be accessed due to the communist regime that had secured it. This area was guarded and controlled due to its prime location on the German border. However, after the end of the communist regime in the region, tourists have found themselves drawn to this location to view and ponder the meaning of the cross placed on the border.

Interestingly enough, not much is known concerning the three obscure crosses located at Trojmezi, where the three borders of the former Kingdoms of Bohemia, Saxony, and Bavaria intersect. The enigmatic nature these structures radiate is a large part of what has drawn innumerable tourist populations to them. Each of the three crosses in question is strategically placed at the Czech -German borders, though their exact significance remains shrouded. Adding to the intrigue is the fact that though the crosses are a mere few hundred meters apart, each resides in a different country. Speculation continues to surround the crosses and their symbolic significance. To this day, individuals visit the area of Trojmezi, hoping to get a better sense of the momentous weight they carry, as well as their crucial and historical role. Although these three crosses remain a common conundrum, they continue to attract individuals from all over the world who insist on visiting them.

Cover: Nove Udoli to Nova Pec via Dreisessel Trojmezi and Plechy 72″ by donald judge is licensed under CC BY 2.0