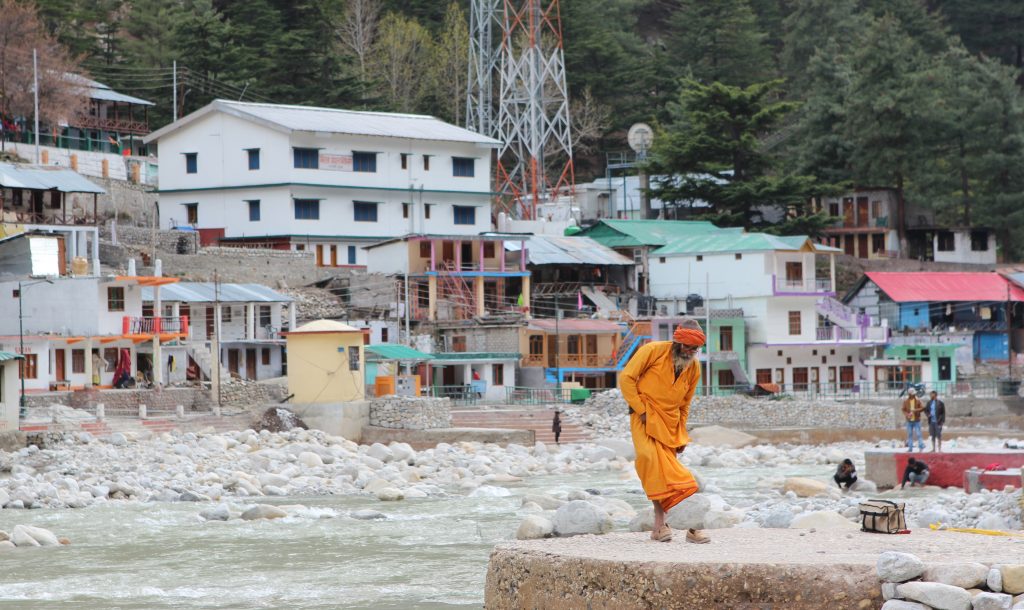 India cradles an ancient and spiritual culture that draws visitors from around the globe. Spiritual experiences in the country range from temple visits and yoga retreats to 10-day silent Vipassana meditations. While India is best known by tourists for wonders like the Taj Mahal, our six-month sojourn brought us to many lesser-known religious sights including the source of the sacred Ganges River in Uttarakhand, the Indian state bordering Nepal and Tibet and known as Devabhumi: ‘The Land of the Gods.’

The Ganges River’s mystic waters cascaded over a precipice and joined a tumultuous swirl below. Though tall pines carpeted the feet of Himalayan giants and the colourful town of Gangotri was visible through the foliage, my gaze lingered on the kaleidoscopic froth beneath the Surya Kind Waterfall. The Ganges seemed agitated and I wondered if it had anything to do with the hundreds of pilgrims and tourists filling souvenir jugs with her waters upstream.

Though international tourists are relatively few, many Hindu pilgrims come from the far-flung corners of India to pay homage to the Ganges, a sacred river personified as the Goddess Ganga. In Hinduism, the river is believed to cleanse and purify so the devout do everything from bathe to scatter the ashes of their kin in the river to achieve moksha, liberation from the cycle of life and death.

The mountain town of Gangotri is a popular place to pay homage to the Goddes Ganga; according to legend, it is where Lord Shiva released the Ganges from a lock of his hair. Many pilgrims flock to Gangotri for this reason but my partner and I had come on a pilgrimage of a different sort. For us, it was the mountains that beckoned. We shouldered our hiking packs and set off for the trailhead across town.

A charming path led us across Gangotri, a small cluster of pastel buildings and winding passageways. The town technically straddles the Bhagirathi River, which becomes the Ganges as it flows further south. Perched at an altitude of 3,415 meters, Gangotri is a gateway into the Garhwal Himalayas. At that altitude, a short walk is enough to leave one panting.

The path carried us over a modest bridge and past two young girls carrying tiffin boxes. Stalls and merchants suddenly materialized on either side. Vendors called out to us while a man pushed past with a goat and cart. The market was the heart of town and it was bustling with pilgrims.

A woman wrapped in a delicate sari purchased a vessel to collect water from the sacred Ganges. We followed her through the market, beneath a pointed archway, and past Gangotri Temple. The woman knelt by the river and zealously filled her souvenir jug with sacred water. Around her, other sari-clad women walked into the chilly waters and immersed in their bathing rituals, while a bearded sadhu cloaked in gold dipped his feet.

Gangotri Temple, the focal point of the city, was built by devotees in the 18th-century. It stood starkly white against the gentle ebb and flow of vibrant saris as we climbed a steep flight of steps, starting our pilgrimage to the source of the Ganges.

Playing by the Rules

The Ganges begins at the Gaumukh Glacier, located 18 kilometres from Gangotri. The route is comprised of a rocky but well-trodden path that traces the river directly to its source. It is possible to stop and rest along the way, but rooms with beds and blankets can be found in Bhojwasa (14 kilometres from Gangotri). Though we shared the trail with Hindu pilgrims heading to Gaumukh, we planned to go further and camp at the base of a 6,600-metre peak called Meru. Meru is a striking shark tooth-like formation that very few mountaineers have conquered; we wanted to camp in its shadow.

We did not expect to meet our biggest hurdle at the trailhead entrance. The moment we mentioned Meru base, the official shook his head firmly. No. Can’t go. Apparently, those without mountain guides are not permitted beyond Gaumukh Glacier.

We tried earnestly to explain that we had over a decade of trekking experience between us. We presented our map and compass then unpacked our bags to show that we were properly equipped. No. He would not award a permit to Meru if we did not hire a guide, but venturing into the wilderness independently was the whole point for us. In the end, we paid for permits to Gaumukh and walked on fuming.

Greetings From a Roaming Baba

I was in a sour mood and lightheaded from the altitude. We stopped for water just as a baba (holy man) strode past. Namaste, he greeted. Namaste, I said in return. As he marched off towards enlightenment, orange robe fluttering over bare feet, I reveled in the simple joy of exchanging that greeting. Namaste means the divine in me bows to the divine in you. I was suddenly overcome with gratitude.

We walked all day, the landscape shifting into new and marvelous shapes as we rounded each bend. We passed fellow hikers, porters, and caravans of pilgrims straddling donkeys (including one overloaded fellow with a Louis Vuitton suitcase strapped to its back).

My legs were shattered by the time we summited the last incline but it was worth the effort. The ground fell away into a wide glacial valley and rose into magnificent twin peaks, Parbat I and Parbat II.

Though accommodation is available for a few dollars, we chose a secluded campsite on the edge of the river and lost ourselves in the familiar rhythm of pitching our tiny tent. Each time I’d look over my shoulder at the mighty Parbats, the setting sun illuminated a different feature. We cooked dinner as a scattering of stars fell over our campsite and stargazed for as long as we could before retreating into our warm cocoon.

The next day, we walked the four kilometres to Gaumukh Glacier. The ice that forms the mouth of the Ganges looked more like teeth. A rock slide had changed the course of the river and the usual foot crossing had vanished, leaving a party of mountaineers stranded on the far shore. A rescue party arrived with brightly coloured ropes; eventually, everyone was safe and we had a glaring reason not to cross the river towards Meru. With a force of nature standing in the way of our pilgrimage, it all became easier to accept.

Further comfort arrived in the form of hot daal. We accepted an invitation to dinner at the ashram in Bhojwasa, where monks laid long burlap runners and tin plates on the ground. Hikers, pilgrims, and monks alike sat cross-legged on the dirt floor as crimson-robed hosts circulated with steaming buckets of daal and rice, doling out generous portions. I was grateful for the heartwarming food and unexpected hospitality, for that gathering of strangers, and for every moment that had unfolded on our trek — even the chorus of burps that signified the end of the meal.

We broke camp and started back towards Gangotri the next morning. This time, I was entirely dedicated to being present throughout the walk. Though our trek did not go as planned, we completed the sacred pilgrimage to Gaumukh as has been done for centuries.

I was utterly content with our adventure, yet the universe works in mysterious ways. We stopped for water along the trail and I glanced over my shoulder. I noticed a shark fin in the distance, through a tiny sliver between two grand peaks. I consulted the topographic map in disbelief. Indeed, it was the tip of Meru, and it was more than enough.