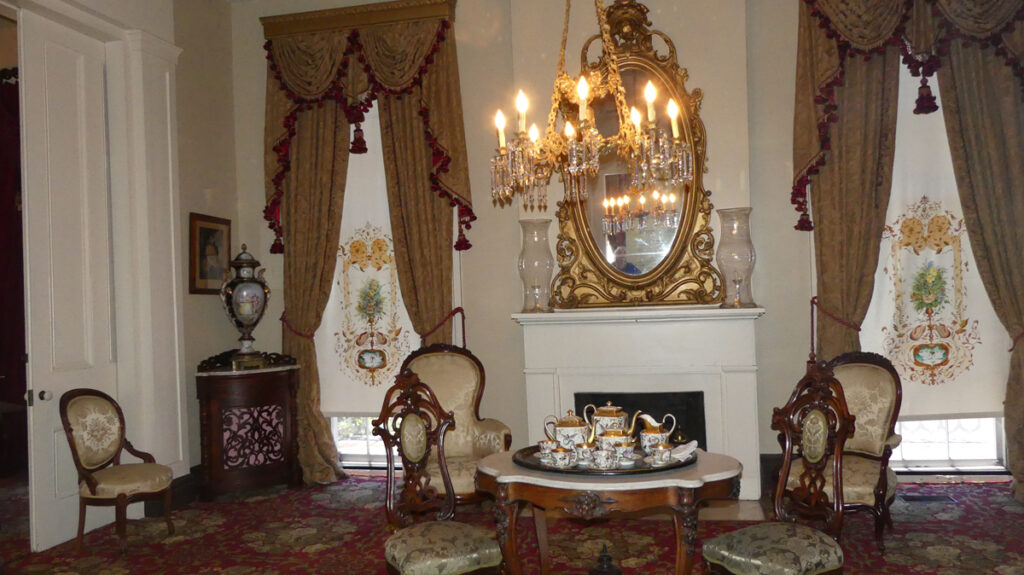 Step back in time as you walk through Old Alabama Town—a living history museum that reflects late 19th and early 20th century life along six-blocks of downtown Montgomery.  Within the six-block radius of Old Alabama Town you can visit 50 recreated buildings that reflect the time and see the “residents and workers” going about everyday lives of their era.  As you travel back in time you’ll experience the three different sections of Old Alabama Town that are known as the Working Block, the Living Block, and the Street Section.

Three blocks of Old Alabama Town comprise the working section where artisans, blacksmiths, millers, and musicians plied their trade. Most of the time, re-enactors are there showing off their town.

You enter the working block section by way of the Rose-Morris House—one of the few remaining I-houses in the state. Mr. Rose purchased the land from the government in 1841 after the Indian Removal Act in the 1830s. He built the two-story house around 1850s with two porches and an open dogtrot in the middle to keep it cool.

As you continue walking you’ll pass the Oliver Cotton Gin which dates back to 1900. The sign above the old wood gin says Continental Gin Company, the company that built it around 1900. It was originally Teasley’s Mill in southeastern Montgomery County. You’ll see a green wagon with large red wheels and slatted sides that’s filled with cotton, much as it would have been back then. There’s a model horse hitched to the wagon ready to pull out so the next wagon could enter and load their ginned cotton. Inside, the restored gin is ready to process more cotton.

A blacksmith was the backbone of every community in the 1800s. They not only kept the wagons rolling, they made many things used in everyday life, tools like axes and hoes, household utensils, and nails. Old Alabama Town’s shop was originally Daniel Webster Boatwright’s that he operated in the town of Fleahop in Elmore County. He started it in 1893 and the shop remained in operation until the 1940s. When you visit today, there might be a smithy making some needed tool at that forge.

Within the working block you can also find a gristmill that came from Randolph County, Alabama. There was a time you didn’t walk into a supermarket and pick up a bag of cornmeal or flour. It was all grown locally. James Canary Green opened this mill in the early 1900s, and his family operated it until the 1950s.

There’s an old Drug Store Museum where you visualize a pharmacist mixing up a foul-tasting concoction to cure whatever and a print shop that exhibits the equipment and tools used for printing pamphlets, newspapers, and other materials to help keep the public informed.

When you move to the living block, you see people go about their everyday lives. Stop in a classroom and watch a child learn reading, writing, and arithmetic. Then there were desks with inkwells and slates, no computers or tablets.

Lucas Tavern is the oldest of Old Alabama Town’s buildings, circa 1818. It started as a two-room dogtrot when the Lucas family bought it. They added on two additional rooms and enclosed the dogtrot. Taverns of that time were not the bars as we think of them today. They were where road-weary travelers went for food and shelter, as well as drinks. The additional rooms gave the Lucases a dining room that had access to their outside kitchen. The tavern once stood on the Old Federal Road, the major connection between Washington D.C. and New Orleans about 15 miles east of Montgomery. Taverns like this were located approximately 15 miles apart, an average day’s walk. Many travelers stayed at Lucas Tavern, including Marquis de Lafayette, who stopped over on April 25, 1825, en route to Montgomery.

Every town needed a doctor. Unlike today they were independent operators, made house calls, served as dentists, and sometimes veterinarians, and often were paid in chickens or eggs. The tiny frame Doctor Office building in the living block was built by Dr. Thomas David in Fleta, Alabama, just south of Montgomery in 1938 in his parents’ backyard. H worked out of the building all his life. In those long-gone days, a sick person got treated whether they had money or insurance. Ever wish you could go back to that more peaceful time?

The corner grocery store was a necessity before the arrival of larger chain stores. In the living block you’ll see Daniel O’Leary’s Grocery and Saloon circa. 1892. O’Leary’s soon dropped the saloon and became just the local grocery store.

Churches were more than a place of worship because members used them for meeting and social gatherings. One of the more prominent churches is the circa. 1885  First Colored Presbyterian Church of Montgomery. Before this church was built, whites and African Americans worshiped together in Montgomery’s First Presbyterian Church.

The third section, called the Street Block, has historic building that are recycled and in use today. Some are now bed and breakfasts. Many serve other uses, like Shaffer Garden which is filled with native plants that would have been grown in a 19th century central Alabama garden.

Another building, the Ordeman-Shaw House was built in the early 1850s. The Mitchell family, cotton planters from Mount Meigs, purchased the townhouse and shuttled back and forth between their two plantation and the city.  In the back of the house there is a kitchen and enslaved people’s quarters along with a laundry, storage rooms, necessaries, barn, and carriage house. The well in the backyard would have furnished water. The two upper floors, which were the living quarters, had fourteen-foot ceilings and large windows for air circulation. It’s furnished much as it would have been when the Mitchells’ lived there in the late 1850s. You can take a guided tour of the house and outbuildings.