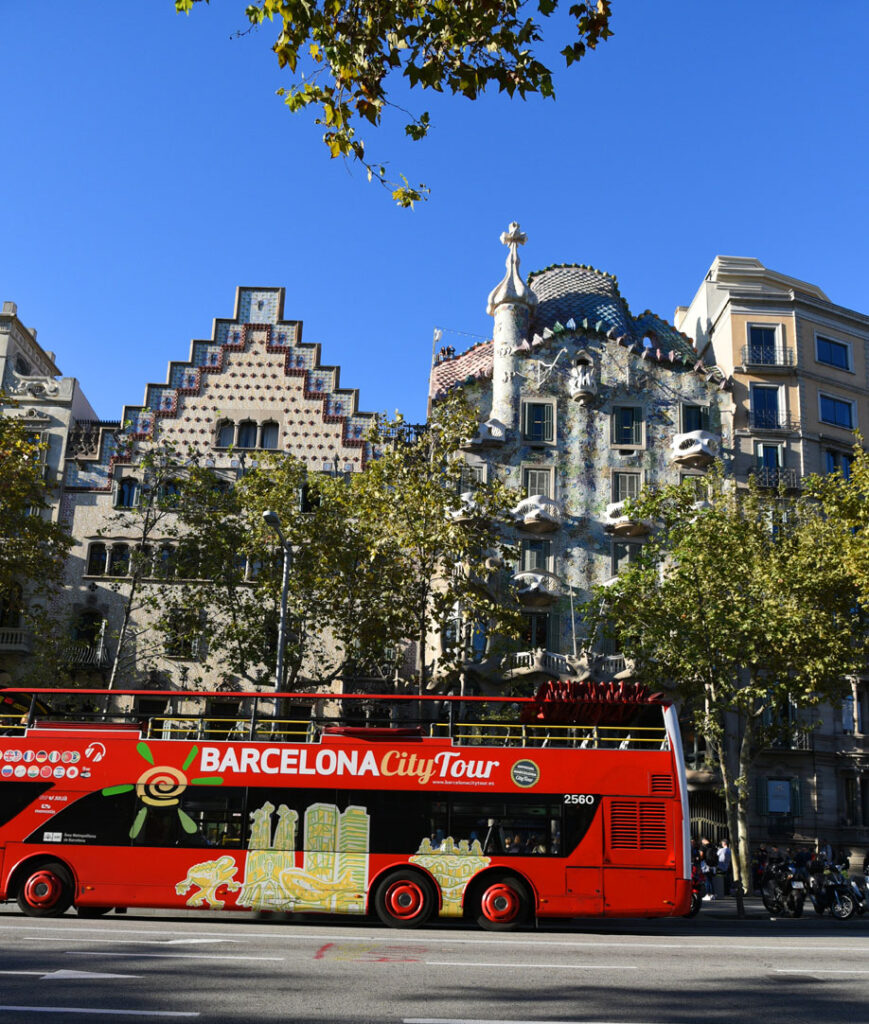 The Spanish city of Barcelona had been Antoni Gaudi’s canvas and muse, at once. The 19th-century architect-wizard used the entire Catalonian city to express his creative genius and seamlessly blended the Gothic and the French Art-Nouveau with Expressionism to create his architectural masterpieces.

The proverbial Gaudi trail starts at La Sagrada Familia, the maverick maestro’s most ambitious project. Gaudi, who was a staunch Catholic wanted to visually chronicle historical events in the Bible through his masterpiece where he conceived eighteen towers; one each for the twelve apostles of Christ, four for the evangelists, one for Mother Mary, and the last for Jesus himself. However, La Sagrada Familia simply defies everything in the history of Cathedral architecture. The abstract, colossal facade with its towers reaching for the sky had drawn much flak and criticism. George Orwell, the celebrated novelist, had dubbed it “one of the most hideous buildings in the world”. Salvador Dalí had said Sagrada Familia possessed a “terrifying and edible beauty”, and opined that it should be kept under a glass dome.

And the façade does not even prepare you for the whimsical symphony of ceramics, stained glass, wrought ironwork forging, and carpentry in the bizarrely innovative interiors with twisted, tree-trunk-like columns, spiral staircases, and dazzlingly kaleidoscopic vaulted ceiling.  When the slant rays of the sun stream through the stained glass windows in late afternoons, La Sagrada Familia turns ethereally beautiful, especially if it is overflowing with church music.

A naturalist to the core, Antoni Gaudi famously said: “There are no straight lines or sharp corners in nature. Therefore, buildings in Barcelona must have no straight lines or sharp corners.” And nowhere is this more evident than in Casa Batllo, one of Gaudi’s most famous architectural creations. A UNESCO World Heritage site and a Barcelona icon, the façade of Casa Batllo look like it has been made from skulls and bones and the natives of the city call it Casa dels ossos (House of Bones) for its visceral, organic appearance.  The “skulls” are the balconies and the “bones” are the supporting pillars.

Commissioned by wealthy aristocrat Josep Batllo, Gaudi redesigned a previously built house in 1904 in Barcelona and Casa Batllo has undergone several redesigns and refurbishments since then. The exterior is designed with a multi-hued mosaic made with broken ceramic tiles and the arched roof resembles the back of a dragon. The irregular and differently-sized windows were designed in an ingenious way to ensure uniform ambient light in each room of the house. Skylights resembling tortoise shells, vaulted walls in varying curves and the unique ribcage design of the loft that contains a series of sixty catenary arches make this house look straight out of a hallucinated dream. The roof terrace, decorated with four chimney stacks, commands a partial view of the La Sagrada Familia, with its spires visible over newer buildings. And it is worthwhile to keep a few minutes of your explorations of the vibrant Eixample district at night,   to watch Casa Batllo when it is illuminated.

Originally intended to be erected as a dedication to Virgin Mary, Casa Mila was the second building in Barcelona that Gaudi commissioned on the busy La Passeig de Gràcia, along with Casa Batllo in the first decade of the 20th century. But the owner Pere Milà i Camps thought it would be a bit risky to have any religious references associated with this avant-garde piece of art. The architecture bears the signature stamp of Gaudi’s raw creativity with its series of curvy, cavern-shaped wrought iron balconies jutting across the façade – a harmonious mass of 6000 stone blocks. The stone façade earned Casa Mila the nickname La Pedrera (Stone Quarry). The interiors also bear the hallmark of Gaudi’s inimitable style with breezy courtyards, ornate ceilings, and undulating tapestries, but the most impressive part is the roof terrace that feels like an open-air museum with its chimneys and ventilation towers resembling abstract sculptures.

Completed in 1900 for Count Eusebi Guell, Park Guell was initially estimated to house sixty luxury plots for elite Barcelonans, perched amid a Gaudi-style landscaped garden, commanding sweeping views of the Catalan capital. However, only two houses were built, one of which became Gaudi’s own residence. Eccentric stone structures, organic and elemental designs, and buildings with the “trencadis” (surfaces covered with irregular ceramic pieces) underscore Antoni Gaudi’s signature style at Park Guell, a leafy expanse of green on Carmel Hill strewn with mosaic features. The iconic Gaudi dragon, covered in mosaics, fronts a colonnaded hypostyle hall that features an ingenious way of rainwater harvesting. The terrace with serpentine shapes is quite the perfect place for an iconic view of the city rolling out before you in myriad shapes and colors, with the Gaudi creations forming a surreal foreground. Located at one of the Parc Guell’s entrances, the Gaudí House-Museum which was the artist’s residence for almost two decades before his death in 1925 features a quirky collection of furniture and objects designed by himself.

While the quintessential Gaudi trail can be covered with these four of his most famous creations, for a true Gaudi aficionado, Casa Vicens in the Gràcia neighborhood of Barcelona can be another pit stop. Constructed in the 1880s during the earliest phase of Gaudi’s career, this is considered to be his first foray into modernism. The melange of rainbow hues, the angular exterior, and the oriental and Moorish elements delicately woven into the architectural style collectively point towards a genius in the making, whom many of his peers and contemporaries held with disdain; but who is now heralded as a maverick maestro in the history of architecture.