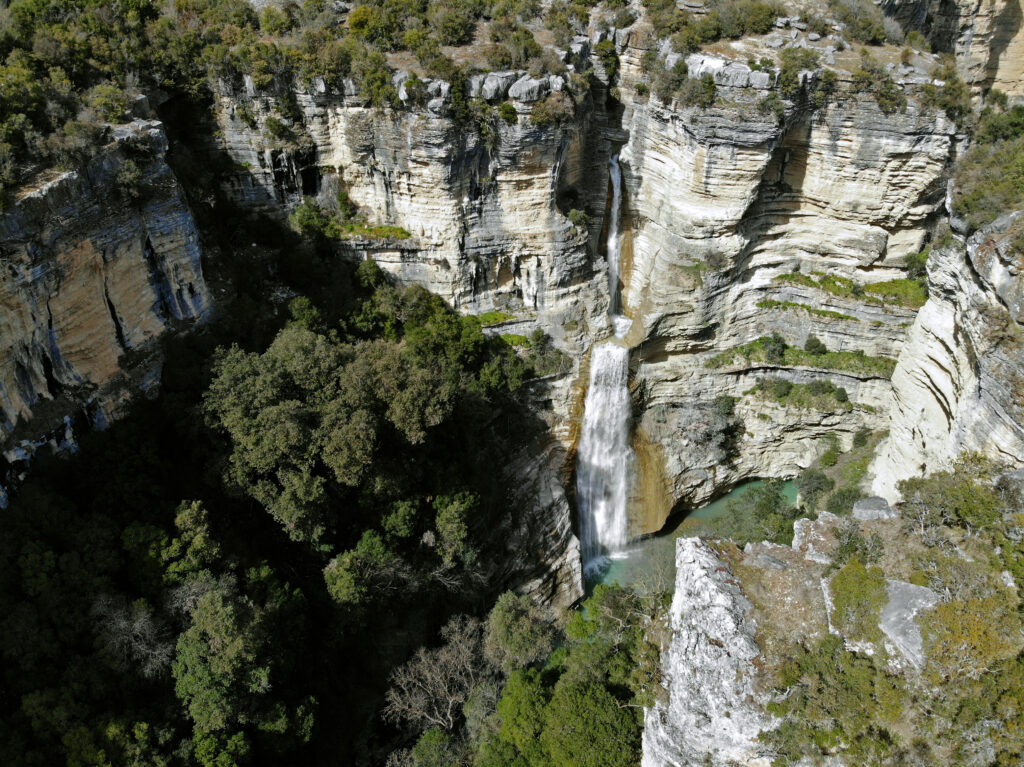 During my road trip through the beautiful Balkan country of Albania, one specific destination was “number one” on my itinerary: Osum Canyon. In fact, my entire trip was inspired and initiated only by the desire to take photographs of this breath-taking natural attraction.

Osum Canyon is a 26 km (16 miles) long river gorge in southern Albania with an unusual ecosystem, which not only preserves the beautiful Mediterranean greenery all year around, but also features several waterfalls, underground passages, and even unexplored caves formed over 2 million years ago by water erosion.

Getting to Osum Canyon is adventurous

Getting to Osum Canyon is an easy 3-hour trip from Albania’s capital, Tirana. However, the rapidly forming poor street conditions can make the trip a bit challenging. Coming from the south, led us through a small city called Corovoda, which is considered the official entrance to the canyon.

As I got closer to Corovoda, I could already spot the Osum river to my right, gently making its way into rocky cliffs rising in the far distance. Once I reached the centre of the city, it only took me 10 more minutes to reach my guest house, which I chose due to its breath-taking location right on the edge of the canyon.

Although the pictures of this guest house looked insanely unreal, this was nothing compared to what it looked like in real life. With my mouth open, I stepped into a little picknick area in the backyard of the guesthouse while, at the same time, slowing down as I was walking towards the edge of the stony surface I was walking on.

Off-season in Albania can be very frosty

It was freezing cold when I woke up at 8 AM the next morning. Sure, I was fully aware March is not considered main season in Albania, but ending up in a room that had not seen guests or, more precisely, a running heater in over 4 months was a little unexpected. Although I had turned the temperature up to its maximum when going to bed, the heater was unable keep up with the outside temperature penetrating the ice-cold walls.

If you plan to go to Albania, I would highly recommend not traveling during off-season. For one thing almost no hotels are open. In fact, some of the places I stayed opened just for me. This may sound awesome at first, but in reality, it is not. You end up with no hot water, no infrastructure or breakfast. Just a room to sleep in. Even in some of the 4-star hotels. However, the frosty memories of the night quickly disappeared as I got ready to head out to finally see Osum Canyon.

Room with a view

Located right on top of Osum Canyon, the view I got when stepping out into the backyard was worth the nightly suffering. A little platform behind the building gave me a perfect idea of what to expect during my upcoming journey. I found myself standing right at the edge of the canyon. In front of me, a scary 90-degree drop (and yes, I am afraid of hights). After receiving both a small local breakfast and some general instruction from my host, I made my way towards a nearby place that should give me the chance to enter Osum Canyon by foot.

The way to my entrance point wasn’t very long. In theory at least. Due to an unexpected appearance of about 30 sheep, which blocked the narrow street, my 5-mile drive didn’t take 15 but instead took 45 minutes. Once I could pass the woolly companions, I reached my destination in no time.

Small stones, washed smooth by the rivers’ strong winter water, covered the wide entrance to Osum Canyon. Thanks to my host, I knew there was a hidden gem to discover nearby. Instead of heading right and alongside the stream of water into the canyon, I turned left and continued hiking a small stony area towards the most remote and picturesque wooden bridge I have ever seen: Ura E Vjeter E Zaberzanit.

The small, lobsided, and quite unstable overpass was beautifully incorporated into the stunning surrounding landscape. I took a deep breath and carefully made my way to the center of the bridge, which connected the two sides of Osum Canyon. This was also the narrowest part of the entire canyon with the smallest distance between the two rocky cliffs.

Once done photo-shooting the worlds cutest bridge, I made my way into Osum Canyon. Unfortunately, I couldn’t fully enter the canyon due to the water level. It wasn’t too high, but still made it impossible to hike all along the stream as I had desired. Keeping my attitude positive, I still enjoyed every moment. The riverbed formations, the cliffs majestically rising up high into the blue skies, the nature sounds, and the water’s color. I had it all to myself. That was my reward traveling off-season.

When I noticed I couldn’t walk any further inside the canyon, I made my way back to the car and decided to move along the street that followed the canyon. Many parking lots along the way allowed me to have a look at the spectacular natural formations from uncountable angles. Each perspective was better than the last.

I stood on the far edge of the cliff, holding onto the handrails in front of me, closed my eyes, and focused on the sounds of wind and fluttering leaves from the trees surrounding me. Suddenly, the wind stopped. What I now noticed was a wind-like sound right below me in the canyon. I couldn’t see anything but was sure there had to be a waterfall right underneath me.

Instantly, I prepared my drone and sent it down the canyon. Just as expected, there was an amazing waterfall dropping down into the river. I assumed it was there, but never did I ever imagine its dimensions. As I flew the drone through the canyon, I even spotted multiple hidden waterfalls. Some thin and elegant, others wide and massive. If not for my batteries running out, I would probably still be standing there taking pictures right now.

A few hundred pictures and 4 dead drone batteries later, I headed back to my car to start my 3-hour journey back to Albania’s capital, Tirana. Once more, a relatively unusual travel destination had welcomed me with nothing but hospitality and natural beauty. I kept thinking about my day as I slowly made my way home through the curvy streets leading over Albania’s mountains. Balkan countries are always worth the trip for those who seek isolation and nature combined with a bit of adventure.