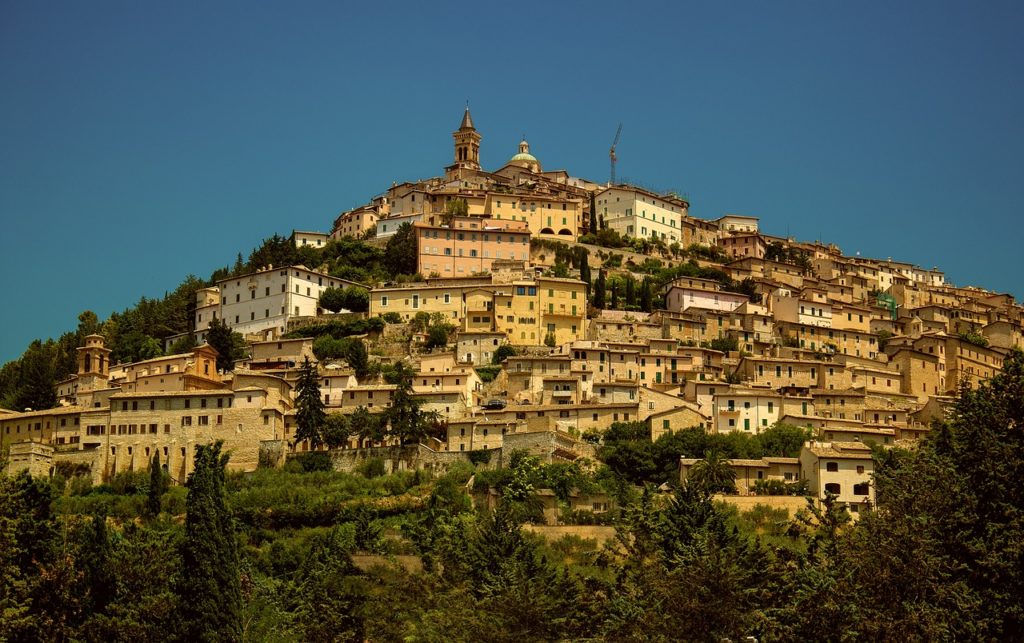 Perugia’s lively historic center, filled with ancient stately buildings, can take your breath away. The Piazza IV Novembre is larger than most Italian hill towns’ main squares, with a large central fountain surrounded by Perugia’s foremost cathedral and medieval city hall. The city itself is a work of art, with staircases, archways, alleyways and piazzas supplying enough architectural eye candy to keep a traveler happy for days.

Perugia’s principal commercial thoroughfare, the Corso Vannucci, named after one of the city’s native sons, the painter Il Perugino, is packed on weekend nights. There are couples with their babies in strollers, university professors, and crowds of students walking, talking, gesticulating, arguing and laughing. During one of the festivals the city is famous for hosting, the Corso becomes a crowded cocktail party, as festivalgoers vie for space and seats at the café tables in the middle of the pedestrian street.

Those vibrant pedestrian streets are what make Perugia appealing, but they are one of the city’s problems, too. Look closely and you’ll see signs of economic distress. The upscale Fagioli clothing store is closing soon. So is the Benetton, for years a dependable anchor on the street. In fact, Perugia’s historic center is filled with stores that are closing, empty storefronts, and “for rent signs.”

Perugia isn’t alone. Many European cities are struggling to find a balance between keeping their historic centers walkable and car-free on one hand, and vibrant commercially on the other. Some, like Florence, have become a sort of Italianate Disneyland, with snack bars and gelato shops replacing the services that once served residents.

In Perugia’s case, its residents have fled their cramped and old apartments in the center leading to a population decline from about 40,000 in the early 1970s to about 9,000 today. Many have moved to newer neighborhoods outside the walls, where modern apartment buildings and houses have taken over from olive groves and grapevines.

Jobs have moved outside the old Etruscan and medieval walls, too. Big employers like the chocolate maker Perugina and women’s clothing manufacturer Luisa Spagnoli are now located in the suburbs. Most Perugians have abandoned the in-town small supermarkets and fruit and vegetable stands for big markets in the outskirts.

Visitors who want to shop and eat like the Perugini should head for the outskirts of town. In the eastern suburb of Collestrada, you’ll find that most American creation, a shopping mall. The usual designer clothing and cell phone shops (Max Mara, Xara, Vodaphone, etc.) line its two main halls. But the star of the mall is the gigantic IperCoop, a sort of European Wal-Mart. The main difference is that it’s in Italy, where great food is an everyday thing. In fact, much of what’s sold there is comparable to the pricey Eataly markets now popping up in the United States. Here’s a chance to get the cute espresso cup set at discount prices, or the fixings for a great picnic. The Coop’s wine section too beats prestige shops in the U.S. for selection and price.

There are good restaurant choices outside of the city center too. Just a few miles from Perugia and the Collestrada shopping center, lies the little town of Santa Maria degli Angeli. Its large basilica contains one of the treasures of the St. Francis world, the Porziuncola, a tiny chapel where the ascetic saint died. A happier place is via Patrono d’Italia, a street that features a row of restaurants that vary from the rustic to the sleek. Among the former is a good pizzeria, popular with locals, la Nonna Papera. There’s a large bell next to the counter. If you liked your pizza, ring it once. If you really liked it, ring twice. A few doors away is La Sirenetta, which translates to ‘The Little Mermaid.’ It specializes in fish and seafood, a relatively recent favorite among inland Umbrians.

In response to the Perugini’s flight, the city is fighting back. One recent effort to keep people in its old town is the “minimetrò” or people mover, which was designed by the French architect Jean Nouvel, who won the prestigious Pritzker prize for other projects. It brings people from a large parking lot on the outskirts to the heart of the old town. The minimetrò allows the street culture to thrive without the cars so people can enjoy the treasures at Perugia’s center, like the museums and monuments, cafes and restaurants.

One institution that has persevered in Perugia’s center is the Sandri on the Corso; a café that dates from the 19th Century and feels like a Viennese café in miniature. Among other thriving restaurants are the terrific pizza place, Mediterranea, and Osteria A Priori, a farm-to-table cooking restaurant featuring local ingredients, carefully prepared. For an elegant night out, there’s l’Officina, a favorite with Perugia’s intellectual set, it specializes in modernizing traditional Umbrian food.

Unfortunately, the minimetrò hasn’t fully fixed the problem of unifying the two halves of the city. Residents of apartment buildings near it complained about the noise, forcing an early shutdown of the train at 9:30 pm. Restaurant goers from out of town can take the metro up but have to grab a cab or bus for the return trip.

Solving the inner city/outer ring problem is an ongoing debate in Perugia, but the city’s survived bad rule before and its people are among the more creative in Italy when it comes to making a city work for its inhabitants. 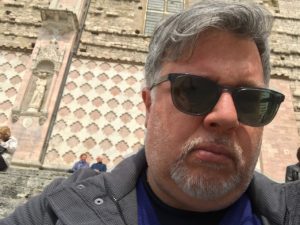 Anthony Paonita is a writer based in New York and Italy. He’s written for More, Business, Reuters, and Business Week about technology, travel, food, and legal affairs.