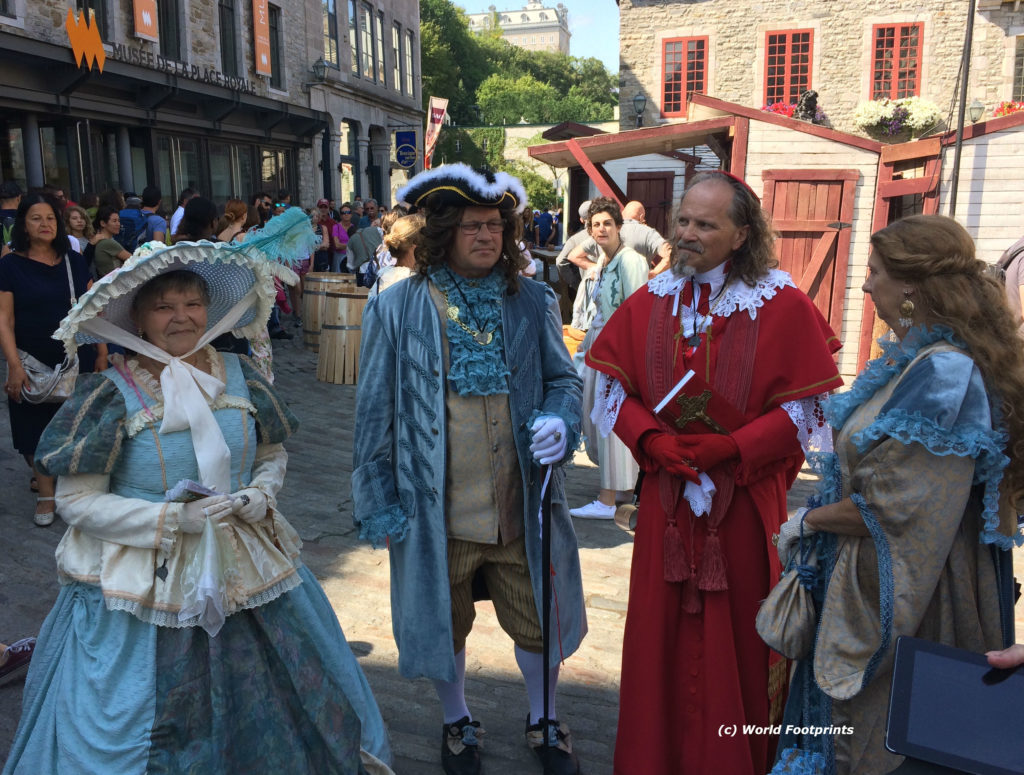 In 1608 the first Europeans set foot on North American soil. Samuel de Champlain, considered to be the founding father of New France, built a settlement that would later be called Quebec City. For the last few decades the arrival of these first French settlers has been celebrated in the heart of Old Quebec every August at the New France Festival (the Fêtes de la Nouvelle-France festival).

The New France Festival is packed with entertainment, food, parades and period costumes reflecting royalty, bourgeois and peasants classes (we selected Bourgeoisie costumes). For a few days, Festival-goers are transported back to the 17th and 18th centuries and given a unique glimpse into the life of early settlers.

During our festival trip we learned about the early discovery of Canada by Jacques Cartier in 1534 and his exploration of the Gulf of St. Lawrence. On a tour of Old Quebec with our period-clad guide we heard that Cartier erected a cross at Gaspé and claimed Canada in the name of the king of France even though the territory was occupied by indigenous people. We learned about the founding of Quebec City by Samuel de Chaplain, the settlement of French colonists, the establishment of the first cities and the conquest of New France by England in 1760, three years after the Treaty of Paris.https://www.worldfootprints.com/quebec-city-new-france-celebrates-heritage-2/

On a tour of a make-shift settlement we learned the art of carving a canoe from tree bark and how to make resin to repair any holes. We saw a demonstration on how to clean a musket and we learned about the countless trials earlier settlers faced; including replenishing their wine barrels.

The Festival was complete with a performance by First Nations people, chamber musicians, a wheel barrel race and lots of food. After a long day of walking in heavy period costumes we settled down for a meal that included poutine, spirits and very large turkey legs.

Thank you Quebec Original for giving us an opportunity to walk in the footsteps of early New France history.