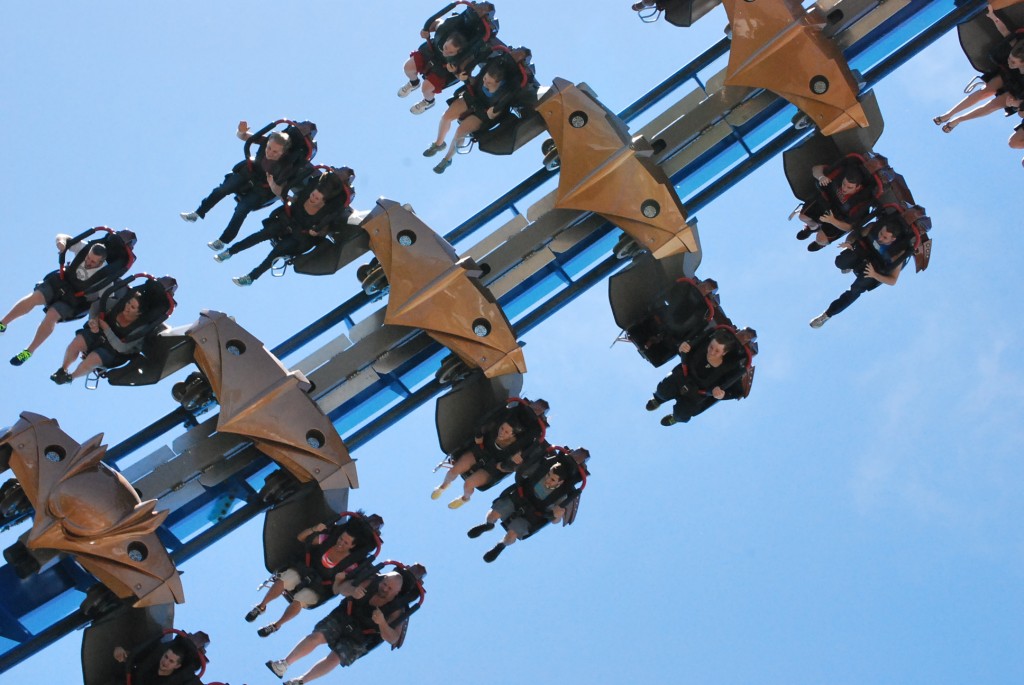 Today World Footprints will go on an American Ride, experience exhilarating thrills and preview a month-long California Wine Festival. Television show host, historian and motorcycle buff Stan Ellsworth breaks the mold of the stereotypical high school history teacher.  A former NFL player, Stan is the Harley Davidson-riding host and creator of BYU-TV’s American Ride.  Join us as we hop on the “iron horse” with Stan as he takes us through American history.

As the author of “America’s Top Roller Coasters and Amusement Parks” Pete Trabucco knows a thing or two about high-speed thrills.  Pete is taking his need for speed and death-defying adventures to the airwaves in a new show, Thrill Ride Maniacs, and he’ll share the best places to enjoy a thrill in America.

With the month of April celebrating Earth Day, California wineries are embarking on a first time, month-long celebration called “Down to Earth Month.”  Gladys Horiuchi of The Wine Institute will preview the month’s festivities and some up and coming wine regions in California.

Stan Ellsworth breaks the mold of a high school history teacher.  The 6’2″, 300lb muscle-clad former NFL player is the Harley Davidson-riding host and creator of BYUtv’s American history program American Ride and web series History and the Highway–two programs that he hopes will inspire the next generation of George Washington and Thomas Jefferson.

Gladys Horiuchi has been Communications Manager for 16 years for the Wine Institute, the largest public policy advocacy group for California wine, representing more than 1,000 wineries at the state, federal and international levels.  Horiuchi has nearly 30 years of experience in communications for the California wine industry.  Besides Wine Institute, she has worked as a communicator for Guild Wineries, Sebastiani Vineyards and a freelance writer for Robert Mondavi Winery, Opus One Winery, Vichon Winery, Byron Winery and Wines & Vines and Practical Winery & Vineyard magazines.  Previously, Horiuchi was in the hospital industry as a communications professional for Sequoia Hospital and Seton Medical Center.  She has a BA degree in English with a teaching credential from the University of Utah.

Born in Staten Island, New York, Pete Trabucco received a degree in English and Speech Theatre Media from Kean University in Union, New Jersey. While at Kean, Trabucco began focusing in broadcast media as a disc jockey and public relations director for the school’s radio station. From December 1989 to June 1995, Trabucco served as Chief of Staff for the N.J. State General Assembly in the 19th and 34th legislative districts. In April 1998, he was hired as regional director with the American Heart Association, where he ran the New Jersey hospital training network and had a hand in lobbying for several health bills including the Automated External Defibrillation bill (PAD), which was signed into law on the federal level in 1999. But the allure of thrill-seeking, adventure and aviation became too powerful for Pete to resist, and he became a licensed private pilot after experiencing the joys of the skies as a Squadron Commander (1990-2000) in the US Air Force, Auxiliary New Jersey Wing Civil Air Patrol program. He was twice awarded the Air Force Chief of Staff Award at the Pentagon. Pete poured that passion for adventure and thrills into his book, “America’s Top Roller Coasters and Amusement Parks,” which was released from Tate Publishing in August 2009. In his book, Pete teaches people how to overcome their fear of roller coasters and lists the best roller coasters and amusement parks around North America.