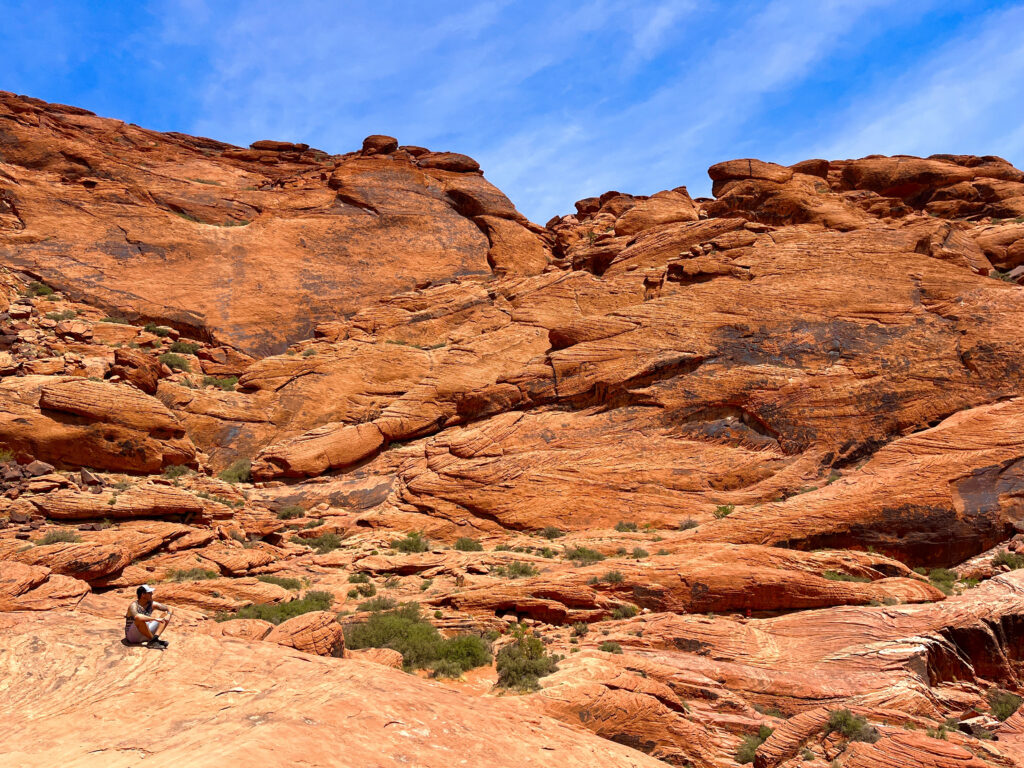 Surrounded by the Mohave Desert, the city of Las Vegas is well known for its overwhelming nightlife and entertainment scene. But what can one do when the sun comes up, streets empty, and polluted air is all that is left? Sure, laying by the pool sounds amazing to cure a hangover. But what’s even better is using the daytime for something more special. For example: Visiting the beautiful Red Rock Canyon, an often-overlooked national conservation area that is located only 15 miles outside Las Vegas and features hiking and trails, plants and wildlife, outstanding geology and camping. All in all, this place is a perfect getaway from the city’s stressful happenings.

Heading out to Red Rock Canyon

After a good night’s sleep, my wife and I found ourselves entering the Red Rock Canyon Park area early in the morning. This is particularly advisable, since temperatures in this area can be brutal, especially during summer. After paying an entrance fee of $15 (per vehicle), we proceeded to get a free map, a cool new hat, and some information about local hiking trails at the nearby visitor center, which also marks the beginning of the one-way 13-miles road that enters the park. As I walked inside the visitor center, I interpreted something to my right side as a huge and lit image of the very red rocks I soon would hopefully see. Once I turned towards it, I realized that there was no painting or fancy image at all. In fact, I stood in front of an oversized window, providing me with the most amazing view of the state parks beauty. This by itself was already worth the trip and my mind was fully blown already!

Impossible to get lost at Red Rock Canyon

After studying the map for a few seconds, I realized something really special about this place. Usually, I have a hard time deciding which way to go and what trail(s) to hike. Not this time! The best thing about this place was its structural layout. Once passing the entrance gate, Red Rock Canyon could only be travelled by means of a 13-miles long one way street, which I didn’t consider just a street, but rather a very beautiful scenic drive. Alongside the well-paved road, frequent parking possibilities were indicated on the map, always located close to each of the hiking trails. Once I arrived the first hiking trail, Calico I, my wife (who was with me that weekend) and I studied the distances and immediately realized that we would impossibly be able to check out multiple trails of Red Rock Canyon that day. Consequently, we decided to only do one trail and take our time rather than rushing through as many different trails as possible.

Underestimating the heat at Calico trail

After I had parked the car and shouldered my backpack, we followed a sign pointing us down a short but somewhat steep decline towards a flat rock that many tourists used as a photo-op. We gladly accepted the offer of an unknown couple to take a picture of us and subsequently left the overrun rock behind us. Surprisingly, I noticed that most people returned right after their photo shooting and almost nobody actually continued to hike the trail.

The hike as such wasn’t demanding in terms of steep inclines, but definitely challenging due to the intense heat. Slowly moving forward in between amazing stone formations, we fought the heat by stopping in every shady area we could find. Not that easy, considering the fact that the sun was at its highest position at this point. What really kept us going despite the high temperature of 35 °C (95 °F) was the sheer beauty of our surroundings. “It really looks like a different planet, like I would imagine Mars” my wife said when we were peacefully sitting on a rock to eat our brunch.

The beauty of the Aztec sandstone cliffs took our breath away

The formation of the sandstones, their colour, their size. Simply breathtaking. Sometimes we were deeply submerged in the majestic rock formations, other times we were walking besides them with an unobstructed view of the valley to our left. After every corner, there was another reason to stop for new pictures. The Aztec sandstone cliffs were so unbelievably beautiful and presented so many variations. Especially when looking at it through the perspective of my drone, I noticed how small and insignificant my wife and I looked compared to the massive landscape.

After hiking 2 miles from Calico I to Calico II, which was the second stop along the scenic drive, we took a right turn and hiked towards the inside of a rocky area. After a few minutes, hiking turned into climbing large boulders, demanding all our energy. Although this route was not officially considered a trail, it turned out to be the best part of our journey. Deep inside the high-rising cliffs around us, we spotted some beautiful sandstone erosions that immediately reminded me of Antelope Canyon in Arizona.

After having a late romantic lunch under the shelter of a stony overhang, we slowly made our way back to the parking lot of Calico I. At around 4:40 PM, we didn’t only leave with amazing memories but also with our hiking map and a promise to return to Red Rock Canyon as soon as possible. After all, with one hike down, there are still 25 more to go!