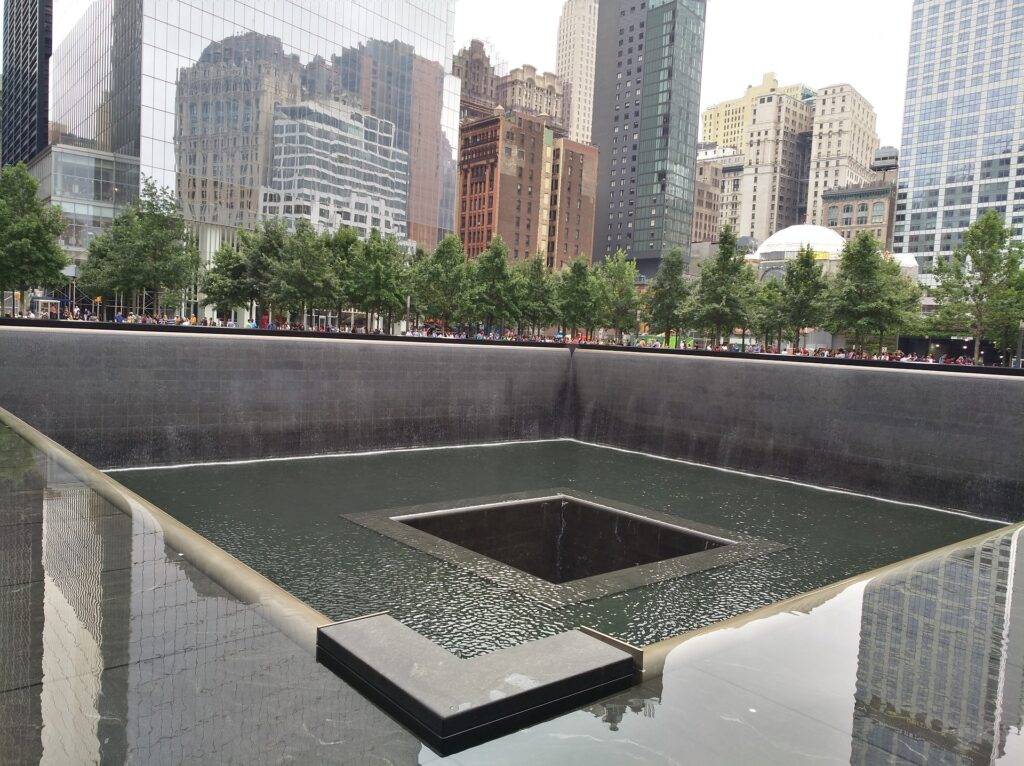 I’ll never forget the bright blue skies as I watched an airplane fly into the World Trade Center’s North Tower at 8:46 a.m. on September 11, 2001. The blue sky remained as the South Tower met the same fate at 9:03 a.m. At that moment we knew—this was no accident.

News reports flooded the airwaves. It was also happening just outside Washington D.C.: the Pentagon was hit. Finally, we learned a fourth plane crashed into a field in rural Pennsylvania as heroic passengers took control to prevent further casualties. Nearly 3,000 people died that morning under those blue skies. Forever changed, Americans and our allies around the world watched in horror and disbelief.

New York City wasn’t my home in 2001. At the time, I lived in Orlando and watched these events unfold on my desktop computer after a friend called and said, “Log in to CNN, a plane crashed into the World Trade Center.” It was the same friend that had traveled with me to New York the previous summer. We considered going to the top of the World Trade Center while there but decided to save it for another day. That day never came.

I moved to New York seven years after the terrorists destroyed life and property in the city. Over the years, my New York friends shared stories of their memories of that fateful day. I met my husband in this city a few years after I moved here. A train operator for the New York City subways, the sights, sounds and smells of that day and the months and years that followed are permanently etched in his memory.

None of us will ever forget. We won’t forget the scenes of massive buildings collapsing into piles of rubble, of smoke billowing through the streets of lower Manhattan and of thousands of missing person flyers displayed by desperate loved ones. We won’t forget the gaping hole in the side of the Pentagon. And we’ll never forget the recordings of passengers on Flight 93 saying, “Let’s Roll!”

All of these memories are honored at the country’s three museums dedicated to the events of September 11th. Each shares a unique perspective on the events the unfolded under that bright blue sky.

Passengers and crew members stormed the cockpit of United Flight 93 the morning of September 11th to prevent a potential attack on the U.S. Capitol. The plane crashed into a field in Somerset County, Pennsylvania. Everyone on board perished. Today the heroic efforts of those brave souls are documented and honored at the Flight 93 National Memorial.

Near the entrance, a landmark Tower of Voices stands 93-feet high and holds 40 wind-activated chimes—a visual and audible living memorial to the 40 crew members and passengers. An angular walkway marking the aircraft’s flight path leads to a glass railing overlooking the aircraft debris field below. Only family members are permitted beyond the gated area to the point of impact. There, a white marble Wall of Names stands near a large boulder marking the crash site.

Inside the Visitor Center, artifacts tell the story of that fateful morning. The reality of the intensity of those final moments before the crash comes to life at the wall of phones. Here visitors can listen to messages left by the passengers and crew members for their loved ones on answering machines. I will never forget the voice of flight attendant CeeCee Lyles as she calmly delivered an emotional farewell to her husband.

An aircraft struck the Pentagon at 9:37 a.m. killing 184 people. Situated on two acres outside the Pentagon where the tragedy occurred, the Pentagon Memorial features 184 memorial benches dedicated to each of the victims. The cantilevered benches engraved with each victim’s name feature lighted pools of flowing water. The organization of the benches chronicles the ages of the victims from 3-year-old Dana Falkenberg to 71-year-old John Yamnicky.

Benches for the 59 passengers face the sky while those dedicated to victims inside the Pentagon face the building. The moving display plays out again on the Age Wall, which increases in height to represent the victims’ ages from 3 to 71 inches. Maple tree clusters and ornamental grasses create a park-like environment. Audio tour guides are available to provide additional information.

Note: Although the memorial is typically open 24 hours a day, seven days a week, it is temporarily closed due to COVID concerns.

Twisted beams of steel from the collapsed towers, a mangled FDNY fire truck, the survivors’ staircase and hundreds of heart-wrenching personal mementos exist among the 10,000 artifacts inside the 9/11 Museum in New York. Personal stories shared by the families of survivors remind us that each person was like us—someone going about their day as planned.

Is it sad? Yes, of course. But story after story of first responders, volunteers and the amazing dogs responsible for search and rescue reminds us of the heroes from this tragic event. The museum honors the fallen and those who tried to save them with dignity and grace.

Outside the 9/11 Memorial reflecting pools mark the footprints of the North and South Towers. Descending 30 feet into a square basin, the pools contain the largest manmade waterfalls in North America. From the basin, the water drops another 20 feet disappearing into a central void. Architect Michael Arad’s design represents “absence made visible” as the pools represent voids that will never be filled. Etched into the fountains are the names of each person who perished in Twin Towers during the September 11th attack and the 1993 bombing.

Heroes Live Among Us

The terrorist attacks of September 11th brought us much sorrow, but it also illuminated the many heroes that live among us. First responders risked everything to save lives that day and in search and rescue efforts in the weeks that followed.

Strangers from around the world volunteered resources and time to do whatever possible to help those directly impacted by these horrific events. There was a sense of unity throughout the country—unity born from desperation.

As the 20th anniversary of this unimaginable day arrives, let’s never forget the importance of honoring those we lost, paying tribute to the heroes and remembering the good that comes from unity.